Shang-Chi, Cinderella, Worth, We Need to Do Something and more 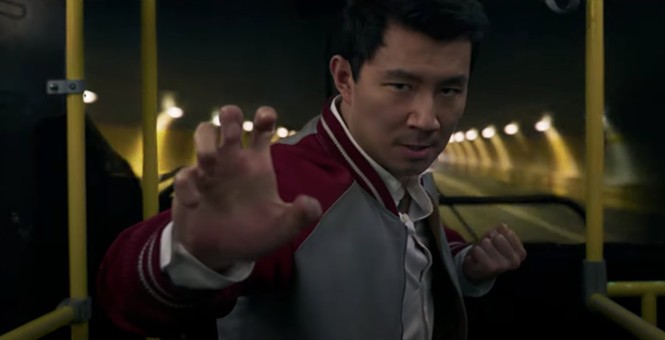 Cinderella **
There’s a level on which on want to give points to this latest adaptation of the oft-told fairy tale for the chances it takes, but at some point the chances you take also need to work. In a far-off, long-ago kingdom, Ella (Camila Cabello) is stuck in a life of drudgery with her stepmother (Idina Menzel), dreaming of making her own way as a dress designer. Coincidentally, Prince Robert (Nicholas Galitzine)—the lay-about son of the king (Pierce Brosnan) and queen (Minnie Driver)—is being forced to seek a bride, and sets his eye on the spunky Ella. Many of the familiar touchstones are here, though with just a sideways turn, like Billy Porter working magic as the Fabulous Godmother. But the big swing is making the musical numbers a mix of originals and pop hits ranging from Queen to J.Lo, and as a result the movie never feels like it has an identity as either anchored in our world or something brand new. Meanwhile, making everything here all about dismantling the patriarchy feels like a slick notion, but the execution keeps stumbling by making the gags all self-aware of how backward everyone is in their insistence on traditional gender roles. You do get the pleasure of Menzel’s voice, and a few solid jokes, making it all the more disappointing that the slipper just doesn’t generally fit. Available Sept. 3 in theaters and via Amazon Prime. (PG)

The Gateway **1/2
“Cop on the edge” tropes get reshuffled and served up with a social worker instead, with a rare opportunity for a leading role by the great Shea Whigham. He plays Parker Jode, a St. Louis social services case worker whose own history of an unstable childhood home life has him abusing substances and getting a little too close to his work. That includes his connection to Dahlia (Olivia Munn), a single mother whose life might be turned upside down when her husband (Zach Avery) gets out of prison. Co-writer/director Michele Civetta works overtime to create an atmosphere of corruption and despair around Parker’s efforts to change the world one endangered kid at a time, and perhaps find some measure of peace with his own past. The guts of this thing, though, are pure B-movie material like warring drug dealers and gunplay, which too often feels like it’s wasting an amazing supporting cast—Bruce Dern as Parker’s estranged dad; Frank Grillo as a local crime boss; character actor stalwarts Mark Boone Junior and Keith David. Whigham does get the opportunity to show his chops, but it would be great to see him do it in a story that’s as interested in what’s going on inside his head as it is in when he gets punched in it. Available Sept. 3 at Megaplex Valley Fair and via VOD. (NR)

Shang-Chi and the Legend of the Ten Rings **1/2
Oh, Marvel Studios—you make it so hard to give you credit for doing something different, when you’re also so committed to making everything kind of the same. Director/co-writer Destin Daniel Cretton oversees the story of Shang-Chi (Simu Liu), the son of thousand-year-old Chinese warlord Xu Wenwu (Tony Chiu-Wai Leung) who is pulled back from his simple life in America by his father’s potentially world-threatening obsession. The back-story is fairly dense by MCU standards, involving layers of flashbacks to unfold Shang-Chi’s complicated relationship with his training as a kung-fu assassin, his parentage and his estranged sister (Meng’er Zhang). Most of the first hour, however, proves fairly light on its feet, focusing on snappy martial-arts choreography (by veteran Jackie Chan stunt double Andy Cheng) and entertaining comic relief from Awkwafina as Shang-Chi’s best friend/possible romantic interest. But, Marvel being Marvel, it’s necessary to pull the bigger comic-book universe into the story (with varying degrees of success), and build up to a conclusion that involves a bunch of rampaging CGI beasties as much as it does our central character. While Liu mostly makes for an appealing protagonist, he isn’t really given a chance to dig into Shang-Chi’s hero journey, since it was always destined to end with a teaser for the next episode. Available Sept. 3 in theaters. (PG-13)

Unapologetic **
Maybe I missed the point of Ashley O’Shay’s documentary, but isn’t it an attempt to draw attention to the role of queer women of color in progressive movements? And if so, shouldn’t we be getting a stronger sense of how being queer women of color affects our subjects’ efforts? O’Shay follows two Chicago activists—Janaé Bonsu and Bella Gambrell—as the city’s Black community continues its fight against police violence, including the killing of Rekia Boyd. We get ample information about the passions that drive their daily lives, as Bonsu pursues her doctorate in social work and Gambrell deals with the impact on her life of incarcerated family members. Yet throughout the scenes involving contentious meetings of the Chicago police disciplinary board and street protests, there’s too little that distinguishes this from a dozen other documentaries about determined activists, despite a few token references to the way the Black community wrestles with sexism and homophobia. In a movie theoretically about women whose work is all about their identity, the construction of the narrative too often leaves it feeling like it lacks an identity of its own. Available Sept. 3 via SLFSatHome.org. (NR)

We Need to Do Something ***
Stipulated: It’s one of the lazier forms of criticism to want a film to be an entirely different kind of film than it turns out to be. That said: Yeah, that’s what I’m doing. In the midst of a severe storm warning, a family of four—teenager Melissa (Sierra McCormick), her younger brother Bobby (John James Cronin) and their parents (Pat Healy and Vinessa Shaw)—takes shelter in their home’s bathroom, then find themselves stuck there when a tree falls through their roof and blocks the door. That’s the foundation for a terrific confined-space thriller, which screenwriter Max Booth III spikes with discord as the parents wrestle with their tenuous relationship in the middle of a crisis, and director Sean King O’Grady—a veteran producer directing his first fiction feature—crafts some terrific time-passage montages and unsettling individual shots, while allowing Healy’s performance to go satisfyingly nuts. But as flashbacks of Melissa and her troubled girlfriend (Lisette Alexis) eventually reveal, there’s also a supernatural component to the narrative, and it’s there that the film misses its chance to be a truly remarkable piece of low-budget horror as the backstory remains too murky to be truly disturbing. If you pretend it’s a domestic drama with the stakes ratcheted up, you’ve got something much stronger than it becomes while waiting for a monster to go booga-booga. Available Sept. 3 in theaters and via VOD. (NR)