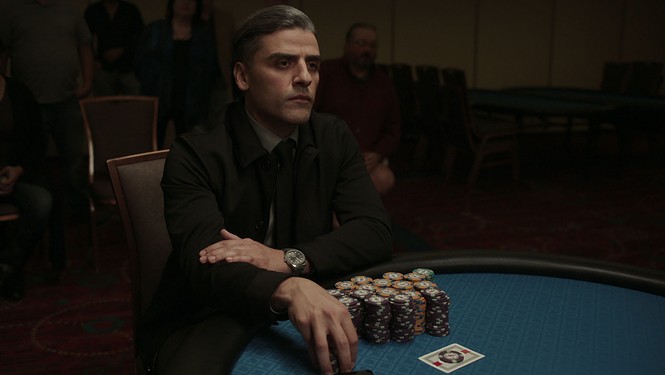 The Alpinist ***
Real talk now: Evaluating character-study documentaries about mountain climbers for me always collides with the amount of time I spend in a semi-fetal position going “oh fuck holy shit aaahhhhhhh noooooooo.” Directors Peter Mortimer (who also narrates) and Nick Rosen spend two years following Marc-André Leclerc, a 23-year-old Canadian climber whose remarkable feats even amaze fellow climbers, including Free Solo subject Alex Honnold. The filmmakers face something of a unique challenge, in that the free-spirited, publicity-shy Leclerc is perpetually ditching them so he can make his landmark climbs truly on his own, and they do a solid job of building his unique personality and its role in the direction his life took into their narrative. But their wisest decision—and most harrowing, to the vertigo-prone—is making the most of the footage they do get of Leclerc plying his trade. At times they swing the camera over his head at times to emphasize the sheer madness of climbing without a rope; at other times, they allow the observation of his technique to play out without music or other dramatization, such that you might simply feel like you’re in the presence of an artist at work. While his fingertips keep him from falling hundreds of feet, you might just be watching through yours. Available Sept. 10 in theaters.

The Card Counter ***
Paul Schrader has spent more than 40 years as a writer and director generally immersed in sin, guilt and shame, so it’s not surprising that he would find material in one of America’s most shameful episodes of the 21st century. Oscar Isaac plays a guy who calls himself William Tell as he travels from casino to casino playing small-stakes blackjack and poker; in an earlier life, however, he was Bill Tillich, an American soldier who tortured prisoners at Abu Ghraib and subsequently spent more than eight years in prison for his crimes. Much of the narrative involves Bill’s friendship with a young man named Cirk (Tye Sheridan) whose dad was also an Abu Ghraib guard, and the surrogate-father relationship takes on a Color of Money-like component that bumps awkwardly at times against the more intense subject matter. Fortunately, Isaac is typically terrific at capturing Bill’s redemption journey, and there’s an intriguing kick to the relationship between him and Tiffany Haddish as the representative for the anonymous investors staking Bill’s bankroll. It’s somewhat surprising to see Schrader end on what feels like a note of hope that lingers through the closing credits, but the strength comes in the filmmaker’s ongoing obsession with what someone might do if they believe it’s the only thing that can save their soul. Available Sept. 10 in theaters. (R)

Final Set ***1/2
Writer/director Quentin Reynaud’s character study is built on some very familiar sports-movie rhythms, but it draws its effectiveness from everything it does to break expectations. Thomas Edison (Alex Lutz) is a 37-year-old professional tennis player, hanging on by his fingernails (and his oft-repaired knee) to a career haunted by never fulfilling the promise of his status as a teenage prodigy. Unable to consider retiring into domestic life with his wife Eve (Ana Girardot) and young son, Thomas makes one potentially last stab at qualifying for the French Open. Naturally, we get some game action with Thomas as underdog, and Reynaud makes terrific editing decisions to convey a shift in momentum, while also knowing when to get use a more impressionistic approach. Better still, he complicates the relationship between Thomas and Eve by making her not just the put-upon wife, but a former player herself whose desire for Thomas to retire is tangled up with the fact that motherhood led her to do so sooner than she might have wanted. Eventually it does come down to a climactic Big Match with the rival set up from the outset, and wide shots that feel exactly like coverage for a TV broadcast. But even then, Reynaud has one final trick up his sleeve as a way of making it clear what Thomas’s journey is—and isn’t—about. Available Sept. 10 via SLFSatHome.org. (NR)

Kate **
Plenty of genre films feel like they’re just pasting together pieces of other, better genre films, leaving you only to hope that it’s done with some style and maybe a little humanity in the performances. There’s maybe a touch of the latter in Mary Elizabeth Winstead’s performance as the title character, an assassin trained since childhood by her shadowy handler (Woody Harrelson), and who finds herself poisoned with a toxic dose of radioactivity and 24 hours to seek vengeance on those behind it. Winstead does a solid job with conveying the weariness in Kate’s life even before she’s a dead woman walking, and wrestling something more than a cliché out of her getting stuck taking care of a young girl (Miku Patricia Martineau). But director Cedric Nicolas-Troyan makes the Japanese locations a huge part of the story, tipping more than occasionally into exoticism and emphasizing Japanese thugs’ particular sense of “honor” and various neon-pastel pop-culture images. And there’s the frustration of hoping that the fight sequences can offer enough creative mayhem that they help you forget that it’s basically a mash-up of D.O.A. and Kill Bill (hint: they generally don’t). Maybe a moratorium on movies about vengeance-seeking badass killers wouldn’t be a terrible idea for a while. Available Sept. 10 via Netflix. (R)

Malignant **1/2
It’s not exactly accurate to call Malignant a “good” movie, but it is 100 percent its own movie. Director James Wan (Saw, The Conjuring) co-created the story (with Ingrid Bisu and Akela Cooper) about a Seattle woman named Madison (Annabelle Wallis) who survives a deadly home invasion only to find that she might share a psychic connection with the killer—a mysterious presence called Gabriel whose dangerous abilities are made manifest in the film’s prologue. The vibe Wan is aiming for here isn’t really scares, as he bypasses images that are genuinely unsettling in favor of a few simple jump scares and a visual style full of craftily-lit interiors and crazy angles, making for a stylish but kinda tedious first hour-plus. And there’s a level on which he almost dares you to have a problem with his embrace of tropes like way-too-big spooky houses and derelict seaside hospitals. Mostly, he wants to set up a third act built on a genuinely nutty reveal—the less said about which, the better, except that it involves CGI blood flowing by the digital bucketfuls. It’s more than slightly absurd that Malignant pretends to care about its character relationships for its climax, but maybe by that point you’ll be too busy with incredulous laughter at the entire concept to notice. Available Sept. 10 in theaters and via HBO Max. (R)

Queenpins **1/2
It’s always a disorienting feeling when you’re watching a movie and the secondary plot-line consistently feels more interesting than the primary plot-line. This loosely-fact-based tale from the writer/director team of Aron Gaudet and Gita Pullapilly focuses on two Phoenix, Ariz. friends—extreme coupon-ers Connie (Kristen Bell) and JoJo (Kirby Howell-Baptiste)—who figure out a way to turn smuggled coupons for free products into a thriving (albeit fraudulent) online business. The script tries hard to build sympathy for our heroines with backstories involving infertility and identity theft, respectively, but the unlikely criminal dynamic never quite takes flight the way it feels like it should. There’s much better material, though, in the attempts by over-zealous grocery store chain loss-prevention expert Ken (Paul Walter Hauser) and postal inspector Simon (Vince Vaughn) to break the case, thanks to two entertaining performances and a classic mismatched pairing. As frustrating as it is to start with the old freeze-frame/“yep that’s me, I bet you’re wondering …”, or get on-the-nose dialogue like Connie’s husband (Joel McHale) telling her about a miscarriage, “You’re trying to replace what we lost with coupons,” at least there’s some weird, goofy stuff on the side that kept making me wonder if we could get an Adventures of Ken & Simon spin-off. Available Sept. 10 in theaters. (R)

Small Engine Repair **1/2
Adapting a play for the screen is no easy task, and in his eagerness to make sure his own 2011 stage piece feels like an actual movie, writer/director John Pollono muddles the dynamic that likely made it work best in that other medium. Pollono also stars as Frank Romanowski, a working-class single dad in Manchester, New Hampshire who basically raised his teenage daughter, Crystal (Ciara Bravo), with his two childhood best friends, Swaino (Jon Bernthal) and Packie (Shea Whigham). A falling-out threatens their decades of friendship, but Frank unexpectedly calls them back together one night for unknown reasons. The play was exclusively a four-hander—the three pals, plus a rich college kid (Spencer House) who shows up at their gathering—and the narrative is at its best when letting those characters explore notions of masculinity and privilege, plus a peer-group status dynamic that feels wonderfully lived-in through the terrific performances. This expanded version, however, brings Crystal and her mother (Jordana Spiro) to the screen, which subtracts more by diluting the testosterone than it adds through fleshing out the relationships. Most frustratingly, Pollono repeatedly takes past events that are being described by characters and shows them, redundantly, as flashbacks—which makes it obvious, when he doesn’t show such a described event, what it’s likely he’s hiding from the audience. When you know that the bones of a story work in a certain way, maybe it’s best to trust that. Available Sept. 10 at Megaplex Jordan Commons. (R)