Venom: Let There Be Carnage, Titane, The Guilty, Addams Family 2 and more 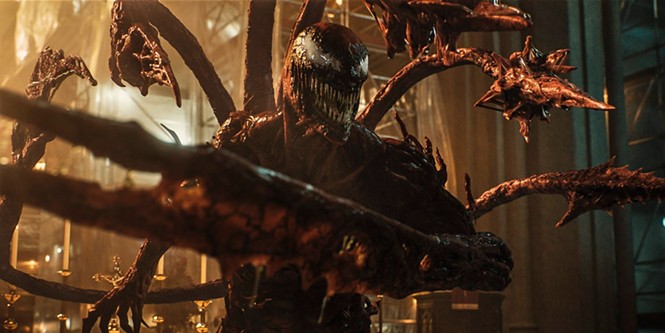 The Addams Family 2 **
Full disclosure: I have not seen the 2019 film that launched this animated franchise version of Charles Addams’ oft-interpreted cartoon family. Yet I feel fairly comfortable that, given the material’s fundamental grounding in individual dark-humored and incongruous gags, I didn’t miss anything crucial to understanding this story, which focuses on the family—Gomez (Oscar Isaac), Morticia (Charlize Theron), Uncle Fester (Nick Kroll), Wednesday (Chloë Grace Moretz) and Pugsley (Javon “Wanna” Walton)—taking a cross-country vacation to dodge someone claiming Wednesday isn’t actually a biological relative. That places this story squarely in the realm of other coming-of-age family stories based on a young person wanting to distance themselves from their family, which is only one of the many ways Addams 2 feels cut from familiar cloth. The animation’s energy level stays high throughout, but the jokes are thin and obvious, with the occasional naughty double-entendre or pop-culture reference to allow grown-ups to feel like there’s something here for them. “The extra ‘d’ in Addams stands for ‘different,’” Gomez notes at one point, but given how much this just feels like plugging a familiar bunch of characters into a 21st-century CGI-animated feature formula, it's more like you’ve seen it before even if you didn’t see The Addams Family 1 before. Available Oct. 1 in theaters and via VOD. (PG)

Falling for Figaro **
What if you put together all of the basic building blocks of a romantic comedy, but forgot to include personalities for the characters? Veteran director Ben Lewin is co-credited for the script (with newcomer Allen Palmer) about Millie Cantwell (Danielle Macdonald), an American fund manager for a London finance firm who gives up her cushy job to pursue her dream of being an opera singer. Leaving behind her boyfriend (Shazad Latif), she heads to a small Scottish village to study with retired diva Meghan Geoffrey-Bishop (Joanna Lumley), and butt heads with Meghan’s sole other student, Max (Hugh Skinner). The premise sets up any number of potential conflicts—Millie as fish-out-of-water; the challenges of Meghan’s abrasive teaching style—all of which would have required giving the participants a modicum of depth. But Millie is eager and nice without any rough edges to sand down, Meghan’s irascibility isn’t accompanied by any real information about her past, and Max’s own ambitions are left completely unexplored. Even the inevitable budding romance between Millie and Max, while commendable for making the plus-sized Millie an object of desire, feels like it appears out of nowhere, and vanishes just as quickly. Right up to the Big Competition that will mark the climax, it’s a good-natured movie full of genre signifiers that just never does the work to make those signifiers … well, sing. Available Oct. 1 in theaters and via VOD. (NR)

The Guilty ***1/2
A claustrophobic, single-setting drama can find a number of ways not to feel like a filmed stage play, and one of them is having a dynamic central performance to anchor it. Adapting a 2018 Danish film, director Antoine Fuqua and screenwriter Nic Pizzolato tell the story of Joe Baylor (Jake Gyllenhaal), an L.A.P.D. officer working 911 dispatch during an active-duty suspension for an initially-unspecified reason. On his last scheduled night, Joe gets a call from Emily (Riley Keough), a woman claiming to have been abducted by her ex-husband (Peter Sarsgaard), setting Joe off on an obsessive quest to save her. Framing the story during a series of Southern California wildfires raises the stakes and provides plausible obstacles for Joe’s efforts, while Fuqua does an effective job of building tension out of unsettling moments that play out entirely on Joe’s end of a phone call. Mostly, though, Fuqua accentuates Gyllenhaal’s work, which captures a certain kind of police mindset—entitled, tightly-wound and utterly convinced that he’s always in the right—that seeps from his pores even when he’s not screaming threats at someone. It’s tremendous work at conveying how Joe isn’t necessarily the good guy in this piece, which makes it a bit disappointing that Pizzolato’s adaptation lets him off the hook a little. The uglier side of Joe Baylor—and Gyllenhaal’s ability to manifest it—is what makes for 90 electric minutes. Available Oct. 1 via Netflix. (R)

The Jesus Music ***
You might be concerned that a documentary about the 50-year history of Christian contemporary music would be just a lot of preaching—and yeah, there is plenty of that—but it’s also a surprisingly insightful, wide-ranging look at a rarely-chronicled component of the American music industry. Christian cinema stalwarts The Erwin Brothers (I Can Only Imagine) take their journey from the early 1970s Southern California “hippie church” Calvary Chapel, and the introduction of counterculture generation components to the formula of traditional church music. From there they touch on the wide range of genres with practitioners embracing Christian themes, from the sparkly 1980s pop of Amy Grant, to the hair-metal of Stryper, to the hip-hop of DC Talk and Kirk Franklin. The talking heads provide insight with far more than a gee-whiz perspective, talking honestly about their own individual failings and challenges from the larger Christian community: hysterical criticism of Christian rock as a wolf-in-sheep’s-clothing threat; judgmental dismissal of artists who stumble; ongoing segregation between White and Black Christian churches. Though the final 25 minutes wanders a bit in trying to bring everything home on an upbeat note, along the way you’ll get a perspective not just on those who celebrate God in song, but how often their obstacles come not from the secular world, but from those who should be most receptive to the message. Available Oct. 1 in theaters. (PG-13)

Titane ***1/2
After 2016’s Raw and this Cannes-honored feature, writer/director Julia Ducournau is cornering the market on a brand of provocative body horror mixed with the consequences of traumatizing childhood experiences. A prologue shows how pre-teen Alexia survives a car accident and winds up with a metal plate in her skull (“titane” is French for “titanium”); as a 30-something, Alexia (Agathe Rousselle) works as a model at car shows, demonstrating some odd and possibly violent predilections. It’s best to remain vague about what follows, as the consequences of Alexia’s actions leads her to desperate choices, and she winds up entangled in the life of firefighter Vincent (Vincent Lindon). But Ducournau uses her crazy premise to delve into a host of complicated topics: notions of masculinity; how and when the “avenging angel” trope goes too far; what it looks like when a parent truly loves a child unconditionally. And she manages to do so in ways that are often spiked with unlikely dollops of dark humor, in addition to the gloriously eerie images of Ruben Impens’ cinematography. At least another viewing might be required to really know if Ducournau nails her metaphors for sexual and gender fluidity, or whether she might be trying to cover too much thematic ground. It’s a lot clearer that this is a filmmaker with a lot of stuff on her mind, and some strangely thrilling ways of sharing it. Available Oct. 1 in theaters. (R)

Venom: Let There Be Carnage **1/2
Is the crazed “The Incredible Hulk by way of All of Me” energy of the Venom films a welcome change of pace from the cookie-cutter professionalism of the Marvel Cinematic Universe movies? Sure—but that’s not exactly the same thing as saying they’re “good” movies. Tom Hardy returns as Eddie Brock, the San Francisco reporter inhabited by an symbiotic alien consciousness, and who inadvertently creates a rival beast called Carnage when serial killer Cletus Kasady (Woody Harrelson) gets a taste of his infected blood. It’s hard not to recognize you’re in the presence of something unique once Hardy and Harrelson begin engaging in a performance twitch-off for the ages, the screen barely able to contain their twisted line readings. And that’s decent fun for a while, especially in a lean 90-minute narrative that treats extraneous exposition like … well, like an unwelcome alien symbiote. Eventually, though, it’s all going to come down to a massive showdown between our two monsters, and director Andy Serkis—experienced though the Gollum actor might be at understanding tormented split psyches—can’t wrestle anything interesting out of the crash-bang-boom in his action beats. As long as Let There Be Carnage focuses on Eddie/Venom as a bickering old couple, or an insecure Venom holding court at a rave, it's at least weirdly amusing in a way that yet another comic-book grand finale seems incapable of delivering. Available Oct. 1 in theaters. (PG-13)