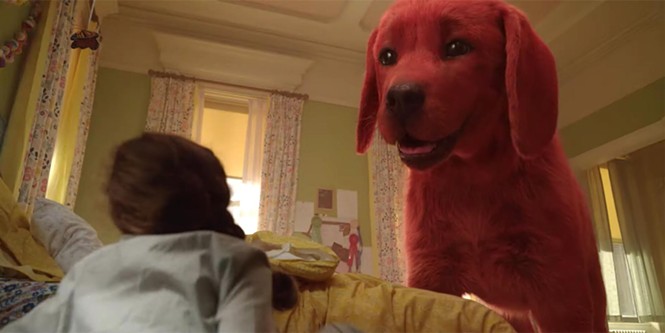 Clifford the Big Red Dog **1/2
It’s unfortunate when certain genres—like, say, live-action movie versions of kid-friendly characters—are so regularly awful that mere mediocrity almost feels like a relief. Yet, here we are. Norman Bridwell’s non-threateningly massive crimson canine here starts off as a puppy who finds his way into the home of lonely sixth-grader Emily Elizabeth (Darby Camp), but grows overnight to ten feet high, with all the accompanying difficulties for Emily Elizabeth and the irresponsible uncle (Jack Whitehall) who’s watching her while her mom is away. Those difficulties mostly revolve around a villainous biotech CEO (Tony Hale) who sees Clifford as a shortcut to a research breakthrough, so we get lots of rambunctious chases through Manhattan. And like a lot of kid fare, the thematic material mostly revolves around how hard it is to be different in any way, wrapped in a package that is as familiar and un-different as it could be. But the lighthearted shenanigans are pleasant enough most of the time, and Camp makes for an appealing protagonist, especially when teamed with a classmate (Izaac Wang) who has a thinly-veiled crush on her. Sure, there are pee and fart jokes involving the giant dog, but there’s also a charmingly low-key food fight, soooo … call it a draw? Available Nov. 10 in theaters. (PG)

Home Sweet Home Alone *1/2
On the one hand, it’s a gutsy subversion of the Home Alone formula to make the solitary kid the thief, and the home invaders the sympathetic protagonists; on the other hand, it’s also a pretty stupid subversion. As the holiday season approaches, married couple Pam (Ellie Kemper) and Jeff (Rob Delaney) face financial difficulties that might force them to sell their home, unless they can recover a valuable collectible doll they believe was stolen at an open house by 10-year-old Max (Archie Yates), who was subsequently left—wait for it—home alone by his harried mom (Aisling Bea). The expected slapstick shenanigans ensue in the script credited to Saturday Night Live’s Mikey Day and Streeter Seidell, and Kemper in particular is game enough at enduring various physical humiliations. But the entire premise feels particularly cruel if we’re supposed to be on the side of Pam and Jeff, while Max mostly seems like an annoying little shit. The expected callbacks to the original film appear, of course, from “Somewhere in My Memory” to a McCallister sibling all grown up, so one presumes that part of the intended audience is also old enough to remember Home Alone. The kids, meanwhile, won’t care about the questions of right and wrong, as they chuckle along to sad adults getting knocked around, or a man farting in his wife’s face while “O Holy Night” plays along. Available Nov. 12 via Disney+. (PG)

Love Is Love Is Love: Three Tales **
As indicated by the subtitle, co-writer/director Eleanor Coppola’s feature is a triptych, in which the third of the three tales is nearly twice as long as either of the other two—which is fortunate, because it’s the only one that’s not a complete waste of time. The lead-off piece, “Two for Dinner,” plods tediously through a Zoom date-night between an L.A.-based caterer (Joanne Whalley) and her on-location-in-Montana movie-producer husband (Chris Messina), leading to a too-obvious punch line with no actual resolution; the middle section, “Sailing Lesson,” deals with an older couple (Kathy Baker and Marshall Bell) trying to rekindle their relationship, while revealing almost nothing about either of the characters. There’s actually a surprising degree of emotion in the closer “Late Lunch,” where Caroline (Maya Kazan) gathers many friends of her recently-deceased mother, and their various stories flesh out a woman the grieving Caroline realizes she didn’t know well enough. Is the entire point of the two earlier stories merely to emphasize that female friendships are a more profound kind of love than those represented by married couples? If so, there has to be a better way of making that point than asking an audience sit through 40 minutes of excruciatingly dull exchanges. Available Nov. 12 in theaters. (NR)

Mayor Pete **1/2
Throughout Jesse Moss’s documentary about the 2019-2020 presidential campaign of then-South Bend, Ind. Mayor Pete Buttigieg, we see his advisors telling him that he needs to do a better job of connecting with people emotionally—and I’m not sure that’s a problem this movie solves. There’s a lot of good behind-the-scenes material here exploring how someone with no national political experience made as much of an impact as he did leading up to the Iowa caucuses; it’s fascinating watching his tart-tongued communications director, Lis Smith, hammer Buttigieg in debate prep on how his calm, perpetually unruffled demeanor could be turned against him. It’s clear that’s just who Buttigieg is, and that he wants to run a campaign based on being his authentic self, especially as someone who came out as gay relatively late in life. Yet as much as this documentary wants to put us on Mayor Pete’s side, he remains elusive as a person because there’s so little material here that doesn’t involve him being a politician. And when the focus does turn to his domestic world, we just see how much more charming his husband Chasten seems while Pete broods or types. As a post-mortem on a campaign with an unusually sharp trajectory from unknown to favorite to also-ran, I suppose it does the job of explaining why Buttigieg isn’t President right now. Available Nov. 12 via Amazon Prime. (R)