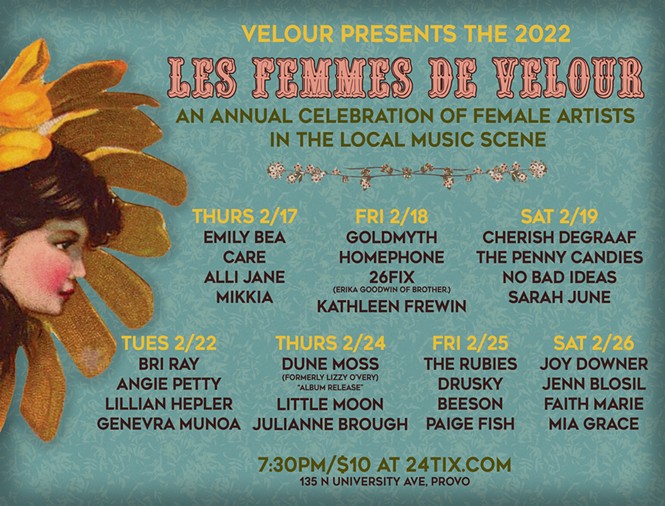 “Variations of Les Femmes go all the way back to Provo venues I worked at in the mid ’90s,” says Velour owner Corey Fox, “but it didn't become a consistent annual event until 12 years ago when we started ‘Les Femmes De Velour.’ It actually started as a one night show but over the years slowly grew from one-, two-, three-, and eventually a four- night event. In 2020 (A few weeks before COVID hit) we celebrated the 10-year anniversary of Les Femmes by expanding it to seven nights. After missing last year due to Covid we were excited to bring it back this year.”

Fox adds that “I'd originally planned on just bringing back the four-night event but thought ‘why?’ There are so many talented female artists in the scene that we decided to keep it to seven nights and 27 acts with an ultimate future goal of an entire month.”

The initial goal, he says, was “to celebrate these talented female artists, build camaraderie between each other, and ultimately to inspire other young females to get more involved and active in the local music scene.”

With five shows already in the books, the event concludes with a four-artist lineup both tonight and tomorrow. The Rubies, Drusky, Beeson and Paige Fish appear on Friday, Feb. 25. On Saturday, Feb. 26, the lineup includes Joy Downer, Jenn Blosil, Faith Marie and Mia Grace.

Asked to call out some faves, Fox notes a couple with recent buzz. “As far as specific acts that I'm excited for on this final weekend,” Fox says, “that's a very hard question, because they are both all-star lineups. It's hard not to be excited about both headliners, though. Friday night's headliner is the all-female pop-rock band The Rubies. They currently have a great buzz, and recently opened for both Neon Trees and The Aces. Saturday's is the amazing Joy Downer. Joy is a former Utah native, now in L.A. She made her network television debut on The Late Late Show with James Corden last year, which featured Beck playing bass with her.”