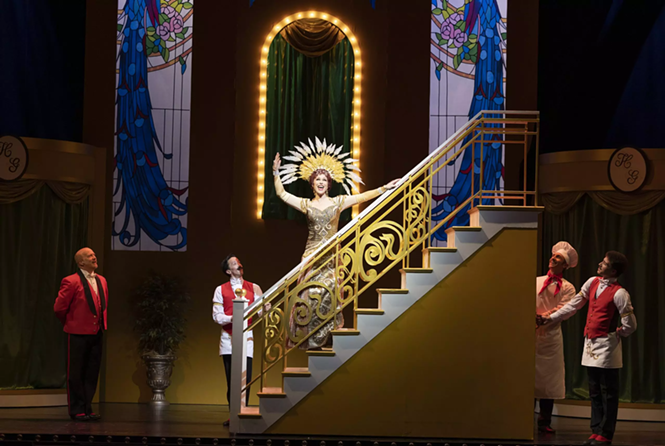 It’s not a particularly hot take that some classic musicals work almost entirely as delivery systems for their songs. Narratives might not age particularly well with the passing of years, but great tunes stand the test of time—and can make a show worth enjoying all on their own.

Hello, Dolly!—the 1964 musical adapted from Thornton Wilder’s The Merchant of Yonkers—has embedded itself in the popular culture by means of the well-known title song and its inclusion in the Pixar film WALL-E as the robot protagonist’s idealized vision of human romance. It can also, at times, feel like a particularly awkward piece of farce with its turn-of-the-20th-century-by-way-of-the-early-1960s gender politics. Yet as Pioneer Theatre Company’s current production demonstrates, if you give it enough panache, and a bunch of terrific Jerry Herman songs, such things are exceedingly easy to forgive.

The central plot involves the machinations of professional matchmaker Dolly Levi (Paige Davis) in early 1900s New York, as one of her customers, successful Yonkers “half-a-millionaire” Horace Vandergelder (Kris Coleman), is targeted by the widowed Dolly as her own potential second husband. Meanwhile, two of Vandergelder’s clerks—Cornelius (Alexander Mendoza) and Barnaby (Michael J. Rios)—sneak out from their work trying to find their own romantic partners while exploring Manhattan.

Plenty of Hello, Dolly! is predicated on the notion that partnerless people are inevitably dissatisfied, so it’s wise to begin from whether or not that’s particularly problematic for a potential viewer. The book by Michael Stewart needs to make Dolly herself both a manipulative force of nature and a sympathetic heroine, and the asides in which she asks for the intercession of her deceased husband to assure her happiness are never entirely successful when the primary thing she seems to find appealing about the surly Vandergelder is his wallet. In general, the characters range from broad types to not-particularly-broad types, leaving the performances to make up in sheer energy for what they lack in depth.

Which, in this case, they absolutely do. Davis has exactly the big, radiant smile to make Dolly charming rather than conniving, and to sell sassy numbers like “I Put My Hand In.” The supporting cast is just as game, with standout work coming from Dori Waymer as Minnie and Rios’ Barnaby. Director Karen Azenberg also oversees the sensational choreography, most memorably in the split-second timing required for “The Waiters’ Gallop” but always providing a burst of high-spirited fun when needed.

Mostly, there are the Herman tunes, with scarcely a bit of filler in the bunch that includes “Before the Parade Passes By,” “Put On Your Sunday Clothes,” “Elegance” and, of course, “Hello, Dolly.” It’s silly not to pretend they’re a lot of the reason that people come out to shows they might know better from hearing the songs than from experiencing the story, and that such musicals can deliver ear-to-ear smiles simply by giving talented performers the chance to offer those classics live and in person. Whatever parts of Hello, Dolly! might seem clunky to a modern ear, they’re not the parts when the music is playing, and you’re thinking that it’s so nice to have yourself back where you belong.