The Black Phone, Elvis, Beavis and Butt-head Do the Universe and more 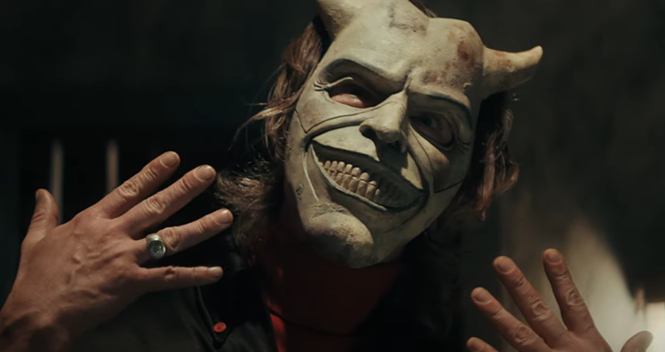 Beavis and Butt-head Do the Universe ***
It’s been 25 years since Mike Judge’s sniggering animated adolescents last graced a screen—and God bless ’em, they’re just as stupid, immature, horny and funny as they’ve ever been. Judge returns as co-writer and voice to both of our dimwitted anti-heroes, in a story that begins in 1998 with B & B sentenced to attend space camp after a destructive episode at their high-school science fair, continues with a trip on board the space shuttle, and turns into a time travel yarn as the lads wind up in 2022 and potentially responsible for the fate of the multiverse and the re-election hopes of the governor of Texas (Andrea Savage). Sending Beavis and Butt-head into the future doesn’t yield as many solid fish-out-of-water gags as one might hope for, though it’s a gas that they seem incapable of harnessing the immense power of smartphones for anything more creative than ordering nachos. Their appeal remains in the same single-minded idiocy that has always been fundamental to the characters—most specifically their inability to avoid giggling at any word or syllable that sounds remotely sexual or scatological, so visiting “Johnson” Space Center is hilarity waiting to happen. Judge and company deliver plenty of satisfying humor without changing Beavis and Butt-head at all for a new century. Cornholio still needs TP for his bunghole, and I am most decidedly here for it. Available June 23 via Paramount+. (PG-13)

The Black Phone ***1/2
Many of Stephen King’s most iconic works have been built on how terrifying childhood and adolescence can be; this adaptation of a story by King’s son Joe Hill, from director Scott Derrickson and co-writer C. Robert Cargill, does a terrific job of mining similar territory. In 1978 Denver, middle-schooler Finney Blake (Mason Thames) becomes the latest abductee taken by a serial kidnapper known as “The Grabber” (Ethan Hawke). In the basement room where he’s held captive, Finney starts getting calls on a disconnected phone from The Grabber’s previous victims. It’s hard to get around the fact that the supernatural elements—including the psychic dreams of Finney’s younger sister, Gwen (Madeleine McGraw)—create plenty of deus ex telephonica escape routes from narrative dead ends, and enough waiting-to-be-fired metaphorical Chekhovian guns to start a militia. But Derrickson has a unique touch as a horror director, emphasizing genuine menace, creepy imagery like The Grabber’s mask and solid performances all around, particularly from the impressive young Thames and McGraw. The period-piece setting allows for a few solid gags (including a funny smash cut to a particular TV show title of the era), but for a change it’s not just about creating a setting without smartphones. It’s a reminder that the good old days were still filled with terrors, especially for a kid like Finney perpetually dealing with bullies both at school and at home in the form of his alcoholic father (Jeremy Davies, Jeremy Davies-ing up the joint as only Jeremy Davies can). Rather than just being a scare-fest, this is a truly satisfying coming-of-age yarn, because it recognizes that coming of age alone can scare the hell out of you. Available June 24 in theaters. (R)

The Phantom of the Open **1/2
Rise **1/2
Underdog sports biopics practically dare you to be churlish enough to resist their uplifting messages of persistence against the odds—so here I am, taking the dare. Phantom of the Open draws its narrative from the story of Maurice Flitcroft (Mark Rylance), a middle-aged shipyard worker in the North of England who impulsively takes up golf in 1975 with a determination to enter the British Open. Much of the film focuses on Maurice’s family—including his supportive wife (Sally Hawkins), and his increasingly-embarrassed stepson (Jake Davies)—and the tension between Maurice’s determined optimism and the financial and societal obstacles in his path. But while Rylance is always impressive, even behind a massive set of dentures here, director Craig Roberts’ fanciful approach to the material never suggests that there are any real consequences to Maurice’s failure; it’s cute, while feeling utterly weightless. There’s certainly more sense of consequence in Rise, the true story behind future NBA all-star Giannis Antetokounmpo (Uche Agada), his brother Thanassis (Ral Agada) and their family, following their parents (Dayo Okeniyi and Yetide Badaki) from Kenya to life as undocumented immigrants in Greece. The stakes are always clear, with potential homelessness and/or deportation always lurking just around the corner, and winning performances by the young unknown actors. It’s also the kind of screenplay stocked with melodramatic villains, and so afraid that any viewer might not know what’s happening that it never stops reminding you exactly what NBA draft position Giannis has to be taken in to fend off disaster. Your mileage may vary, but an uplift is only one part of what makes a movie work. The Phantom of the Open available June 24 in theaters (PG-13); Rise available June 24 via Disney+. (PG)

Trevor: The Musical **
The “filmed stage musical” trend invites a lot of questions about whether you’re evaluating the stage production the movie is chronicling, or the way that stage production is captured as cinema, or some weird combination of both. Adapted from the 1994 Oscar-winning short film that also inspired the non-profit Trevor Project, this off-Broadway show tells the circa-1981 story of Trevor Nelson (Holden William Hagelberger), a 13-year-old middle-schooler with an affection for Diana Ross, musical theater and—much more complicating for an adolescent’s life—one of his male classmates (Sammy Dell). There’s no denying the earnestness of the story’s message about the psychological and peer pressures on gay kids, or the heartfelt performance Hagelberger delivers. But the songs Dan Collins and Julianne Wick Davis rarely rise above the level of merely serviceable, perhaps because so many of them were written for the voices of young singers who are considerably more enthusiastic than they are as-yet-trained. As for the version we see on the screen, director Robin Mishkin Abrams appears far more concerned with coverage than with recognizing that some emotional moments actually lose their punch when you show them from five different angles. You can be 100 percent on board with the “it gets better” message and still think that, at best, you had to be there. Available June 24 via Disney+. (NR)