It’s not necessarily an obvious life journey to go from a master’s degree in animal behavior to a journalism career to becoming one of the world’s best-known dinosaur experts. But according to Don Lessem, figuring out life on the fly is something he’s good at.

“That’s a theme for me,” Lessem says: “Don’t know what you’re doing, but do it anyway.”

By now, “Dino Don” certainly knows what he’s doing when it comes to dinosaurs. Lessem has been a consultant for the original Jurassic Park and Disney’s animated Dinosaur feature, and founded a company, Dino Don, Inc., that manufactures life-size robotic dinosaurs for traveling exhibitions. One such exhibition is currently on display at Thanksgiving Point’s Ashton Gardens; Lessem visited the site on Friday, July 1 for a morning conversation with guests, and to talk about Jurassic Park after an outdoor screening of the film tonight at 8 p.m.

Lessem’s dino journey began in 1988, when he was a Knight Journalism Fellow writing mostly about scientific subjects. But taking that interest into the field of robotics came about four years ago, during a visit to a dig site in China, where a guide asked if he wanted to see a “dinosaur factory.” “I saw that they weren’t from a mold,” Lessem recalls. “They were little old ladies … carving to a design that someone gave them that was terrible. I realized, if I got a paleontologist, and got these guys to act under their supervision, we could make full-size dinosaurs a lot more consonant with what we know from the research. Then we had a niche to start selling them, because we were the only ones.”

The Thanksgiving Point exhibit includes around 30 dinosaurs, and is one of 15 such shows of various sizes that tour through six countries. Placed throughout the Ashton Gardens, they are sometimes grouped in ways that Lessem believes “tells a story,” whether about the fact that they lived in family groups, or what creatures actually existed during the same geologic era. 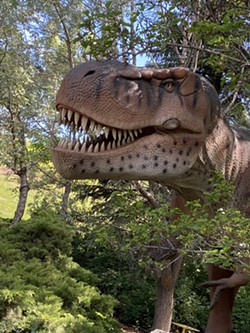 And they do attempt to represent the most up-to-date research, including the feathers on some dinos, or the recorded sounds that accompany them, which are all digitally-altered forms of contemporary bird noises. But there are, Lessem acknowledges, occasions when the realities of engineering need to supersede the facts of a particular species, like the deinonychus robots that are considerably larger than their real-life counterparts because of the size of the motors required to operate them. “They might actually be poodle-sized,” Lessem says, “but then we couldn’t make them move.”

These big guys do move, though—not just flapping their jaws and moving their necks, but even “breathing.” Bringing them as close to life as possible, in an environment where families can experience them, is part of what Lessem loves about his job, as is obvious when he starts chatting with a youngster digging through a sand pit looking for “fossils.”

“I was a late convert to robotics,” Lessem says. “But kids love ’em.”