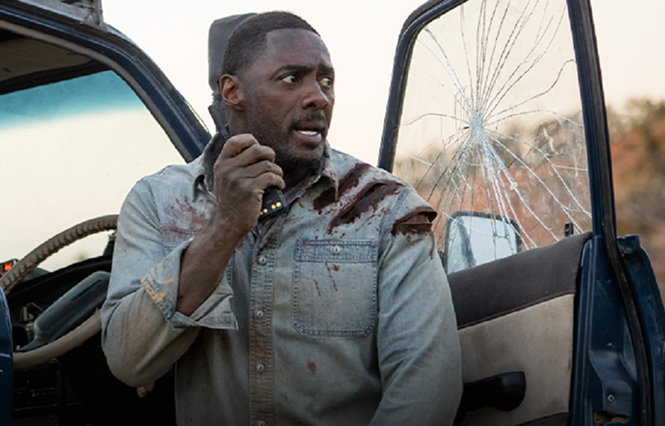 Beast **
Look, I’m all for giving emotional subtext to a stalked-by-a-giant-lion movie, but at a certain point, you need to deliver more on being a stalked-by-a-giant-lion movie. Idris Elba plays Nate Samuels, an American doctor who takes his two teenage daughters (Iyana Halley and Leah Jeffries) to visit an old friend (Sharlto Copley) on a South African nature preserve, shortly after the passing of the girls’ mother. Unfortunately, his timing is a bit off, as it coincides with a rogue lion indiscriminately attacking every human in sight. There’s a little bit of Jaws and a little bit of Cujo in Beast’s DNA, as director Baltasar Kormákur tries to optimize the tension with characters trapped in a vehicle. But while there are a couple of solid sequences built around “where’s the monster” uncertainty, this is ultimately a 93-minute movie that spends way too much time on Nate angsting over his failings as a husband and father, and the girls muttering recriminations, all while the script sets up at lest one Chekhovian gun that it never subsequently fires. The obvious analogy of both Nate and the lion as grieving fathers is somehow both underexplored and dumb that it exists at all, and Elba’s intense confidence as an actor seems misplaced in a character who should be defined by being out of his element. And at the risk of spoiling things, it’s clear that screenwriter Ryan Engle didn’t really know how to make for a satisfying resolution to a story where we’re also supposed to be at least sort of sympathetic towards the marauding animal. Available Aug. 19 in theaters. (R)

Look Both Ways **
It is not the fault of anybody involved in the making of Look Both Ways that it inevitably lands different in the post-overturn-of-Roe v. Wade world than might have been considered when it was made, but here we are. It’s an alternate-realities tale pivoting on the pregnancy test taken by Natalie Bennett (Lili Reinhart) on the night of her college graduation, with one path taking her toward her long-planned career as an animator, and the other taking her towards motherhood. It's a little sketchy right off the bat that the Natalie who gets a positive test pivots so immediately from “I’ve got a five-year plan” to “que será, será” without once considering an abortion, but it’s not inherently a problem that this isn’t that movie. But as we follow Natalie down her two multi-year paths—with editing choices that aren’t always the easiest to follow—it becomes clear that the narrative upshot is that life always throws you curveballs, but it can still all work out for the best if you just buckle down and figure things out. Which is all well and good if you’re a college-educated white girl from a clearly-well-off family, and now feels fairly tone-deaf about the life-changing impact of an unplanned pregnancy. Reinhart is a winning presence at the center, but the speed bumps in Natalie’s life barely register as consequential. “Everything will turn out fine” might seem like an uplifting message, but in this case, it comes off as kind of cruel. Available Aug. 17 via Netflix. (TV-14)

My Old School ***
There’s an entire-subgenre of documentaries focused on uncovered secrets about people who may be misrepresenting themselves—The Impostor, Misha and the Wolves, etc.—and this one continues to show that it’s a rich source for interesting cinema. Director Jono McLeod explores a story set in early 1990s Glasgow, where new student Brandon Lee arrives as a “fifth-year” (read: high school junior) at posh Bearsden Academy—only for it to be revealed ultimately that he’s not who he claims to be. The nature of “Brandon’s” true story unfolds slowly over 100 minutes, with several of his classmates sharing contemporary reflections from a 30-year remove, and actor Alan Cumming lip-syncing an audio interview with Brandon (who chose not to appear on camera). That decision has a thematic purpose beyond Brandon’s own reasons for choosing voice-only participation, and the revelations are strange enough that I’ll avoid specifics for those who don’t already know the story. McLeod doesn’t depend entirely on those revelations, however, thanks to the entertaining commentary provided by the now-adult classmates. Their perspectives are shaped by their status within the high-school hierarchy when they were teens, and their perspective on it now, adding another layer of fascination to a tale about what those formative years can look like when you’re old enough to know better. Available Aug. 19 at Broadway Centre Cinemas. (NR)

Spin Me Round ***
If there’s one consistent thread through the work of writer/director Jeff Baena—at his best and at his worst—it’s that shit is gonna get weird at some point. Baena wrote once again with his Horse Girl collaborator Alison Brie, who plays Amber, manager of a Bakersfield, Calif. restaurant in an Olive Garden-esque chain. Her boring life gets a boost when she’s invited to Italy for a corporate retreat with several other managers—and ends up catching the eye of the company’s CEO (Alessandro Nivola). If you know Baena’s work at all, you can guess that this won’t be some Under the Tuscan Sun tale of personal romantic awakening, not with a supporting cast of oddballs like Molly Shannon, Tim Heidecker, Gabe Woods, Fred Armisen and Baena’s partner Aubrey Plaza. The weird shenanigans take over for any notion that this is a character study of Amber breaking out of her shell, allowing Brie to have fun as the sane center around which everything else rotates. And it’s most enjoyable when the third act goes completely nuts with Amber trying to figure out if the program has some dark ulterior motive. There’s always unevenness to Baena joints, but I’ll happily roll with the comedy of someone trying to drive off angrily in a mini-van, only to discover that a not-particularly-tight turning radius dampens the effect somewhat. Available Aug. 19 in theaters, on VOD and via AMC+. (R)