Gigi & Nate, The Good Boss, Honk for Jesus. Save Your Soul. and more 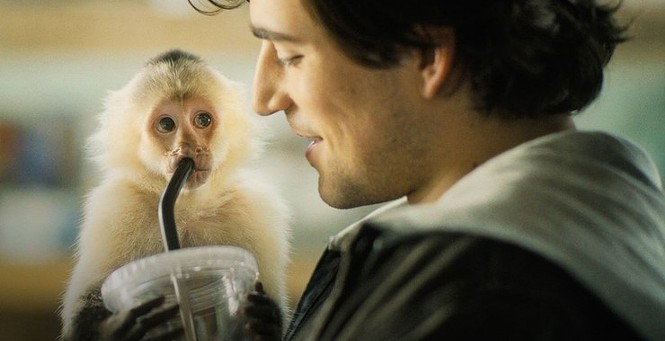 Burial **1/2
Genre films dig into genuinely meaty content all the time, and writer/director Ben Parker has a solid concept here that he just doesn’t deliver on. Opening in 1991 London with a break-in at the home of an elderly woman (Harriet Walter), the narrative then flashes back to 1945 Berlin, where Russian soldier Brana (Charlotte Vega) is part of a group attempting to deliver a very important package—the corpse of Adolph Hitler—to Stalin in the waning days of World War II. But their mission is complicated by German “werewolves” (guerrilla fighters) hiding out in the woods of Poland and hoping to retrieve that same package. Parker introduces a weird, pseudo-supernatural component in hallucinogenic smoke bombs, which contributes to a sense that the plot isn’t particularly focused. There is, however, a terrific allegorical conceit at the center of it all: the idea that ideological zealots are looking for any excuse at all to believe lies that still give them a sense of purpose. It’s effectively developed, up to and including the notion that people are prepared to self-destruct for those ideas, and it all might have gone down better had not the climactic action sequences been so incomprehensibly edited, and the characterizations of the protagonists more clearly defined. What remains is a moderately effective war drama too haphazard for its bigger ambitions to land with the desired impact. Available Sept. 2 in theaters and via VOD. (R)

Gigi & Nate **
It’s a frustrating thing when a drama clearly conceived as “feel-good” instead leaves you mostly feeling confused. Nate Gibson (Charlie Rowe) is an active 18-year-old who’s left a paraplegic after a bout with meningitis; four years later, Nate is ready to give in to despair when he’s offered the chance to get a service animal, a rescued capuchin monkey named Gigi. Naturally, there is plenty of adorable simian hijinks (whenever it’s a real Gigi and not CGIgi), and there are some effective human moments conveying the emotional weight felt by caregiver family members, particularly in a sweet scene between Nate and his older sister (Josephine Langford). But in general, the script by David Hudgins is kind of a mess, introducing subplots like the marital tension between Nate’s parents (Marcia Gay Harden and Jim Belushi) that never get fully resolved. And then the narrative abruptly turns into a courtroom battle involving cartoonishly zealous animal-rights activists trying to make service capuchins illegal, giving Nate the chance for a big speech without actually addressing whether this should be an ethical question. Ultimately, it’s less a “triumph of the spirit” tale than it is a collection of ideas that rarely cohere into a complete movie. Available Sept. 2 in theaters. (PG-13)

Honk for Jesus. Save Your Soul. **1/2
See feature review. Available Sept. 2 in theaters and via Peacock. (R)

McEnroe ***
John McEnroe isn’t exactly a fresh subject for film treatment, in either fiction or documentary form, but director Barney Douglas gets enough fresh insight from his access to the man himself to make up for some clunky filmmaking choices. It’s a fairly comprehensive look at the tennis legend’s life from his youth to the present, with a particular emphasis on McEnroe’s relationship with his father, and how that might have shaped the volatile perfectionist who became as famous for his on-court meltdowns as for his excellence. While Douglas does get perspective from others—including McEnroe’s kids; his wife, musician Patty Smyth; and his rival/friend Bjorn Borg—he mostly allows the now-63-year-old McEnroe to tell his own story, with honest insights into stuff like how the rock-star tennis legends of the 1970s made the sport seem more appealing to him, and his professional and personal failings over the years. A lot of those words are accompanied by images of McEnroe walking alone—through the streets of New York, or down an empty desert road—and it’s more than slightly over-dramatized, particularly a weird choice to have one audio snippet from his father delivered over a pay phone that McEnroe picks up. There’s more than enough compelling perspective on this controversial sports legend without needing to turn it into an angsty music video. Available Sept. 2 via Showtime on Demand; Sept. 4 Showtime on-air. (NR)