Catherine Called Birdy, Don't Worry Darling, Sidney, On the Come Up and more 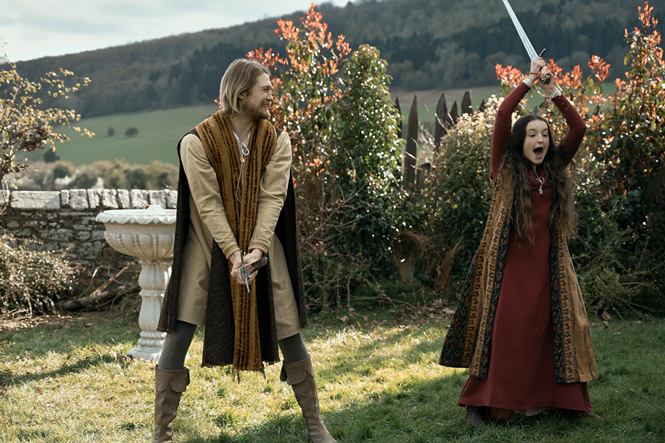 Catherine Called Birdy ***
Whatever your thoughts about the oeuvre of Lena Dunham, it’s likely you wouldn’t be expecting her at the helm of a frisky period-piece romp like this adaptation of Karen Cushman’s novel. In 13th century England, 14-year-old Catherine (Bella Ramsey)—daughter of feudal Lord Rollo (Andrew Scott)—lives a mischievous life terribly unbecoming of a lady. And that mischievousness gets a particular workout when her financially-strapped father decides one of his few remaining options for income is marrying Catherine off. The narrative darts off in plenty of odd directions, including Catherine’s crush on her own uncle (Joe Alwyn), and at times comes perilously close to overplaying its anachronistic gender-equality message, underscored by several cover versions of female-fronted pop tunes. Everything comes down to the appeal of young Ramsey, and fortunately she’s delightful, with Dunham guiding her to the sweet spot between incorrigible and irritating as she learns her important life lessons like a Jane Austen heroine. It’s inconsequential but thoroughly engaging—and as a bonus, you get Catherine’s Catholic monk older brother scolding her for brandishing a crucifix like a sword with a resigned “do not joust with our crucified Savior.” Available Sept. 23 in theaters; Oct. 7 via Amazon Prime Video. (PG-13)

Lou **
Call me old-fashioned, but when the premise of a movie promises me “Allison Janney gets to be a total badass,” I want a movie that delivers “Allison Janney gets to be a total badass” in more than dribs and drabs. Janney plays Lou, a solitary woman living in the San Juan Islands of Washington state circa 1986, and a woman who clearly has a history—a history that comes into play when her tenant Hannah (Jurnee Smollett) needs help after her young daughter (Ridley Asha Bateman) is kidnapped by Hannah’s estranged ex-Green Beret husband (Logan Marshall-Green). The action gets rolling during a torrential storm, which suggests a conflict scenario that’s as much about nature as about personal grudges. That storm stops long before the movie does, though, which is a microcosm for what doesn’t work about Maggie Cohn and Jack Stanley’s script: It’s all set-up that fizzles out just when it should be starting to roar. Janney is solid enough at conveying the hard edges in Lou’s past, but after one big face-off with a couple of mercenaries, we end up getting a lot more talking that we do rocking. The theoretically emotion-packed back-stories for these characters just isn’t interesting enough to keep it rolling between set pieces—and that “between” feels like just won’t ever stop. Available Sept. 23 via Netflix. (R)

On the Come Up ***
Novelist Angie Thomas (The Hate U Give) has carved out a welcome, unique place telling young-adult personal-empowerment stories framed by the violent day-to-day realities facing so many teens of color. This adaptation of Thomas’s follow-up tells the story of 16-year-old Bri (Jamila Gray), daughter of a late rap icon and a recovering heroin-addict mom (Sanaa Lathan) trying to establish her own career as an MC, and forced to decide how true to stay to her principles when principles don’t pay the rent or keep the lights on. Bri’s moral test takes the form of deciding whether her manager should be her gang-banger aunt (Da’Vine Joy Randolph, an absolute powerhouse) or the established pro (Method Man) who repped her dad, and it’s predictably built on loyalty to family vs. worldly temptations. But Lathan, making her feature-directing debut, makes some great intuitive choices about how to tell her story visually, including a montage of still images of Bri and her friends on their all-expenses-paid trip, just like the Instagram posts kids of this age would inevitably share. While the narrative deals awkwardly with material like the politics at Bri’s majority-white high school—and a Karen-ful meeting built entirely for an applause break—it works as a kind of underdog-sports drama complete with battles in a boxing ring. Gray’s performance prides a steady center, delivering a rapper who’s also a Star Wars nerd, deciding what it really means to “keep it real.” Available Sept. 23 in theaters and via Paramount+. (PG-13)

Railway Children ***
You wouldn’t know from the way this family feature is being promoted in the U.S. that its original source material dates back more than a century, or that Jenny Agutter is reprising a role she first played more than 50 years ago. That knowledge isn’t particularly crucial for this sort-of-sequel set in 1944 England, where a trio of siblings—Lily (Beau Gadsdon), Pattie (Eden Hamilton) and Ted (Zac Cudby)—are among the many children relocated by their parents from cities to the countryside to protect them from German bombing. There, they stay with Bobbie (Agutter), her daughter Annie (Sheridan Smith) and Annie’s son Thomas (Austin Haynes), and soon find themselves helping wounded Black American soldier Abe (Kenneth Aikens). Director Morgan Rogers and the screenwriting team keep the wartime tale at a gentle, age-appropriate level, with an appealing group of young actors anchoring the adventures well. And while it feels slightly anachronistic to suggest that 1940s English folk would be thinking of World War II as a battle against a foe who “hates people who are different,” it’s still an effective angle to find these kids—during a time theoretically about national unity—confronting realities of bigotry directed at themselves as outsiders, and at their new Black friend. In a lot of ways, it feels like the kind of all-ages film more reminiscent of its predecessor’s era: thoughtful, humane, and not particularly interested in frantic action. Available Sept. 23 in theaters. (PG)

Sidney ***
Director Reginald Hudlin’s documentary profile of Sidney Poitier does nothing earth-shaking in exploring the life of the pioneering actor/director/activist, but this is one of those documentary subjects that can withstand more than a little hero-worship. Employing interviews with Poitier himself prior to his death earlier this year along with plenty of archival material, the film traces his journey from an electricity- and running-water-free farming community in the Bahamas circa 1927, to teenage immigrant in Jim Crow 1940s Florida, to aspiring performer in New York before becoming the first bona fide Black movie star. Hudlin hits all the expected personal and career bullet points—his ground-breaking Oscar win for Lilies of the Field; the “slap heard round the world” in In the Heat of the Night; the tricky position of being a “safe” Black actor for white America to accept as the Civil Rights era percolated; his improbable cinematic second act as a director of hit comedies—and is willing to take Poitier off the pedestal to acknowledge his long affair with Diahann Carroll. But this is mostly a celebration of a man of integrity, with some interesting tidbits about Poitier’s principles-inspired career choices and glowing words from folks like Oprah Winfrey, Denzel Washington and Spike Lee. Sure, it’s hagiography rather than probing journalism—and it feels fair to say that Sidney Poitier has earned that kind of treatment. Available Sept. 23 via AppleTV+. (NR)