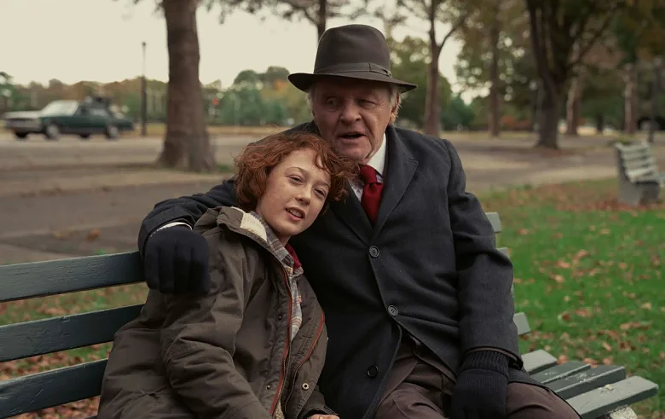 Armageddon Time **1/2
Over the course of nearly 30 years as a filmmaker, one of James Gray’s undeniable gifts has been creating a rich sense of place for his stories; they’re scometimes less compelling when he gets too explicit about the thematic subtext he inserts into those places. This coming-of-age tale set in pre-Reagan 1980 Queens, New York follows sixth-grader Paul Graff (Banks Repeta) as he begins learning hard truths about the world, particularly when he befriends Black classmate Johnny (Jaylin Webb). Gray builds a lot of the backstory around Paul’s Jewish family—his mother (Anne Hathaway), hot-tempered father (Jeremy Strong) and beloved grandfather (Anthony Hopkins)—and their aspirations for Paul and his brother, along with the challenge of one American minority recognizing kindred souls in the plight of a different American minority. As effectively as Gray crafts the individual episodic experiences of Paul and Johnny, however, it’s hard to avoid the reality that this semi-autobiographical story relegates Johnny to the role of catalyst for Paul’s experiences, rather than a rich character in his own right. And it really feels like gilding the lily, even if it happened, to have Paul meeting one Fred Trump at his new private school, and getting a lecture from Maryanne Trump (Jessica Chastain) on bootstraps ideology. Gray is too good at human drama for the character moments to fall completely flat—so good, in fact, that the clunky socio-political messages feel all the more disappointing. Available Nov. 4 in theaters. (R)

Causeway ***1/2
There’s something almost revolutionary-feeling about movies with simple ambitions—telling human stories about dealing with the aftermath of a life-changing event, rather than with the event itself. That’s the struggle facing Army engineer Lynsey (Jennifer Lawrence), who returns to her New Orleans home from Afghanistan to rehabilitate after a traumatic brain injury; there she meets auto mechanic James (Brian Tyree Henry), who has his own not-always-visible physical and emotional wounds. While the narrative hints at the family troubles that inspired Lynsey to get as far away as possible, the focus is on the relationship between Lynsey and James, and it’s a knockout showcase for two gifted actors. Henry in particular is phenomenal, capturing the psychology of a lonely, haunted man in a way that’s deeply internalized. First-time feature director Lila Neugebauer keeps things visually understated, but allows the few moments that aren’t performance-focused—like a simple montage of swimming pools—to make a tremendous impression. It’s almost a disappointment on the rare occasions when bits of history become expository dialogue, because Causeway proves so effective at building character through observation, like the way James gets quiet after a reference to his sister, or Lynsey’s mother (Linda Emond) showing her worry for Lynsey’s late return home not in words, but by having two phones nearby when Lynsey finally walks in the door. Available Nov. 4 via AppleTV+. (R)

Enola Holmes 2 **1/2
Part of what makes the adaptations of Nancy Springer’s book series interesting is that there’s a spikiness to what might otherwise be innocuous girl-power narratives; characters here aren’t just about tearing down the established order with bon mots. So there’s an odd tension at play when the rambunctious energy stops in its tracks for people to deliver sermons. Most of the creative team returns from the 2020 original for the latest adventure of Enola Holmes (Millie Bobby Brown)—teenage sister of Sherlock (Henry Cavill)—whose latest case involves the disappearance of matchstick maker Sarah Chapman, and possible corruption including the local police inspector (David Thewlis). Director Harry Bradbeer continues the series’ mix of fourth-wall-breaking, animated interludes, low-key romance between Enola and Lord Tewkesbury (Louis Partridge) and fast-paced action, anchored by Brown’s appealilng lead performance. And there’s still an unapologetic radicalism, including Enola’s anarcho-feminist mom (Helena Bonham Carter) and basing the story on real-life labor agitator Sarah Chapman. Things do get a little busy, however, especially giving Sherlock nearly as much face time as Enola, which undercuts her later assertion that she shouldn’t be in the famous detective’s shadow. Then there’s the drawn-out ending, which spends 20 minutes on villain monologues and Norma Rae speeches, hammering at the edgy themes a bit too forcefully. Enola seems to work best when the balance between literal and philosophical fights is more even. Available Nov. 4 via Netflix. (PG-13)

Good Night Oppy ***
Veteran documentary director Ryan White (Ask Dr. Ruth) is fairly unapologetic about turning his story of the Mars rover project that included robot explorers Spirit and Opportunity into something that anthropomorphizes the mechanized subjects—but identifying that emotional connection with the robots is kind of the whole point. Employing archival footage and contemporary interviews, White profiles many of the key scientific team members like Jennifer Trosper, Rob Manning and Steve Squyres, spanning the early days creating a mission to investigate the possibility of liquid water having once been on Mars, through the realization that the planned 90-day lifespan of the twin robots might actually extend much longer with some creative problem-solving. There’s also a fair amount of material created by Industrial Light & Magic to re-create the rovers’ experiences on the red planet, which proves effective even if it feels a little bit like cheating. But that CGI stuff also helps turn Spirit and Opportunity into characters rather than machines, which is absolutely what the scientists themselves do, in ways ranging from referring to them as “she” rather than it, to describing their failing abilities in human terms like “arthritis.” Perhaps more significantly, Good Night Oppy acknowledges that such connections helped inspire another generation of scientists who later worked on the project. Good Night Oppy gets both practical and sentimental about how advancements in human knowledge often require feeling the task at hand, not simply thinking it. Available Nov. 4 in theaters; Nov. 23 via Prime Video. (PG)

The Return of Tanya Tucker: Featuring Brandi Carlile **1/2
The somewhat cumbersome official title of Kathlyn Horan’s documentary emphasizes the significance of two different people in this narrative, and perhaps also the unexpected things that can happen when people get up close and personal with their idols. It’s a little bit of a bummer, then, how much time Horan spends on backstory, rather than on what’s happening in the present between these two artists. The bulk of the action takes place during 2019, as Carlile and Shooter Jennings begin work with country music legend Tanya Tucker on what would become While I’m Livin’, Tucker’s first album of new music in 17 years. It’s clear from the outset that Carlile reveres Tucker as one of her key musical influences, and the film is at its best while observing the recording sessions in progress, with Carlile repeatedly having to pump up the anxious and self-doubting Tucker. But there’s also the matter of what led Tucker to this point—including tabloid-fodder behavior in her youthful stardom and substance-abuse issues—which certainly has a bearing on the 60-year-old Tucker of 2019, but feels like it’s presented in a pure information dump of archival interviews. As relevant as it may be to this narrative to understand what this “comeback” is coming back from, there’s so much more to the idea of Tucker waking up, through the encouragement of one talented super-fan, to the possibility that her creative voice still matters. Available Nov. 4 in theaters. (R)

Weird: The Al Yankovic Story **1/2
If Weird had emerged into a world where Walk Hard: The Dewey Cox Story hadn’t already happened, it would be a groundbreaking deconstruction of musician biopic clichés; in a post-Walk Hard world, it’s only moderately amusing. Expanding a Funny or Die short by writer/director Eric Appel, it creates a generally fictionalized “biography” of celebrated song parodist “Weird Al” Yankovic (Daniel Radcliffe), from his childhood with parents (Julianne Nicholson and Toby Huss) who only want him to “stop being the person you are and doing the things you love,” to his discovery by syndicated novelty-song enthusiast Dr. Demento (Rainn Wilson), to a tumultuous affair with … um, Madonna? (Evan Rachel Wood). Appel fills out the supporting cast with plenty of oddball cameos—Jack Black as Wolfman Jack, Josh Groban as a waiter, Yankovic himself paired with Will Forte as the music-industry Scotti Brothers—to the point of potential distraction, a bit like the only quibble with Walk Hard. And while it’s a perfect creative choice to turn Yankovic's life story into a parody, the movie pokes at tropes like contentious paternal relationships, tempestuous love affairs and battles with substance abuse in a way that can’t be quite as revelatory. Fortunately, Radcliffe is wonderfully game in his stringy perm and mustache, Wood perhaps even better in her dragon-lady incarnation of the Material Girl, and a few original bits—wasn’t quite prepared for the “hay boy”—offer some big laughs. It’s just a little bit of a bummer that this ends up feeling less like a “Weird Al” sendup of an original song than someone doing a cover version of a “Weird Al” sendup of an original song. Available Nov. 4 via Roku. (NR)