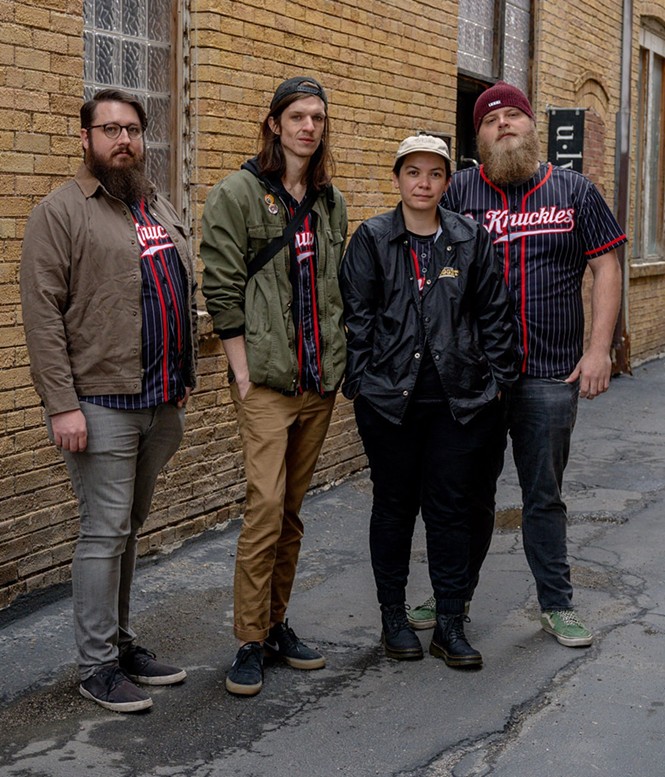 Another week, another blog of awesome music news from the local scene. This week includes everything from new albums, to music videos, to glorious sing-a-longs. If you have any fun music events you want to highlight, please email me at eatkinson@cityweekly.net!

&Knuckles: debut album Songs to Stop Folding Your Arms To
Sonic-inspired pop punk outfit &Knuckles released their debut album at the end of October. Fans of the pop punk genre will have fun with this one, as &Knuckles have a fun and exciting sound that exemplify the genre. Plus, any fans of the Sonic video game franchise will be happy to see tracks like “Lost Levels” and “Green Hill Zone.” Stream the album now or buy on the group’s Bandcamp.

Tomper: music video for debut single “Cruise Control” out now
“‘Cruise Control’ is a song about including the ones you love in the things you love to do,” according to Tomper’s Bandcamp profile. Cozy and cool, this video for Tomper’s debut single highlights spots around SLC while highlighting the duo’s sense of fun and whimsy. Creating the song took many moving pieces, all of which came together nicely. From top notch producers to help from other big names in the SLC music scene, Tomper is a new band to keep an eye on. Here's the music video; you can find them on Instagram.

Tycoon Machete: new single and video “Everything’s Fine on Wall Street”
Comprised of SLC veteran musicians, Tycoon Machete are releasing their latest album soon, giving us a taste with their latest single, “Everything’s Fine on Wall Street.” Because the song comments on the alienation of late stage capitalism, Tycoon Machete are releasing the single on streaming formats on Black Friday. “Because it offers us the best opportunity to be heard while receiving pretty much no money in return!” they said. The single previews their upcoming album The Great Machine, which explores the relationship between human and machine. “This is largely the theme of the lyrics and the soundscape we create by combining instruments such as banjos and ancient lap steel guitars with synthesizers and other electronic effects,” they said. Check out their music video below, and keep an eye out for their new album dropping soon. Find them on Instagram.

Sean Baker’s Recycled Stardust- debut EP The Purple House
Singer/songwriter Sean Baker has been recording for nearly two decades at this point, but according to him, he hasn’t created anything he’s truly proud to show people. “My band back home in San Diego, California (we were called Freako Suave) had a few recording experiences, but the final products did not have the soul or magic that I knew we were capable of,” he said. “The EP that I’m releasing next Friday has an underlying theme of change and how to deal with or think about change, which seems very fitting since I’m about to change a life-long losing streak of releasing music. I write very relatable lyrics that are beautifully human and brutally honest and it’s exciting to finally be able to share with people the sounds that have been living inside my brain.” Baker’s emotional and in-depth EP is releasing Friday, Nov. 11 on all streaming platforms. There’s also a release party to celebrate the new tunes, but the event is being held on private property, so for the location message Baker on Instagram, @seanbakermusic. Doors open at 6 p.m. that evening, and admission is free.