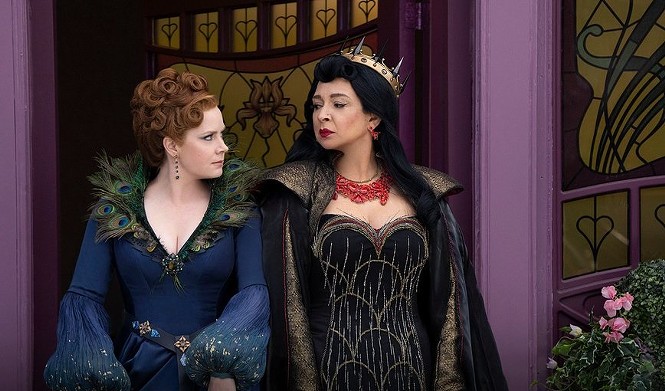 Bardo, False Chronicle of a Handful of Truths **
Plenty of classic films have been steeped in dream-logic imagery; Alejandro González Iñárritu takes that notion to a level that sometimes just doesn’t know when to take the simpler route. Broadly speaking, it’s the story of Silverio Gama (Daniel Jiménez Cacho), a Mexican born TV journalist-turned-documentary filmmaker about to receive a major award in his adopted home of Los Angeles. And it’s clear that he still struggles with the transitions both in his career and in his geography, which manifests itself in plenty of odd ways. Iñárritu repeatedly plays with the reality of what we’re seeing, whether that means something that’s only happening inside Silverio’s head, or something that he’s shooting for one of his movies. Much of that material is connected to Mexican history, from European colonization to the Mexican-American war, and I’m sure that some of that material might connect more powerfully with those more connected to that legacy. But while it’s theoretically compelling to watch someone struggle with the authenticity of his identity—most effectively conveyed when Silverio gets furious at a customs official when re-entering the United States—Iñárritu proves too enamored with his visual gimmicks, like putting Silverio’s middle-aged head on a child’s body to represent an imagined visit from his dead father. “If you don’t know how to play around, you don’t deserve to be taken seriously,” a character says at one point—and while it’s clear Iñárritu himself believes that to be true, this movie may be evidence of taking it to the extreme. Available Nov. 18 in theaters; Dec. 16 via Netflix. (R)

A Christmas Story Christmas **1/2
There’s a scene in Groundhog Day where Bill Murray’s character is trying to re-create a snowball fight that the first time around was spontaneous and charming, but in its later version becomes calculated and lacking the same spark. That’s kind of the vibe of this A Christmas Story sequel returning to the life of Ralph Parker (Peter Billingsley), who once longed for a Red Rider BB gun but now circa 1973 is a would-be writer who returns to his childhood Indiana home for Christmas with his wife (Erinn Hayes) and kids (River Drosche and Julianna Layne) after the death of his Old Man. The absence of Darren McGavin is certainly felt, not just as a pivot point for this narrative but also because of the energy he brought to the original, which the now-adult Billingsley just doesn’t quite have; Julie Haggerty replacing Melinda Dillon as Mom serves nicely. And throughout the rest of the film, the attempts to include familiar components—a visit to the department-store Santa, triple-dog-dares, fantasy sequences, etc.—start to feel just as potentially doomed as Ralph’s attempt to re-create for his family the Christmases of his childhood. It is hard to deny the curiosity factor of seeing all of the child actors from the original as 50-year-old men, and a few scenes manage there own unique charms. But there’s a big difference between a kid’s-eye-view bit of nostalgia, and something that plays out more like a middle-aged guy trying to re-live his glory days. Available Nov. 17 via HBO Max. (PG)

Disenchanted ***
The absolute sweet spot for a sequel like this is providing everything that made the original satisfying and beloved, while not feeling either like a pale duplicate, or an overstuffed case of trying too hard—and somehow this one does a pretty good job of hitting it. Set approximately 10 years after Enchanted, the story finds Giselle (Amy Adams), Robert (Patrick Dempsey), a now-teenage Morgan (Gabriella Baldacchino) relocating from New York City to the suburbs now that they have a new baby. But discontent with what has come after “happily ever after” inspires Giselle to make a magical wish for a more fairytale-like life … which, not surprisingly, backfires. On the downside, there’s not as much entertaining support for Adams, with Maya Rudolph’s town queen bee falling a bit short as an antagonist, and far too little James Marsden as the earnest Edward; on the upside, the songs by the original Enchanted team of Alan Menken and Stephen Schwartz are nearly as good, director Adam Shankman (Hairspray) keeps the energy in the production numbers, plus someone finally had the good sense to realize that when Idina Menzel is one of your assets, you damn well better give her something to sing. Mostly, there’s Adams herself, in what is effectively a dual role, and she’s just as delightful playing a wicked stepmother as she is playing the naïf. Your mileage may vary regarding whether the sincere family relationship stuff lands, but it’s a relief to find a Disney brand being extended in a way that actually feels justifiable. Available Nov. 18 via Disney+. (PG)

The Menu **1/2
Rather than a horror film per se, it feels like screenwriters Seth Reiss and Will Tracy were attempting something that would have worked as a vintage Twilight Zone episode concept—except that Rod Serling was always much more efficient at conveying the moral message in his fables. Here, a group of wealthy gourmands—obsessive foodie Tyler (Nicholas Hoult), a veteran restaurant critic (Janet McTeer), a has-been actor (John Leguizamo)—attend an exclusive dinner at an island restaurant overseen by star chef Julian Slowik (Ralph Fiennes). But there’s an unexpected guest in Tyler’s last-minute escort Margot (Anya Taylor-Joy), who begins to realize that something is a bit … off. Taylor-Joy has just the right spiky energy for our proxy in this privileged world, and Fiennes is typically great parceling out the mystery of Slowik’s intentions. However, while it soon becomes evident that people might be on the verge of getting punished for their sins, there’s a muddled sense of who actually deserves what they’re getting, and to what extent Slowik has simply lost his mind—as well as why certain members of his staff appear to be fine with going along for the ride. And while it’s kind of understandable that some of the guests are meant to represent broad types, it results in performance types that clash with those of Taylor-Joy and Fiennes. Ironically, for a story that’s at least in part about understanding when simplicity is more satisfying than complexity, the meat of The Menu’s messaging gets lost in the plating. Available Nov. 18 in theaters. (R)

The People We Hate At the Wedding **
“Broad comedy” + “earnest sentiment” absolutely can work as a movie formula, provided the broad comedy is funny enough, and the sentiment is resonant enough—neither of which quite hit in this adaptation of Grant Ginder’s novel. It’s centered around an extended family including mother Donna (Allison Janney), her oldest daughter Eloise (Cynthia Addai-Robinson), and Eloise’s half-siblings Alice (Kristen Bell) and Paul (Ben Platt), who should be united over Eloise’s impending wedding in London. Unfortunately, family rifts and individual relationship dramas run rampant, including Alice’s ongoing affair with her married boss (Jorma Taccone), Ben’s reluctance to open up his relationship with his boyfriend (Karan Soni), and Donna’s re-connection with her ex-husband/Eloise’s father (Isaach De Bankolé). Director Claire Scanlon has a talented cast to work with, and a script that recognizes the inevitable frictions of familial interactions. There are just a few too many balls to keep in the air bouncing between all of the main characters, usually allowing just enough time for one goofy set piece and one attempt at real emotion. Most of the time, those goofy set pieces just don’t generate the laughs they’re aiming for, and the precious time that remains for getting serious feels superficial. It takes a much defter touch to deliver tearful confessions hot on the heels of a humiliating slapstick fight at a public event. Available Nov. 18 via Amazon Prime Video. (R)

She Said ***
It requires some real filmmaking skill to turn shoe-leather journalism into the stuff of gripping cinema, so kudos to director Maria Schrader and screenwriter Rebecca Lenkiewicz for pulling it off as successfully as they do. Their subject is the New York Times investigation into the serial sexual misconduct of former Miramax studio chief Harvey Weinstein, with reporters Megan Twohey (Carey Mulligan) and Jodi Kantor (Zoe Kazan) attempting to get his victims—including well-known actresses—to go on the record at the risk to their own reputations and livelihoods. The film effectively provides a broader context into the experience of women of which the Weinstein case was just one symptom, from guys aggressively hitting on them in bars, to the despair of realizing your grade-school daughter already knows the word “rape.” And Lenkiewicz effectively sets the stage for the investigation just months after the revelations about Donald Trump’s predations yielded no consequences, making it reasonable for women to assume their voices would be ignored or silenced. It’s still a movie that’s made up largely of people talking, so it’s pretty key that you’ve got actors like Samantha Morton and Jennifer Ehle who can convey years of rage and self-loathing through their monologues. The focus is the work of real journalism, and that work is often frustrating, arduous and unsexy. There’s still effective drama in watching the slow drip of persistence wear away at the manipulations of power. Available Nov. 18 in theaters. (R)

Slumberland **1/2
Grief and trauma as the subtext for genre films feels fairly over-saturated, and it proves to be a risky step to apply that sensibility to source material that was a frivolous century-old newspaper comic strip. This fantasy follows an 11-year-old girl named Nemo (Marlow Barkley) whose life is shattered by the death of her beloved widowed father (Kyle Chandler), leaving her in the care of an uncle (Chris O’Dowd) she’s never met. So Nemo retreats into the world of her dreams, where she befriends the roguish Flip (Jason Momoa) and goes on a quest for magic wish-granting pearls. Director Francis Lawrence (I Am Legend) gives the dream-world sequences plenty of visual pizzazz, while also allowing Momoa’s rambunctious performance plenty of room for fun physical business. Surprisingly, the film shows the potential to be even more interesting in the real world, with O’Dowd doing great work as an introvert with no idea how to relate to his new ward. The central notion, however, is all about that fairly familiar concept of trying to escape from your troubles rather than confront them—and while the approach is kid-friendly in its messaging, it never really hits any emotional high notes. The visual theatrics tend to drive the story, rather than focusing on what’s recognizably human in a girl who needs to learn that fantasies can’t save you from unpleasant realities. Available Nov. 18 via Netflix. (PG)