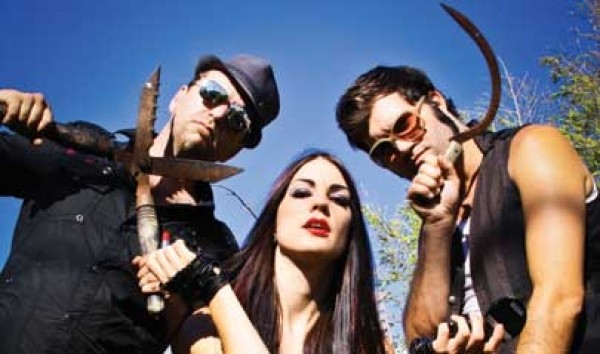 Ah, it’s my favorite time of the year: when all the plants and leaves shrivel up and die. Yay, fall! As we bid farewell to the scorching heat of summer and say hello to autumn, we can look forward to awesome things like crisp weather, technicolor trees, Halloween and—this year at least—lots of spectacular concerts. Here’s a handy guide to some of the must-see local and touring acts that are taking to Salt Lake City’s stages this September and October; for complete concert listings, visit Events.CityWeekly.net.

Genre: Psychedelic pop-rock
Why You Should Go: The trippy, experimental music—filled with electric piano that sounds like alien jabbering—produced by this Brooklyn band makes for a frenzied live show (the finale of this year’s Twilight series) that’ll have you and your friends happily dancing and bumping into one another. MGMT’s upcoming self-titled album, out Sept. 17, features exploration of new sonic territory on songs like “Your Life Is a Lie” (check out the bizarre music video), but still has plenty of the band’s signature fun weirdness.
Pioneer Park, 300 S. 300 West, 7 p.m., $5

Friday, Sept. 6
Deerhunter
Genre: Garage-rock with swagger
Why You Should Go: There something that’s intrinsically American in Monomania (4AD), the fifth album from Atlanta’s Deerhunter, released in May. The titular track is all blistering guitar licks and snarling vocals—muscular rock with more than a little punk influence. This show will call for a shot of whiskey and an attitude that says, “Bring me that mosh pit!”
The Urban Lounge, 241 S. 500 East, 8 p.m., $16 in advance, $18 day of show

Saturday, Sept. 7
The National Parks CD Release
Genre: Misty-eyed folk
Why You Should Go: There is some jaw-dropping talent between these six Provo musicians, whose debut album, Young, will be released at this show. At the forefront of The National Parks’ gorgeous, Americana-influenced sound are goosebumps- raising guy/girl harmonies, backed by masterful piano, violin, guitar and percussion. Album highlight “Wind & Anchor,” with its lyrics about lost love, will put a lump in your throat (in a good way).
Velour, 135 N. University Ave., Provo, 9 p.m., $7

Sunday, Sept. 8
Animal Collective
Genre: Experimental psychedelia from outer space
Why You Should Go: If you were one of the many fans who was bummed out when Animal Collective canceled their Salt Lake City stop in March, the show’s been rescheduled for September—huzzah! A live Animal Collective show is an experience that borders on sensory overload, with acid-trip light shows and expeditions into jungles of layered sound. Expect lots of beepy, blippy noodling, as well as songs from their latest album, Centipede Hz, released in 2012.
The Depot, 400 W. South Temple, 8 p.m., $22 in advance, $25 day of show

Tuesday, Sept. 10
Ra Ra Riot
Genre: Dance-friendly indie rock with strings
Why You Should Go: The unique sound produced by these Syracuse, N.Y., rockers is expansive but grounded with a head-bobbing beat, thanks to beautiful violin and synthesized touches wrangled by driving drums. Onstage, Ra Ra Riot is energetic and animated, prompting audience members to make with the dancing. Expect lots of songs from the band’s latest album, Beta Love (Barsuk), released earlier this year.
The Urban Lounge, 241 S. 500 East, 8 p.m., $16 in advance, $18 day of show

Thursday, Sept. 12
Murder by Death
Genre: Whiskey-soaked, gothic-tinged folk rock
Why You Should Go: This Indiana quintet is touring in support of their latest album, Bitter Drink, Bitter Moon (Bloodshot, 2012), which is the musical equivalent of a dark, gritty—but beautifully rendered—Midwest ghost story. Murder by Death puts on a fiery live show; Adam Turla’s rich baritone voice fills any venue with ease, and Sarah Balliet expertly saws away on her cello like a woman possessed. Expect cool surprises like a theremin that shoots off sparks.
Bar Deluxe, 666 S. State, 8 p.m., $15 in advance, $18 day of show

Friday, Oct. 11
Ha Ha Tonka
Genre: Woodsy, boot-stomping Americana rock
Why You Should Go: These four beardy guys from Missouri harmonize perfectly on their albums—their latest, Lessons (Bloodshot), comes out Sept. 24—but in a live setting, their rich vocal nuances really shine, especially during the a cappella “Hangman,” which will make you swoon. Expect a twangy, rowdy set, with four pairs of cowboy boots stomping the stage hard enough to raise dust.
The Garage on Beck, 1199 Beck St., 9 p.m., cover TBA

Thursday, Oct. 31
Juicy J
Genre: Booty-shakin’ Southern crunk
Why You Should Go: You’re too old for trick or treating, so get yourself to this Juicy J show and drop that ass to “Bandz a Make Her Dance.” Juicy J’s live performances are huge parties as it is, and with the extra get-weird vibe of Halloween, tonight’s gonna be trippy, mane.
The Depot, 400 W. South Temple, 9 p.m., $35 in advance, $45 day of show