Ten local albums that you don't own, but should

Every year, we see big releases from local bands we love: SubRosa, L’anarchiste, Polytype, Light/Black and Parlor Hawk, just to name a few. But out of 2013’s nearly 300 releases from the local music scene, many of the great albums were made by bands that aren’t directly in the spotlight, but are no less worthy of recognition. Here are 10 local releases (in no particular order) that may have been under the radar, but deserve your attention.

Anthropology, Anthology
This four-piece math-rock/jazz group made up of school buddies has become a major highlight with the under-21 crowd. Their debut album is filled with amazing tones and tempo changes, all woven into light-hearted melodies and fast-paced stringing from a group of friends unafraid to create new styles. Anthropology.bandcamp.com

Famous Relatives, Electric Signals
During a time that Tim Myers wasn’t actively playing with his main project, Palace of Buddies, he stepped aside to create this side project and, in turn, an album of synth-pop magic. This album is a fantastic example of electronica done right without being too standoffish or in your face. FamousRelatives.bandcamp.com

The Moths, The Moths
8ctopus Records returned with a vengeance in 2013, putting out four new releases. The most astonishing surprise of the bunch was Eli Morrison’s new project The Moths, who released this killer self-titled album of experimental rock in June. The low vocals, dirty guitars and dark rhythms will shake you to your spine. 8OctopusRecords.com

Moonlets/Ben Q. Best, Moonlets/Ben Q. Best
While Hel Audio has been cranking out the split albums all year from local electronic producers, the self-titled split from Ben Best and Moonlets is the one that stands out from the 2013 catalog. This is a fantastic album to just relax and chill to, as the ambient tones whisk you away to wherever your mind wants to go. Helaudio.bandcamp.com

Settle Down, Be Still
Kicking you in the ass from start to finish, this four-piece SLC metal band’s debut album is everything a metal album should be: hard drums, loud guitars and gritty vocals. Hands down one of the best albums Escape Goat Records has put out all year. EscapeGoatRecords.bandcamp.com 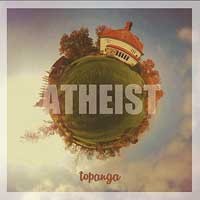 Atheist, Topanga
This is probably one of the most upbeat hip-hop albums you’ll find anywhere; the SLC emcee struck gold with his sophomore effort, speaking from the heart on every track with a fantastic set of beats backing him up. One of the most relaxed albums of the year, it’ll make you wish it was summer again. 801Atheist.bandcamp.com

Mideau, Mideau
The duo of Spencer J. Harrison and Libby Linton came together to put out this surprise indie-pop release. With a perfect blend of electronic vibes, dance rhythms and Linton’s fantastic vocals, their self-titled debut became the soundtrack to the end of summer for Utah County venues and fans. MideauMusic.com

Andrew Goldring, Forgotten Harvest
After departing Golden Sun earlier this year, the multitalented songwriter got back to making music on his own terms. This six-track EP shows his wide range of garage rock, Americana, folk and alternative cuts, all with his signature echoing vocals, which ensnare you every time. AndrewGoldring.bandcamp.com

Baby Gurl, A Name and A Blessing
This noise-rock duo of Chris Wadsworth and Jordan Fairbanks have made it their mission to have the most fun possible while playing their mostly instrumental sets. That tone comes off perfectly in their debut album, which sounds like the most awesome house-party band on speed. BabyGurlBand.com

Clay, Building Blocks
We don’t really know a lot about the mysterious producer behind the name Clay, but they sure can put together a fine album. Comprised of hip-hop beats, special effects and video-game sounds taken from classics such as Earthbound, their debut album, Building Blocks, is one of the best sampler albums of the year. Clay7.bandcamp.com