Thursday 11.8 Charge! Tonight the Babcock Readers enter the battlefield in a literary—not literal—sense. AMERICAN HEROES ALL takes a journey through the war-themed writings of eight authors’ work, including Pachal N. Strong’s Bells of Freedom from the American Revolution, Davy Crockett’s The Alamo from the War with Mexico, and William Chamberlain’s writings on World War II and the Korean War. American Heroes All @ New Little Theatre, 200 S. Central Campus Drive, University of Utah, 277-1715, 7:30 p.m. BabcockReaders.com

• Fall harvests celebrate reaping the fruits of labor, and it’s no different with the Women’s Art Center’s FALL HARVEST GALA tonight. The center celebrates its growth, both in the number of female artists it fosters as well as the many community outreach programs it supports. A small donation ($10) provides entertainment, food and an auction. Your support could help the center find itself in a bigger and better location come January. Fall Harvest Gala @ 68 K Street, 521-4387, WomensArtCenter.org

Saturday 11.10 Since 1300, woven rugs have been a significant symbol of the Navajo culture. That tradition continues, as you will see at the NAVAJO RUG SHOW AND SALE, presented by the Adopt-A-Native-Elder Program of Park City. While rug weaving has remained constant, gender roles—the ones that dictated women must be the weavers—haven’t. The 18th annual event at Deer Valley Resort features the work of seven male weavers in addition to weaving and wool carting demonstrations plus Native American poetry and story telling. Navajo Rug Show and Sale @ Deer Valley Resort, Nov. 10-11, Info: 435-649-0535

• In a tour that includes Canada, Germany and Italy, Salt Lake City is the first and only U.S. stop in the for the Essent International Skating Union’s WORLD CUP SPEED SKATING series. This weekend, the Utah Olympic Oval will be host to eight men’s and women’s qualifying events for the final competition in the Netherlands. Catch the event while it’s still in your back yard. World Cup Speed Skating @ Utah Olympic Oval, 5662 S. 4800 West, Kearns, Nov. 9-11, ISU.org. Free admission tickets available while they last at Zions Bank locations and at the venue day of event.

Sunday 11.11 Some Utahns’ exposure to Jewish culture might begin and end with whatever they gleaned from watching Fiddler on the Roof or Yentl. The JEWISH ART AND FOOD FESTIVAL welcomes one and all to experience authentic Jewish cultural traditions. Its comprehensive (and educational) highlights include a screening of Ari Sandel’s 2007 Academy Award-winning short film West Bank Story (Saturday, Nov. 10), a Havdallah ceremony, arts and crafts vendors and food by Mazza. Today, visit the Jewish book fair presented by Sam Wellers’ Zion Bookstore and watch Ririe Woodbury Dance Company perform. Park at the University of Utah Merrill Engineering Building where shuttles will transport you to the JCC. Jewish Art and Food Festival @ Jewish Community Center, 2 North Medical Drive (across from University Hospital), 581-0098, Nov. 10, 6:30-9:30 p.m.; Nov. 11, 11 a.m.-5 p.m.

Monday 11.12 Visitors to the Main Library might casually wander through Art at the Main—a gallery inside the library—after checking out a book. Make a point to take in the gallery’s newest show, watercolors by store founder JOY NUNN, on display in the exhibit FOR THE LOVE OF RED. In addition to viewing Nunn’s work (one is featured lower left), say thanks for the gallery’s efforts to expand the local art scene, as the shop soon celebrates its one-year anniversary. Joy Nunn: For the Love of Red @ Art at the Main, ground floor of Main Library, 210 E. 400 South, 363-4088, Nov. 12-Dec. 15, ArtAtTheMain.com. Reception: Nov. 16, 4-6 p.m.

Tuesday 11.13 Many know the work of EDWARD ABBEY. After all, The Monkey Wrench Gang and Desert Solitaire have become must-reads in the environmental movement. But owner and operator of his namesake bookstore KEN SANDERS considered Abbey a close, personal friend. For the first time since Abbey’s death nearly 20 years ago, Sanders speaks tonight about Abbey’s life, works and legacy to the state. You’ll discover a man as vital as the work he left behind. Ken Sanders on Edward Abbey @ Gore Concert Hall, 1840 S. 1300 East, Westminster College, 7 p.m. Info: 521-3819 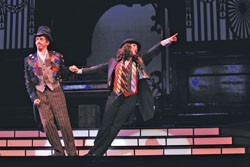 Wednesday 11.14 Take it from American composer Jerome Kern: “Irving Berlin has no place in American music. He is American music.” And that’s precisely why one Broadway Across America touring production has focused entirely on Berlin’s contributions to the genre in the musical IRVING BERLIN’S I LOVE A PIANO. Performers sing and dance through Berlin’s America, where classics like There’s No Business Like Show Business and Puttin’ on the Ritz ring a musical bell, and where even the kids can sing along to God Bless America. God Bless Irving Berlin. Irving Berlin’s I Love a Piano @ Capitol Theatre, 50 W. 200 South, Nov. 13-18. Tickets: 355-ARTS