Thursday 8.23 Before KUED-TV producer Ken Verdoia mediated the debate between Salt Lake City Mayor Rocky Anderson and talk-show host Sean Hannity, he was focused on more pressing issues (they do exist) than the politics du jour. Tonight, the Healthy Environment Alliance of Utah (HEAL Utah) presents Verdoia’s 1993 documentary ATOMIC STAMPEDE, about three generations of Utahns living with repercussions of the Cold War uranium boom. Verdoia will introduce the film—with no catcalling interruptions—followed by a panel discussion. Atomic Stampede @ Brewvies Cinema, 677 S. 200 West, Brewvies.com, 7:30 p.m.
Friday 8.24 Considering that the Wayans brothers make most of their Hollywood productions family affairs, you may be confused for a moment by seeing only one Wayans at a time. But SHAWN WAYANS also has a solo performing career, and you’ll be able to see him do a brother-less stand-up set at Wiseguys in Ogden. This isn’t necessarily the Shawn Wayans of White Chicks, the Scary Movie installments or Little Man. Depending on your tastes, that may or may not be a good thing. Shawn Wayans @ Wiseguys Comedy Café Ogden, 269 Historic 25th St., Ogden, 801-622-5588, through Aug. 25, 8 & 10:30 p.m.

• Since its inception, Kayo Gallery has rebelled against the usual parameters of a “gallery” to become a venue for music and film as much as visual art. And Kayo expands its horizons even farther for THE LOAF SHOW, a conglomeration of underground film, music and art in one night. See film and video works at no charge from the Lost Media Archive and the Free Form Film Festival (a weekly event at Kayo), live music and performance art and many other organic art forms. The Loaf Show @ Kayo Gallery, 315 E. 300 South, 532-4717, 7:30 p.m., Loaf-I.com

Saturday 8.25 Not that we don’t appreciate the many out-of-state fiction and nonfiction authors that The King’s English brings in for book readings and signings, but it’s always nice to be reminded of the local talent. Today, the bookshop presents a reading and signing by STEPHEN PAUL, whose latest book Hollow Bones chronicles what happens when the premonitions of Native American spiritual leaders come true. Stephen Paul @ The King’s English, 1511 S. 1500 East, 484-9100, 2 p.m.

• Tonight, all those antisocial evenings spent playing video games alone in your living room finally might pay off. Put your skills to the test at the MIDNIGHT GAMING CHAMPIONSHIP by competing in one of five video games: NBA 2K7, Ghost Recon Advanced Warfighter 2, Super Smash Brothers Melee, the cell phone tournament Fast and the Furious: Fugitive and the 3-D console tournament GTR2 FIA GT Racing Game. Registration is free, and the winner in each category earns cash prizes and a trip to the championship finals in Dallas. Register either online or onsite tonight at the 40- by 600-foot inflatable tent. For those who don’t want to compete but still want to play, enjoy Wii Bowling and the All-Pro Football 2K8. Go gamers! Midnight Gaming Championship @ McDonald’s Restaurant, 1155 Hillfield Rd., Layton, 8 p.m.-midnight. Onsite registration: 6-8 p.m. MidnightGamingChampionship.com

Sunday 8.26 While it is true that a Muslim is an adherent of the Islamic religion, “Muslim” is not synonymous with “Islam.” Now that that large misconception is straightened out, you’re on your way to a better appreciation of this weekend’s fifth annual SALT LAKE AMERICAN MUSLIM CULTURAL FESTIVAL. Through performing arts, the festival celebrates the Muslim culture (not religion) along with many others. Enjoy the Vietnamese Dragon Dancers and Bien Flamenco. And leave your other misconceptions at home. Salt Lake American Muslim Cultural Festival @ Washington Square, 451 S. 200 East, 671-6709, Aug. 25, 3-8 p.m.; Aug. 26, 4-7 p.m.

Monday 8.27 In the past, the American Cancer Society has asked you to walk, race and/or relay for a cure for cancer. Now, all it’s asking is that you bring a hat and sunglasses and enjoy the UTAH LADIES PRO-AM GOLF TOURNAMENT. The tournament, or THE BABE—named after all-around athlete Mildred “Babe” Didrikson, who died from colon cancer—features three-person teams on the 18-hole course. In addition to supporting the tournament—which directly benefits the Wasatch Front Unit of the society—honor a friend or family member with a flag that will fly along the 18th green, with donations beginning at $25. The Babe: American Cancer Society Utah Ladies Pro-Am @ Jeremy Golf and Country Club, 8770 N. Jeremy Road, Park City, 483-1500, noon.

Tuesday 8.28 While the Salt Lake Gallery Stroll date usually influences the opening of new exhibits, the Main Library is on its own schedule. If you’ve already checked out the talent at the stroll galleries, there are no excuses to miss the library’s exhibits JOYOUS CELEBRATION WITHOUT FRONTIERS by GUADALUPE RODRIGUEZ and YO SOY … by RUBY CHACON. Rodriguez’s photographs and Chacon’s paintings portray bicultural identity and figurative and literal borders in different ways. It may take what would be an entire gallery stroll night to appreciate them thoroughly. Joyous Celebration Without Frontiers: Work by Guadalupe Rodriguez & Yo Soy …: Work by Ruby Chacón @ Main Library, 210 E. 400 South, 524-8200, Aug. 25-Sept. 29. Reception: Aug. 25, 4-5:30 p.m. 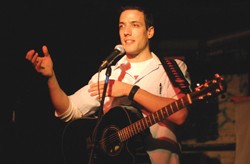 Wednesday 8.29 It’s not his name but rather the description of ROB PARAVONIAN that stimulates recognition: He’s that guy on the YouTube video who does the “Pachelbel Rant.” Oh yeah … Save for his hilarious Internet hit, Paravonian is otherwise little known, although he has appeared on Comedy Central’s Premium Blend and opened for George Carlin. So start a new buzz and see him tonight in Salt Lake City or at one of this week’s other performances. Rob Paravonian @ Burt’s Tiki Lounge, 726 S. State, 521-0572, 10 p.m.; Mo’s Neighborhood Bar & Grill, 358 W. Temple, 359-0586, Aug. 26-27, 10 p.m.