Speak and Spell: Local theater productions find humor and pathos in the power of words. 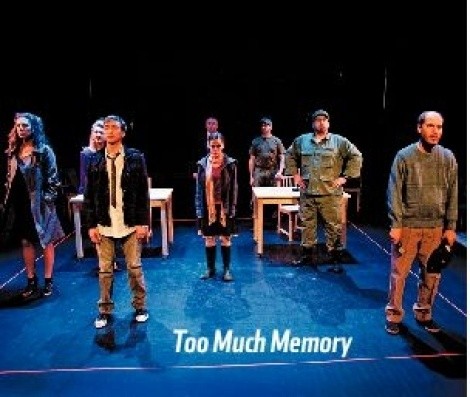 I have never laughed so much in a theater. With The 25th Annual Putnam County Spelling Bee, Pinnacle Acting Company—the best-kept theater secret in town—creates a nearly perfect evening of entertainment.

The show, which as the title suggests, is really a middle school spelling bee, is full of zany characters, clever songs, intentionally ridiculous choreography and adolescent pathos. If that were not enough, it’s topped off with a tender poignancy that fully delivers.

Some of the credit goes to Rachel Sheinkin (who won a Tony Award for the book) and William Finn (music and lyrics). The script is spot-on, creating charming, layered characters who grow beyond their initial archetypes with subtle glimpses into their inner workings. In one of the show’s finest moments, tooperfect Marcy (Shannon Musgrave) mutters a defiant/pained/vulnerable “I’m not all business” that is likely to cause a catch in your throat.

Which brings us to the execution.

Anybody could hack their way through this script and still get laughs; it’s just that good. True to form, however, PAC chooses the high road. Through keen insight, director Kirt Bateman wrings every bit of sympathy-inducing humanity out of the show with nuanced performances.

Particularly great is Zachary Hess as Barfee (pronounced Bar-fay). Barfee is an arrogant, awkward, dressed-funny-byhis-momma nerd stereotype with a speech impediment, acne and an over-the-top secret spelling weapon by the name of “The Magic Foot.” Yet Hess manages through total commitment to the character to create a real person to root for, rather than just an amusing pile of gags and tics. His singing and dancing stay true to Barfee’s limitations and quirks without descending to mockery.

This little gem of a show is the best thing I’ve seen in a while—simple as A-B-C.

Greek tragedies were all about big, eternal issues: morality, destiny, truth, the folly of pride, etc. Their universality is the reason classics such as Antigone have been adapted and re-adapted through the ages to reflect contemporary concerns.

Too Much Memory is today’s Antigone and, like the best of these adaptations, it serves to clarify the big issues while retaining the core ritual elements of Greek theater. The Big Issue at hand is free speech— specifically, the breakdown of democracy during a time when real political dialogue has become impossible. (Sound familiar?) There’s no proscenium arch, no big opening curtain to announce the start of Salt Lake Acting Company’s production. Everything unfolds naturally: The house lights are still up as the Chorus (Lane Richens) traces a chalk outline upon the stage, establishing the boundaries of a dramatic space. Richens draws in the audience with an opening monologue, introducing the actors and accurately describing the play itself as “an adaptation of an adaptation of a translation.” Throughout the show, Richens’ warmly engaging presence serves the same function as Greek choruses in ancient times, with a self-aware twist that seems modern and yet utterly authentic.

Morgan Lund’s standout performance as Creon brings so much depth to that conflicted, bloody old tyrant that we see his character in an entirely new way. Another knockout is Stefanie Londino, whose gentle portrayal of Ismene is simply lovely.

As the play unfolds, Antigone (Nicki Nixon) is granted the opportunity to speak out against a great injustice. And, while her right to free speech is not violated, she is framed as a fringe element not to be taken seriously. (In any case, media constraints render her statement meaningless.)

Freedom of speech is the cornerstone of democracy; it represents the power of the individual to right great societal wrongs. But what is its meaning when nobody bothers to listen? We might as well be screaming into the void.