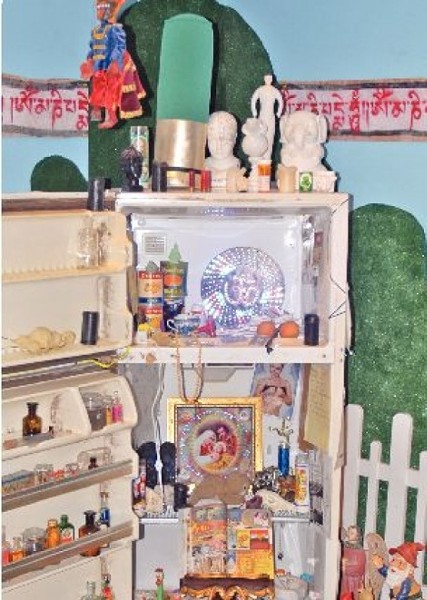 Seven years ago, ArtistsOfUtah.org and 15 Bytes online local arts newsletter founder Shawn Rossiter mounted an exhibit of 35 artists under 35 years old, to showcase new visions in the Salt Lake City arts scene—and this year, he felt it was time to do it again.

The group of artists were selected by the Artists of Utah board of directors. The works, 75 in total, traverse the palette of artistic genres, from paintings, photography and sculpture to conceptual works like Michael Hanley’s performance piece in which he shuffled sheets of white cardstock, placing one at random on the wall as a comment on the jurying of art shows.

Any of these artists could mount a solo show successfully with a very strong collection of images. Several already have been seen in local galleries, like Chad Crane’s painterly evocations of history and Steven Stradley’s oils inspired by microbiology. Several new names were spotlighted, like Travis Nikolai’s “Pan Galactic Reality Fragment,” an installation (pictured) consisting of a refrigerator stocked with everything from Jagermeister to rotating strobe lights to a Hindu prayer scroll, looking like an appliance from another dimension.

Video interviews with artists will be on view for the Oct. 18 Gallery Stroll opening, and awards will be given by a panel of judges. At the September opening, it was one of the best-attended spots, rogue judges placing blue ribbons on some of the works with inscriptions like “Rock On.“ In addition to Artists of Utah, the show is sponsored by the Salt Lake City Arts Council.