Is 2012 the best Caymus vintage ever? 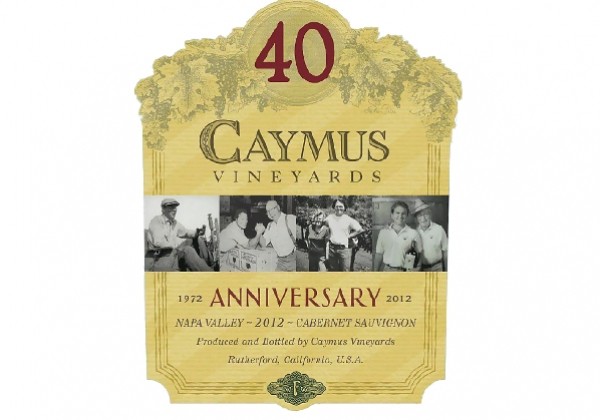 The 2012 vintage of Caymus Napa Valley Cabernet Sauvignon—released earlier this month—marks the 40th Anniversary of Caymus Vineyards, the cornerstone of the Wagner family portfolio of wines, which also includes Belle Glos, Conundrum, Emmolo and Mer Soleil. Founded by Charlie and Lorna Wagner, along with their renowned winemaker son Chuck, Caymus produced its first vintage in 1972—a mere 240 cases of Cabernet Sauvignon. Today’s production of Caymus Cabernet is approximately 65,000 cases. As renowned wine expert Robert Parker said of Caymus, “Not many wineries anywhere in the world can match the Wagner family’s consistent record of success.”

Caymus Vineyards is about nothing if not focus. Where some of its Napa Valley neighbors produce everything from Marsanne and Sauvignon Blanc to Petite Syrah and Rosé, the laser-like focus at Caymus is all about Cabernet Sauvignon. Perhaps that’s why Caymus is the only winery to have ever garnered Wine Spectator’s most sought-after award twice. Caymus Vineyards Special Selection Cabernet Sauvignon ($119) was given the Wine of the Year award two times.

At Pallet, we were first treated to 2012 Emmolo Sauvignon Blanc ($15.26), an elegant and refined wine with very restrained oak, bright acidity and pear aromas with grapefruit and lime flavors. It’s made by the youngest of the Wagner clan, Chuck’s daughter Jenny Wagner, who is a talented 26 years old. Emmolo is the name of Jenny’s maternal Italian family, and the winery was founded by Cheryl Emmolo, her mother, in 1994. The Emmolo Sauvignon Blanc’s minerality and acidity worked wonderfully with Pallet’s deliciously light and artful plate of beets with chevre, frisee, Marcona almonds and crispy prosciutto.

Jenny Wagner’s Emmolo Napa Valley Merlot 2011 ($54.99) is a knockout. Anyone who thinks they don’t like Merlot should try this one, especially with gnocchi. At Pallet, I got to sip the Emmolo Merlot with delectable gnocchi in brown butter; at Fresco, it was paired with potato gnocchi bathed in a silky Lagrein cheese sauce with spring onions and Chioggia beets. The Merlot is beautifully structured, with fine tannins, rich, ripe and concentrated—one of the best examples of Merlot I’ve ever tasted. If you’re tired of mediocre Merlot, give this magnificent one a try.

Pallet’s oh-so-tender and tasty beef cheeks accompanied a Belle Glos Pinot Noir, Clark & Telephone 2013 ($34.99). The Clark & Telephone vineyard gets its name from its location—situated near Clark Avenue and Telephone Road in the Santa Maria Valley. The wine is loaded with raspberry, blackberry and plums on the nose and palate, with a toasty oak finish and hints of cinnamon.

The 40th Anniversary Caymus Napa Valley Cabernet 2012 deserves to be sipped with incomparable cuisine, and Fresco’s Logen Crew knocked it out of the park with his Pecorino-crusted lamb and Apician-spiced white lentil polpette, a legume-based take on the Italian meatball. Winemaker Chuck Wagner has said that the 2012 Cabernet is the best wine he’s ever made. Well, I haven’t had the fortune of tasting 40 years worth of Caymus Cabernet, but I can definitely say that you don’t want to miss this one.

Happy anniversary to the Wagners and their wine family!