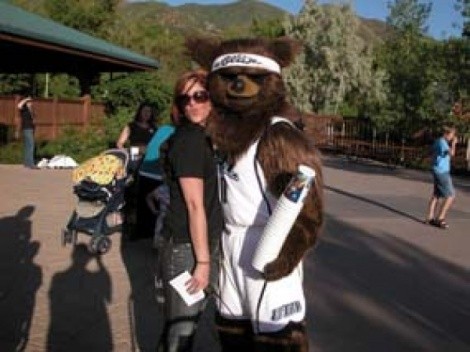 Is it proven that frogs and other amphibians are going extinct?
Don’t forget to include the caecilians too! The World Conservation Union estimates that at least one-third of known amphibian species are threatened with extinction. That’s not just one type; it’s all across the board, all around the world.

What’s going on?
The major culprit used to be due to habitat loss and degradation, but now there’s a rapid-moving frog fungus called chytrid that is causing extinctions at alarming rates. Combine that with habitat destruction, climate change and pollution, and you can see why Kermit says, "It’s not easy being green!"

Are Utah frogs going extinct as well?
The Columbia Spotted Frog and the Tiger Salamander are two examples of amphibians found here in Utah. Sadly, they’re not exempt from the same plight frogs are facing around the globe. For example, habitat loss has led to the decline of the Columbia Spotted Frog populations, especially along the Wasatch Front. On top of that, the introduction of the American Bullfrog to Utah (where it is not native) has also led to declines in many amphibian species that are Utah native. Always remember that the issues facing frogs and amphibians aren’t in foreign, far-away places; it is happening right here in our own back yards.

What is Hogle Zoo doing to increase awareness of amphibian conservation?
Hogle Zoo is one of nearly 100 institutions accredited by the Association of Zoos and Aquariums (AZA) around the country that has committed to celebrating the Year of the Frog in 2008. Prior to 2008, the zoo was involved in projects where we sent keepers to South America to help with the frog fungus problem down there. They actually went into Panama to find the frogs, wash them off, and get them into an amphibian center "clean room" to help save entire species. In the United States, the U.S. Fish and Wildlife Service has listed 37 amphibian species under the Endangered Species Act. AZA-accredited zoos and aquariums may be their only hope for survival.

Why should people care about the fate of frogs and newts?
Frogs are indicators of what’s going on in the environment. Most frogs live both in water and on land so they’re affected by problems in both types of habitat— so they’re a good early warning system of problems that may eventually affect the rest of us. They also keep down the numbers of insects, which is important to successful crops, and frogs are also a good food source for other animal species.

Again, frogs are a good idea of what’s going on in our environment, not to mention a key component in the food chain. You think mosquitoes and insects are a problem now? Just think what it would be like without frogs. There are already one-third of amphibians faced with extinction, can you imagine if one-third of the world’s mammals were facing that?

What can the average person do to be kind to frogs?
It’s easy to do things to conserve and help frogs, and there are easy things that people can start doing today! For instance, conserve water at home, school and work. Even turning off the faucet when you brush your teeth saves huge amounts of water from going down the drain, and in turn saves a clean habitat for wild amphibians.

Here’s an easy one: don’t pollute! Do your part to keep garbage, chemicals and nonnative plants and animals out of the natural environment.

And of course, sign up with the Association of Zoos and Aquariums (AZA) to be a friend of frogs by visiting yearofthefrog.org and help raise awareness for Year of the Frog.

Leap Day is also known as a day when women can ask men to marry. Do you think that Hogle Zoo would be a good setting for a marriage proposal on Feb. 29?
Sweet! That gives me four more years to be a find a date, get him to like me, then drop the bomb on him! For real though, Hogle Zoo is a great place to propose on the 29th of February or any other time of the year; except during Year of the Frog we should remember that every frog is, in fact, a prince.