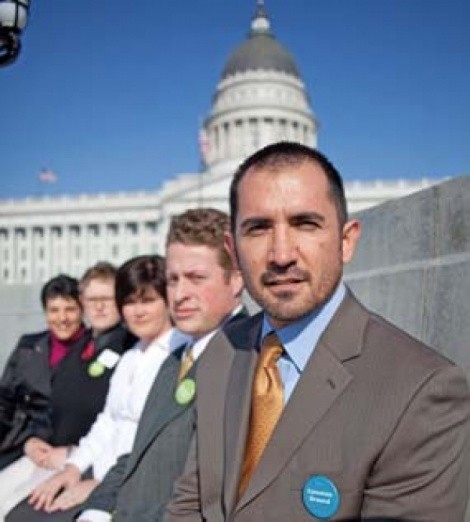 Mike Thompson, right, is executive director for Equality Utah, a nonprofit that advocates for LGBT statewide and local civil rights. He and his staff (L-R) Stephanie Pappas, Lauren Little, Keri Jones and Will Carlson are looking for common ground with this year’s Legislature.

What was your personal reaction to California’s Prop 8 passage?
It was like I got kicked in the gut. Barack Obama, the candidate who represented hope and change, was the elected the same day Prop 8 passed. The Yes on 8 campaign played on fears, used inaccurate arguments—nothing new there. It was a bit hard to understand how these results could happen in the same election.

LDS Church members played a prominent role in the passage of Prop 8. Meanwhile, the church insists it is not anti-gay. Do you think the church means what it says?
nI’d like to believe they meant it. However, actions demonstrate convictions. We’re waiting for the “we’re not anti-gay” actions. In my experience, words come easily when you’re trying to create an image; they’re much harder to live up to if they’re not sincere. Let’s hope they were sincere.

What is the Common Ground Initiative?
Putting aside our differences on the issue of marriage equality, we launched the Common Ground Initiative as a direct response to LDS Church statements made during and after the Prop 8 campaign. LDS Church statements said: The Church does not object to rights for same-sex couples regarding hospitalization and medical care, fair housing and employment rights, or probate rights, so long as these do not infringe on the integrity of the traditional family of the constitutional rights of churches.

So, Equality Utah took the LDS Church at its word and decided to craft legislation on each of these issues. We asked the LDS Church for its support. We also asked that church leaders ask its members to do the same, just as it did on Proposition 8. As of Monday, Jan. 19, Human Rights Day here in Utah, it has been 70 days without a response from the LDS Church.

Even if the LDS Church supports the initiative, does that mean the Legislature will?
It doesn’t. However, it’s no secret that a significant percentage of our Legislature is LDS. If the LDS Church asked for support of this legislation, we’re hopeful church members, legislators included, will respond with the same type of enthusiasm and support as they did when asked to support Prop 8.