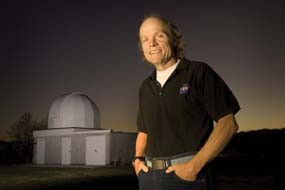 Patrick Wiggins, NASA solar system ambassador to Utah and northeastern Nevada, aka “astrogeek,” wants you to “look up” in the night skies on Aug. 11-12 to watch the Perseid meteor shower.

What are the Perseids, and why should we care?
They’re tiny little parts of a dead comet. It’s not like in the movies when these big chunks are flying through space. Most Perseids (and most meteors in general) are typically no bigger than a grain of sand. Do I worry about them? No. They hit the Earth’s extreme upper atmosphere and rub against the air because they’re going so fast. It’s like when you rub your hands together to make your hands warm. Meteors go a lot faster, and they get a lot warmer. They literally glow, burn up and what’s left falls harmlessly to Earth as just what we call “micrometeoritic dust.”

Why do we care? Because they’re neat. There are actually three of what I consider the major showers of the year. The Perseids isn’t always the most showy but the other two happen in the dead of winter. And the idea of going out in your back yard and lying down and looking up in January or December is not too appealing for people in the Northern Hemisphere.

But here it is August. John Denver even wrote a song about the Perseid meteor shower [“Rocky Mountain High”] when he talks about “raining fire in the sky” in August. It’s just a neat little natural occurrence.

Unlike things like comets that are not terribly predictable, the Perseid meteor showers are pretty predictable. We know where they are in space to a pretty good degree and we know very well where the Earth is, and when the two positions coincide, we know there is going to be a meteor shower; we just hope that it’s going to be a good one. There are those years when they sort of pass us by. But on other years, we hit an especially rich pocket of meteoroids. And those basically are the ones that put on the really good shows.

In a typical Perseids, under really good observing conditions, you’ll see one and sometimes two per minute. Rarely, more than that, but one or two per minute, that’s a pretty decent show for meteors.

Which direction in the sky should we look for them?
Not to be facetious but just “up.” When I try to tell people exactly where to look, they concentrate on that one spot, and then you kind of miss all the rest of them. So really, the best way to observe meteors literally is from a lawn chair, or in my case, I climb up on my nice inclined roof. You just use all of your vision—your main vision in the front and your peripheral vision. You just stare out into space. Like when you were in physics class in high school, you just stare out into space. And you let the meteors call attention to themselves.

More important than where to look for them is from where to observe. If you decide to park in the middle of downtown Salt Lake City, forget it, because the light pollution makes the sky brighter than the meteors so you can’t see them. So you want to get away from light pollution (that includes the moon, by the way. There is also natural light pollution, and it just so happens that this year during the peak of the shower, the moon is conveniently going to set, so we won’t have to worry about the moon after midnight on the 12th). So, just get out of town. I know people who are actually planning to go out to the Salt Flats. The darker your sky, the more meteors you’re going to see. Even in suburbs in Salt Lake, you can position yourself away from the lights.

The other thing is what time to look. If you look before midnight, the number you see will be relatively small due to the “license plate effect.” If you look at the license plate on the back of your vehicle, there are very few dead bugs. On the front plate, there are a bunch. As a result, what we’re really running into here (pun intended), before midnight, the observer’s location on the Earth is basically facing away from where the meteors are coming from. After midnight, your place on the Earth is now turned around and is starting to look toward where all these things are coming from.

Hence, you’ve just become the front license plate. And the later it is at night, the more of them you tend to see. So if you’ve only got an hour to devote to this, maybe from 3 to 4 o’clock [on the morning of Tuesday, August 12], literally go out, have a friend along to help you stay awake and some munchies, and just lie back and stare at the sky for an hour and see what you can see.

How do you stay awake?
Music in the background. An iPod. Friends. Just don’t let them turn lights on, that’s a big killer. It takes a good half-hour to get dark-adapted and about a half-second with a white light to screw up your dark adaptation.

Maybe go to bed early on Monday night and set your alarm for 2 a.m. on Tuesday and get up and drive away from the city.

Is a meteor shower a good excuse to be late for work on Tuesday?
It depends how forgiving your boss is. If you have a boss who’s really into astronomy, you invite them to come along. You can say: “We’re gonna have that weekly meeting, anyway. Let’s have it on the Salt Flats on Tuesday morning about 3 o’clock.” Chortle. Chortle.

Aren’t we supposed to make a wish on a falling star?
Boy, you could make a lot of wishes on the night of Perseids. But meteors are happening all the time. The Earth picks up about 100 to 200 tons of meteors every day. We’re definitely not on Jenny Craig diet when it comes to weight loss for the Earth. I’ve heard that [wishing] tradition before. I suppose I’ve tried it once or twice, and it didn’t work. That’s why I’m single. I keep wishing but it never happens.

I’m going to be more interested in counting how many meteors I see. The idea is how many per hour you can see. If you can get a group of people, then you can all sit there and look out and holler. The most I’ve ever seen in one morning was 1,500. That was very unusual. It was with the Leonids in November 2001. That was kinda comfy. Me and the lady I was seeing at the time, we drove down near St. George—nice dark skies down there. She had a convertible. So we just put the blankets around and just looked up and counted meteors all night.

Did you tally them on a piece of paper? How did you keep track?
You just count them. It’s hard to write everything down. So, you just go “one, two, three, four” … this is Patrick’s idea of a fun date. No wonder I can’t get a date.

Well, if you go with the right person. Maybe a CPA.
Or another astronomy geek. An “astrogeek.”

Any other astronomical treats in the August skies?
Jupiter is probably the biggie because it’s so bright and easy. But if you’re looking at meteors, that’s what you want to be centered on. The star parties that the Salt Lake Astronomical Society will be having this month. On Friday, Aug. 8 at Harmons Brickyard. And on Aug. 9 at This Is the Place park. The one on Aug. 23rd will be at the Stansbury Park Observatory. It will start early with swap meet for telescope equipment. Later in the evening, as it is getting darker, we’ll actually show an old science-fiction film. We’re not sure what it is but something like The Day the Earth Stood Still or Forbidden Planet. And, of course, we’ll have the telescope set up until at least 11 p.m.