A restaurant and a live music venue collaborate on a vision for a radical future. 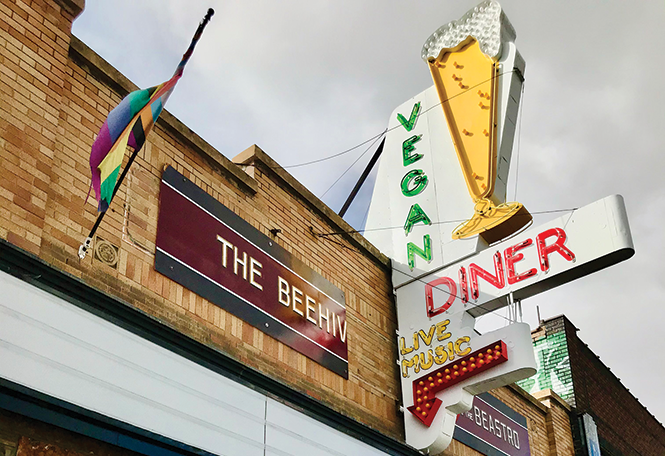 For many, the pandemic has been something of an incubator for innovation. That much is certainly true for the occupants of 666 S. State Street, where the dual DIY forces of The Beehive music venue and The Mark of the Beastro restaurant live together. The venue and restaurant duo have done about as much as any other venue or restaurant—they haven't had shows, and the vegan restaurant is only open for takeout. But a number of developments have kept them both afloat, and are setting them up for an even more radical future.

While some local music venues have converted to socially-distant shows, backyard shows or have simply not re-opened, The Beehive has utilized their space for community-oriented purposes. "During the pandemic we've done a ton of classes," says Mark of the Beastro owner Andrew Early. "We've done a concealed carry class, we've done a banner making class. Things that are kind of all over the spectrum, that needed a space and it worked out [here].

"We kind of want to reprioritize, to where we're actively seeking those things out so that this becomes more of a hub for those workshops and skill-shares," he continues. "We've talked about everything from hosting a Stop The Bleed class next month, to even doing a workshop on how to get your music out there, on social media and Spotify for free or cheap, whatever the sliding scale is, along with how to get recorded for cheap. So, everything from DIY project stuff to straight-up activist street medic training, out-on-the-ground stuff." The venue has also served as a drop-off center for homeless outreach supplies, coordinating with new groups like the Open Air Shelter.

For anyone familiar with the kind of DIY culture that The Beehive and Beastro are part of, the cross-over of art-fostering and activism shouldn't seem strange. And for those who were out on the streets this past summer, The Beehive wouldn't be unfamiliar as a safe harbor. One infamous July night found protesters gingerly working their way down State to the venue, police bordering to the North and South, to get water after many were battered outside the DA building. "It's kind of just how we both are," quips venue manager Kale Morse.

Of his own activist past, Early explains, "We'd go to protests all day, be exhausted and then go to shows that night. And it was kind of this reminder of 'hey, we're all in this together, today was really hard, but there's a passion there.' Which is one of the hardest things about the pandemic, is that the revitalization you get from that arts community has been really hard to seek out."

Enter The Beehive's pandemic-Patreon, launched in January to support the venue and give opportunity for music engagement, featuring in-venue video recordings of local artists. Morse says the recording process itself has felt like old times.

"We filmed three months of content in one day: three different bands doing live sets, of which we've only been able to release one so far," Morse says, referencing the Breakfast in Silence video that's currently out. "But that one day, even though I was running around and fixing sound, it was one of the most important days to me in the last year. Just experiencing loud music in a big room again, even though there were only seven of us here."

Early concurs that it was a bittersweet flashback to the past: "There was one point where one band had finished up and the next band had shown up, but we didn't want to cross over and have two groups inside, so we were all hanging out, out front, while the music was playing inside and just talking, and it just felt so ... normal again."

As for things at Mark of the Beastro, the vegan diner-style joint has kept their dining room closed, which proved rough at first, though they've since bounced back just fine. With smooth sailing there, Early is taking on a new leadership role. The old owner is backing out, leaving Early owner of both establishments, and for he and Morse to ponder yet another change—that of becoming a non-profit.

It may sound like a very un-punk thing to do, especially considering the ways in which many non-profits pander to rich benefactors to get their funds. The Beehive, though, isn't interested in being used by rich folks as a tax write-off. "We just want to find the right level of not having to sell out too much, but getting money from the state to train people to fight against the state," says Morse with a wry laugh. The two are looking to orgs like the Berkeley-based Alternative Music Foundation (Gilman, to fans) as an example of a DIY punk venue that went non-profit, and now operates as an all-ages, true-collective music club.

With all this to keep them busy, re-opening the venue isn't much on their minds. Early says that following the CDC guidelines has worked out well for the Beastro so far, and they plan to keep it up. Morse remarks, "I don't feel safe until everybody feels safe."

That's a sentiment that could go for a lot of the community work The Beehive and Beastro are doing. Keep up with them on Instagram at @beehiveslc and find their Patreon link at beehivecollectiveslc.com.