A Change of Pace

The Invincible Czars conquer two forms of media at once. 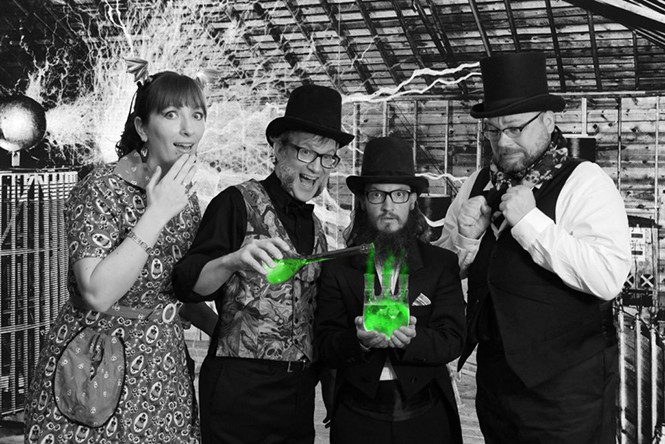 At South by Southwest in 2012, virtuoso guitarist Gary Lucas performed a new, original score to Coffin Joe's 1967 psychedelic horror film, This Night I'll Possess Your Corpse at Austin's Alamo Drafthouse theater. Either one of these attractions alone would have been something special. In addition to working with Captain Beefheart, Nick Cave, Lou Reed and John Cale, Lucas co-wrote and played on two tracks ("Grace" and "Mojo Pin") from Jeff Buckley's masterpiece, Grace, plus his solo albums are out of this world. Coffin Joe flicks are supremely creepy, sensual, psychedelic and flat-out weird—chances to see them on the big screen are rare. Watching Lucas play along to the film while silhouetted against the lower left-hand corner of the screen, which he does only occasionally, was all but a once-in-a-lifetime event.

Musicians have written new scores for public-domain silent films for decades. Giorgio Moroder famously tackled Fritz Lang's 1927 sci-fi film Metropolis in 1984. F.W. Murnau's 1922 German expressionist vampire flick Nosferatu is one of the most popular cases; Christian Death's Rozz Williams gave it the goth-industrial treatment in 2001, and it was released on DVD by Cleopatra Records. Lucas still performs his version, and there are several by other composers or acts on YouTube—including snippets of one by The Invincible Czars.

From Austin, the quartet started in the late '90s as a rock band, playing geek-themed original music—inspired by everything from Tchaikovsky to Van Halen—in clubs. They'd also begun to gain notoriety for performing their own adaptation of The Nutcracker during the holidays. In 1998, guitarist and founder Josh Robins realized some of the music he'd been writing sounded like film scores. Having noticed scene peers, like Golden Arm Trio and Brown Whornet, composing alternate scores for films and playing them as live accompaniment at Alamo screenings, the Czars wanted in. The theater gave them a shot at Yakov Protazanov's psychotropic 1924 sci-fi joint Aelita: Queen of Mars.

Robins says The Nutcracker shows were an accident, a joke that became an annual gig. The scoring wasn't just a whim, but it got The Invincible Czars noticed. "The silent films have kind of surpassed that as the more popular thing that we do," Robins says. Nearly 20 years later, they've scored seven films, including Nosferatu.

Last March, they performed Nosferatu at the Tower Theatre in Salt Lake City—where Robins was born. "I'm prime Mormon stock," he jokes. Although the band has been doing this for a while, it was the first time they'd performed here. Even so, it was their biggest show yet, by nearly triple. "We beat our previous attendance record by 185 [people]," Robins says.

Down on the Tower's floor, the band—dressed in suits, capes and top hats, except for Leila Henley, who wore a dress—took their seats facing the screen. In the flickering lights, they played their score, a blend of Romanian classical and folk music with nods to Danny Elfman, Ween and Ennio Morricone. Throughout the film, the main-floor all-ages crowd and the over-21 VIP balcony above them reacted audibly to the music, which—as scores did in the silent era—provided emotional cues as well as sound effects. Many of us had seen the film before, and already knew the original as a truly frightening interpretation of Bram Stoker's classic tale, Dracula. With this new music, Nosferatu was resurrected with renewed impact: more and better creeps, and even laughter. Many new fans stayed around to congratulate the band afterward and buy T-shirts, posters and CDs—even the rock stuff.

Since that Salt Lake City show, Robins says The Invincible Czars' film-score shows continue to attract larger crowds. "The next one in Seattle sold out," he says, still astonished. The band is back on tour, performing Nosferatu and Dr. Jekyll and Mr. Hyde—sometimes both in one night. On Tuesday, they return to the Tower to play Jekyll. He's not sure why it's happening now, but the film performances are definitely catching on. Perhaps we just crave something new; a fresh spin on the concert and film experience; a media mashup resulting in a new appreciation of an extant work.

But Robins isn't trying to analyze it. Creatives already have a hard time making a living and, if something works, it works. He does think, however, that after seven horror/sci-fi scores, it's probably time for a change of pace. What might that entail? "We need to do more comedy," he says.