A chat with Twuan and Chief of Mind Body & Beats 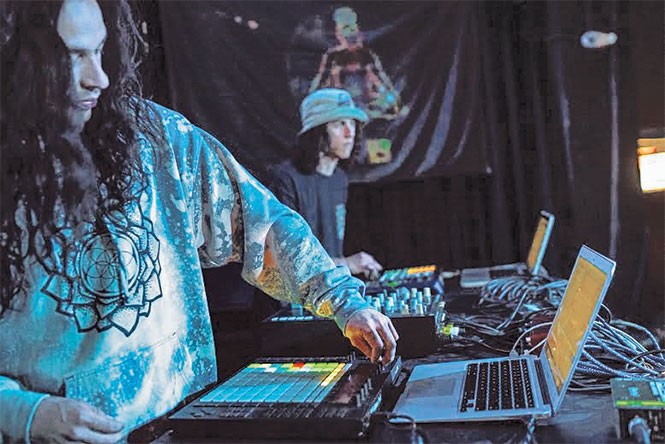 Mind Body & Beats, a duo out of Salt Lake City, is composed of two young music producers who go by Twuan (Anthony Ruiz, right) and Chief (Nathan Martinez, left). The two met in high school, and have been making music ever since. They've worked with hip-hop artists such as Felly and TUT. By putting on some of the best local underground hip-hop shows, their long-term plan is to eventually take the city by storm.

How did you guys get started?
Chief: In middle school, I messed around with a bunch of different stuff. I first started making mash-ups, and then tried to rap, and eventually realized I was better at producing, so I stuck with that.

Twuan: My sophomore year, I got FL Studio and basically taught myself everything. I've always wanted to produce. I knew that's what I wanted to get into and had been playing the guitar since I was a kid. Then Chief and I linked up late sophomore year and decided to make something, and it's been official ever since.

What is your main goal when it comes to your art?
Twuan: Our main goal just in general is to inspire people, man, mostly to make people happy through the music—whether you're having a bad day, going through hard times, or whatever it may be.

Chief: We just want people to be able to listen to our music and forget about everything for a second and to give them that hope that eventually everything will be fine.

Considering how young you are, what's the biggest challenge you regularly have to deal with?
Chief: Mental blocks, for sure. Like when you're creating something and just hit a wall and can't figure out how to continue. It sucks so much, but you just gotta keep going, have patience and not quit.

Also being young has its pros and cons. It's awesome to be young and be able to do what we're doing. But, then, it also sucks when we're at our shows, and we try to tell people to not do certain things, and they just disregard it and don't feel like they need to listen to us 'cause we're young.

What makes you want to collaborate with an artist?
Twuan: First, we need to like their music, of course. But, also, it has to be genuine and that artist needs to be passionate about what they do, like we are. And if those things align, then we would probably want to collaborate or work with them in some way.

Chief: It also has to do with timing, though. It has to be the right time.

What project are you most proud of?
Chief: We're pretty hyped on this last project we dropped, called "Nowadaze," which you can stream on our SoundCloud. Honestly, we're proud of most of our work.

Twuan: Yeah, especially the TUT song we just dropped. But, to answer your question, I'd say this Mick Jenkins feature that we have.