My valentine to Utah's cheesiest treats. 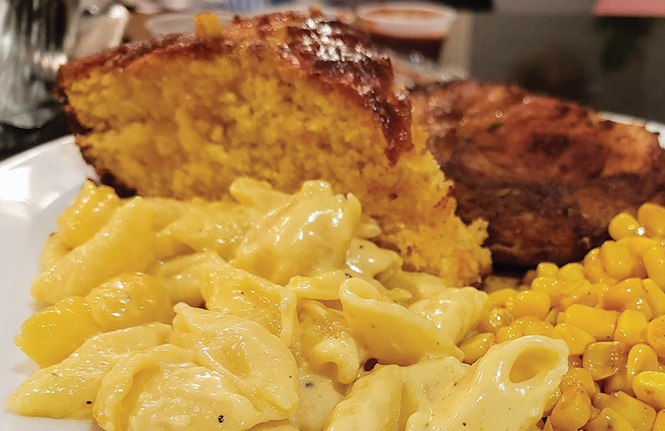 My three-year-old daughter is going through a serious cheese phase. String cheese might be her favorite, but any time I break out shredded cheddar, parmesan or mozzarella, I soon feel a small tug at my shirt followed by a vision of her cupped hands eagerly awaiting a sample. It reminded me of my own childhood, which was filled with grilled cheese, mac and cheese, string cheese and far too many jokes about cutting the cheese.

I'm sure I'm not the only one who has come to this realization about themselves, but cheese might have been the first food that I loved before I understood that I love food. As such, I'd like to dedicate this Valentine's Day to the local eats that have kept my love of cheese alive and well.

Since mac and cheese is at the forefront of my childhood memories, let's start there. Sauce Boss (877 E. 12300 South, 385-434-2433, saucebosssouthernkitchen.com) and Vertical Diner (234 W. 900 South, 801-484-8378, verticaldiner.com) represent the two sides of this coin. At Sauce Boss, mac and cheese has transcended to Golden Splendor ($3.25), a sinfully gooey and velvety mélange of shell pasta and a cheese sauce that is not of this world. The pasta is never overdone, lending the perfect amount of al dente texture to all that cheesy magnificence. I try to branch out and get other side dishes when I visit this Southern favorite, but the Golden Splendor always calls me back.

Not only does Vertical Diner's mac and cheese ($4-$7) exemplify the warm, melty radiance that I've come to expect, but they do it without any cheese at all! Yes, the miracle of nutritional yeast mixed with some other plant-based trickery creates the luscious layer of "cheese" in their mac and cheese, and it still manages to hit all the right notes. Plus, if you're feeling crazy, you can order the Ian Mackaye burger ($10), which comes with a scoop of their signature mac and cheese on top of a veggie burger patty.

I would be remiss if I didn't add funeral potatoes to a list of cheesy foods that I adore. A few years back, I took a trip around town to see which rendition of funeral potatoes did right by this Utah classic, and the winners still hold up. Garage on Beck (1199 Beck Street, 801-521-3904, garageonbeck.com) makes my favorite version with their fried Mormon funeral potatoes ($8)—golf-ball sized rounds of cheesy potatoes deep fried in a cornflake crust. I'm a sucker for the unconventional repurposing of a classic, and this dish is always money well spent.

For a more traditional take on funeral potatoes, I'm a fan of the way Wasatch Brewery treats the dish. Though it's only available on their brunch menu, they serve up king-sized scoops of buttery mashed potatoes topped with a generous helping of cheddar cheese and topped with crispy cornflakes. It's got the classic look of something you'd find at a ward potluck, but it tastes like a slice of gastropub flavor.

Though as a kid I didn't get much exposure to paneer—those delectable cubes of cheese popular in Indian cuisine—it's become one of my favorite cheesy eats. Lately, I've been digging the saag paneer from Saffron Valley (1098 W. South Jordan Parkway, Ste. 102, 801-438-4823). You can get this tasty dish at any Saffron Valley location, but this is my preferred haunt since it's not far from where I live. Paneer is good in any curry variation, but something about the hearty, spinach-based saag really makes the paneer flavor stand out. I love a cheese that can hold its own as the star of a dish, and paneer's springy texture and mild flavor is perfect as the canvas for all that flavorful curry.

To conclude this piece on the right note, I think it's appropriate to explore cheese fries. This is a side dish that appeals to both the kid and the adult in me—they're humble but arrogant, simple but sophisticated, and delicious no matter who you are. They are the unsung hero of the diner/burger joint circuit, and they always make a meal shine just a little brighter when they're around. My current favorites can be found at JCW's (multiple locations, jcws.com) and Leatherby's (multiple locations, leatherbys.com). Both restaurants offer something similar—golden brown fries topped with several layers of shredded cheddar cheese that slide under the broiler until everything gets fused together in a melty pile of cheesy spuds.

I'm sure there are some cheesy dishes that I've neglected to mention—I could definitely go on about Philly cheesesteak sandwiches from Moochie's (multiple locations, moochiesmeatballs.com) and Fat Boy Phillies (5823 S. State Street, 801-261-0313, facebook.com/FatBoysUtah)—but I'm glad to be near so many local restaurants that love cheese just as much as I do.