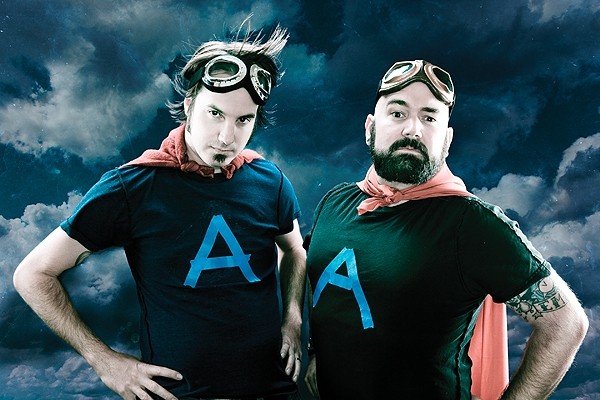 Utah’s longest-running podcast and its cinema-loving hosts haven’t just reached a milestone episode this month; they’ve also branched out into creating material for the medium they celebrate.

Since March 2008, Adam Palcher and Adam Sherlock have been cranking out double-feature episodes of the popular A Damn Movie Podcast, which features their bold and humorous discussions about classics and current blockbusters, as well as the bombs and not-so-creative cinematic catastrophes from the past century of filmmaking. They’ve entertained each other and the occasional guest with reviews and Top 5 lists, all in the spirit of provoking conversation about movies.

“My entire trajectory has changed since we started,” Sherlock says. “It gave me a career and a new skill set. It is really quite remarkable.”

The show has been one of the most consistent podcasts coming out of Utah, and can boast the title of “longest-running local podcast,” edging out even the highly successful Geek Show Podcast by one month. During their run, the duo have earned their fair share of City Weekly Arty and Best of Utah awards, both for A Damn Movie Podcast and side projects such as Sherlock’s work with Spy Hop Productions’ podcast Sending Messages.

The longevity, Palcher says, “comes down to the conversation, the fly-on-the-wall aspect of the show. I think our big brother/little brother friendship is something people come back to enjoy.”

While working on the show has been a rewarding experience for both men, it was only a matter of time before their love of cinema pushed them into creating works of their own. Palcher is a former film critic for Salt Lake Magazine and was a University of Utah film student; he says the show itself actually gave him an education in the process of making films, as well as the confidence and inspiration to put his skills to use.

In 2011, Palcher made his filmmaking debut with Harlan, a 20-minute short about a serial killer (Ryan Jensen of local band Vile Blue Shades) confessing to a reporter (Sherlock) about his crimes at a remote cabin before going to turn himself in. Writing the film had the duo researching real serial-killer confessions to find the right voice for Jensen. Filming took place over the course of a weekend in Oakley with a small crew, and was entirely funded through a Kickstarter campaign. The film was screened at Copper Palate Press during the October 2011 Gallery Stroll to two packed crowds.

Palcher’s second film, Head Over Heels, recently made its debut at Kilby Court on Sept. 15. The film stars Kasota Stone (Matty “Ballgame” Robinson from Filmspotting) as a real-estate agent who digs through the lives of his clients and invades their personal space. The film presents both the potentially horrifying side of putting your house on the market and looks at how people present themselves to the world—oh, and there’s a love story, too.

The film took cues from Palcher’s life. “I was selling my house this past year, and was waiting across the street in my car,” while prospective buyers were coming to look at the house, Palcher says. “A guy showed up by himself and was in there for like 20 minutes, and I couldn’t stop wondering what he was doing. Was he going through my stuff? That’s essentially the plot: an excuse to talk about how we represent ourselves to the world.”

It’ll be a busy month—Sept. 23, the podcast will hit the remarkable milestone of episode No. 200, where the duo will be discussing a film voted on by the listeners, as well as reminiscing on the show’s history and going over listener feedback.

Many podcasts don’t survive past the first year, and those who make it past that often quit before episode 100. The show surviving five years and 200 shows is a huge achievement and speaks to the respect and admiration of listeners. But the hosts have more of a humorous take on it.

“I know this sounds crazy, but for some reason I thought we would have done more episodes by now,” Sherlock says. “It’s like the kid in high school that was into a band a year before everybody else was. In other words, there is a time and a place when you are motivated to bring that point up, but when you think about how petty and nerdy it makes you sound, you reconsider.”