Cecil Smith discovers—and releases—a record he doesn't recall having made. 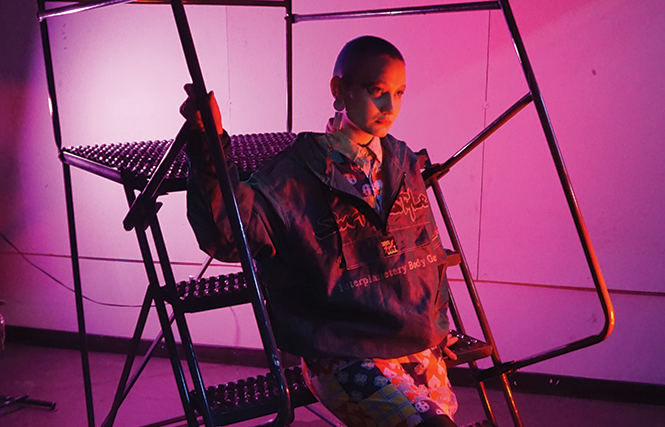 While it may seem obvious to point out that art is usually fundamentally tethered to its creator, it seems that sometimes the relationship between the maker and the made can fracture from reality. Or at least that's what seems evident upon hearing the backstory behind Cecil Smith's newly released album, Torn Cocoon, a digitized recording of a vinyl record with a strange and otherworldly origin.

Smith, who specializes in making dreamy, synth- and guitar-driven music under the name PK Opal, isn't immune to the necessity of tasks more mundane than music-making, like doing chores. At the end of September, not long after his 27th birthday, he was doing some tidying up when he discovered a 10" vinyl record sitting under his bed, one that he'd never seen before, unmarked and unlabelled besides the worn-in cover art. Smith remembers feeling shocked by the ghostly image that greeted him—a vintage photo of a clown doing semi-splits on the ground and making a strange face.

"I don't know if I can really put into words that feeling of finding it," he says. "That clown image is obviously pretty concerning."

Upon putting the record on to hear what was on it, Smith found tears streaming involuntarily down his face, though he insisted that he wasn't crying. Rather, it was some kind of bodily reaction to realizing that the voice on the record was indeed his own—but he didn't have any recollection of writing or recording these songs. "It was like songs that I would have written, definitely in my lyrical style, but I have no memory of them," he says.

Smith does point out that some of the songs were strange renditions of songs he did dabble with in the past. Folks who've seen a PK Opal set might recognize refrains from songs like "Break Our Teeth On Pavement," from Smith's 2019 record Glittering Serpent. That original version is faster, more upbeat, with its weary refrain, "we'll bank on being famous, in a world that fucking hates us," also showing up Torn Cocoon's much slower and spookier version "Our Vicious Teeth and Viscous Sweat." Glittering Serpent also features "Girls Before Swine," the lyrics and melodies of which show up altered on Torn Cocoon's altogether more dizzy, "Before Girls Before Swine."

Still, Smith has no memory whatsoever of creating these edited tracks, though he did name them after considering what they might be about; "They were basically alternate versions of songs that I've actually written and released, so some of these are definitely almost like another person recorded them," he says. Smith's titling of the found record references the themes of metamorphosis that typically show up in his writing, while also indicating "that something has escaped from a cocoon rather than emerged from it."

The album also gets strange and experimental, too, though dreamy, experimental pop is not outside the realm of what Smith usually experiments in. "Moving Through Blue" is perhaps the strangest of the songs with its samples of a baby-doll-like voice hiccuping "uh-oh" throughout the woozy song, which Smith says is actually similar to something he wrote for a rock opera called Sick Girl, performed last year for the Deseret Experimental Opera. "They all felt like they were about me and from me, if that makes sense," Smith says of the songs. "I feel like it manifested under my bed. I told my therapist about it and she was like, 'Sometimes stuff like this happens, metaphysical things can create physical objects.'"

And while that may sound like an x-file to some, for believers in doppelgangers, it doesn't sound too wild. "A separate version of me sent it," Smith remarks. "I think a lot of them are songs about emotional responses to old memories ... or desires, you know? I think the first song is definitely about desire," he says, referencing the opening track "The Devil on Her Back," a brief but haunting song where the doppelganger Smith details their swim toward a devil, kissing her as she kisses back.

Smith's friend and fellow musician, Bly Wallentine, also didn't recognize the songs, but did agree to help digitize and master them just in time for both the beginning of the spookiest month, and for October's Bandcamp Day, with profits that Smith directed to the SLC Community Bail Fund. As to why Smith wanted to take the songs into his collection of music online, he says, "A lot of them are somewhat similar to an earlier songwriting style that I've had, so they fit probably not with PK Opal a whole lot, but just my overall style. I wanted to digitize them because I felt like they were really interesting, and some of them had some production that I hadn't ever really experimented with before."

Some tracks feature brass instruments, like the melancholy cornet on "Lemon Seed," and those were, strangely, qualities Smith was already planning to find room for on the new album they're slowly working on. Smith's response to the record's appearance in his life seems to have been a gracious one despite the oddness of it. "I think there's only one copy," they chuckle. It stays under the bed where it appeared, and Smith says simply, "If it ever wants to go back home, it can."