A Drinking Club With a Running Problem 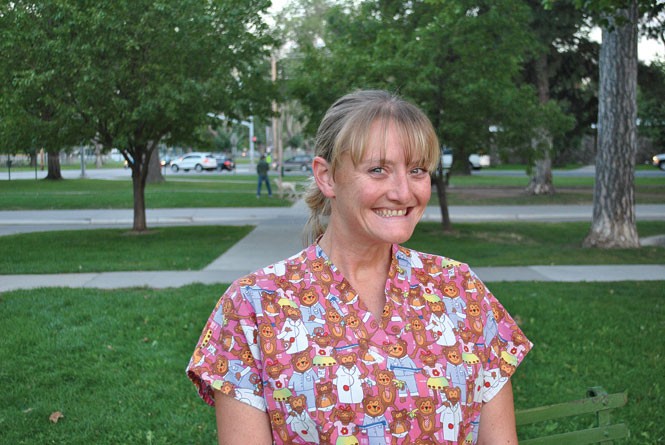 Jokingly referred to as "a drinking club with a running problem," the worldwide Hash House Harriers is a mysterious group with myriad traditions—including beer, nudity and Hash names, which began in order to eliminate issues of military rank and, locally, now involves being asked embarrassing questions while sitting pantsless on a block of ice. Nurse Amy Caywood (Hash name Smells Like Kermit's Finger), who started running in 2007 with the Boise, Idaho, Hash House Harriers and has since hashed all over Utah, California, Phoenix and Alaska, met with City Weekly to explain the group and another tradition—the annual charity event called the Red Dress Run. Utah's Red Dress Run, hosted by the three local Hash House Harrier groups, is happening Sept. 27. That event is $20, with proceeds going to the YWCA, but regular runs are free for first-timers, and $5 afterward to cover beer and supplies. Visit MeetUp.com/Hash-House-Harriers-in-SLUT to get involved.

What's the history of the Hash House Harriers?


The Hash is a worldwide club, started in 1938 in Malaysia. It kind of died out during World War II and then started up again. The Hash has been here in Utah since 1991. Another group started about four years ago. There are three different groups, but it's all very incestuous—I'm in the leadership of all three groups. We get along, there's no animosity. It started as a very small group of 10 or 15 people, and now there's between 30 and 40 who come to a trail.

Is the Hash House Harriers for hard-core runners only?


Some clubs, like Boise's, are definitely more focused on the running. Here, we have a lot of walkers—all different skill levels of runners and walkers. There are people who'd never exercise except at Hash, and then there are people who run marathons and Spartan races. And there are people in the back who make sure everyone gets in safely. But every group is different in every part of the world.

I started hashing in 2007 in Boise, and because they're all runners, my boyfriend at the time was like, "Let's run a marathon." Now I've run 16 marathons. When I first went, I just knew. You know when a group is good for you. I was like, "I'm 30 years old, how am I just hearing about this?" It's a family. We help people through divorces and deaths. We all take care of each other.

How much of a Hash is drinking and how much is running?


There'll be a Hare, and they're the trail-layer for the day. They'll pick a spot to meet—we've hashed as far north as Logan and as far south as Provo. Everyone will meet, maybe we'll have a beer, and then we go through what's called Chalk Talk, where there's marks on the ground, and that basically tells you where the trail's going to go. Then the Hares are off, and the Pack waits 15 minutes. Their goal is to catch the Hares—it rarely happens, because the Hares are trying to be tricky. A check on the ground means that the trail can go in any direction. And sometimes there's a false trail—sometimes you'll go 15 marks and it'll say YBF, which means You've Been Fooled. There are two or three beer checks, where everybody will stop and have a beer. The trail is usually between three and six miles long. You meet at the end and call out accusations—like if you use a Hasher's real name instead of their Hash name, if you miss the last trail, if you didn't bring a whistle—just funny, silly stuff. And then we'll have some drinks at the end, and sometimes we'll go someplace after.

We always are very earth-conscious and only use chalk and flour to mark. We always recycle. We never trespass, there's nobody under 21, if anybody asks us to leave, we go.

What happens at a Red Dress Run?


There was a woman known as the Lady in Red who went on the trail in this red dress and heels and didn't realize the trail was like 18 miles. There are a few versions of the story, but they came up with this idea to do a Red Dress Run where everyone wears a red dress and all the money goes to charity. Each group picks their charity. This year, we're doing the YWCA. You just come in a red dress—everybody, especially the guys—and here in Utah, we start uptown and then go through the U tailgating. It's a huge party.