A Hawk and a Hacksaw

Small World: New Mexico’s A Hawk and a Hacksaw find a second musical home in the Balkans. 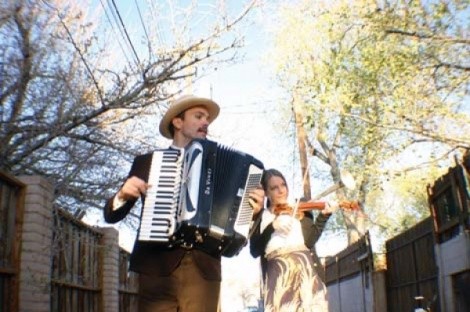 Stroh violins are used widely by street musicians and gypsies throughout Europe. Their street-market sound is amplified through a metallic horn, rather than acoustic resonation. When asked about this unique instrument, A Hawk and a Hacksaw’s Heather Trost excitedly relates a story as her bandmate Jeremy Barnes—former drummer of Neutral Milk Hotel—plays the accordion in the background, adding a surreal effect to the phone call from New Mexico.

Traveling around Europe, where she and Barnes lived for two years, they stumbled upon two Stroh-playing buskers in Romania. The two duos played music for each other, happily alternating songs.

“It was so cool. Mine was broken and they knew how to fix it, so in broken French and Romanian sign language they took mine and I gave them a bit of money for theirs,” says Trost, proud of her souvenir.

Music, and loving it, isn’t confined to “normal” means of communication, or even geography. Although based in New Mexico, A Hawk and a Hacksaw draw influences from the former Yugoslavia, Greece, Turkey and Romania, creating a sound all their own—although reminiscent of Beirut and DeVotchKa. Trost says that New Mexico and the Balkans are more alike than expected. And both regions’ influences are represented on the band’s new album, Cervantine, arriving March 8.

Adding subtleties to the duo’s sound, mariachi and norteno music were ever-present in New Mexico and have, surprisingly, made their way to the Balkans, too.

“Mexican music is highly influenced by European brass bands because of colonization. Now, there are a lot of brass bands in Europe that are learning Latin styles. It’s this interesting cultural-feedback loop,” Trost says.

Cross-pollination is nothing new, but Trost says, “It’s been sped up with the Internet and people being able to explore other cultures without traveling.” Although they admit to using YouTube to find new music, “armchair traveler” is not an accurate description of this duo.

During their two years living in Budapest—studying music and playing at dive bars, weddings, clubs or on the streets—they took trips to the Balkans, specifically to Transylvania in Romania, and saw similarities to home. “Both areas are keeping their culture and language intact, but [are] also interacting with the larger community. There are similarities of how communities remain true to cultural identities,” says Trost, specifically in architecture, local customs and, of course, music.

Their European time was fruitful, facilitated by playing with local musicians. “It can be a little intimidating to play with people you don’t know or are in awe of. But people everywhere just want to connect. Music is a fundamental aspect of that,” Trost says.

The gypsy spirit and its musical leanings rely heavily on communality. As such, the two lean toward collaboration to learn and grow and, more practically, to add sonic depth beyond the duo’s range without using electronics.

With that in mind, they recorded Cervantine, despite the limitations resulting from their favorite collaborators being in Europe. Instead, they used the Internet. In Albuquerque, they tried a different tack during recording. “We had always overdubbed a lot of our stuff. Before, we would record a basic track and we would have people record over it while we traveled around Europe,” Trost says.

With the foundation done in Albuquerque, collaborator Chris Lidouski added multiple instruments remotely to the album, while his sister Stephanie provided some vocals. Cervantine was recorded in 2010, the same year Barnes and Trost started their own record company, L.M. Dupli-cation. That decision didn’t come from simple necessity, but to fulfill a dream. Trost says they want to go back to Romania to record their friends and idols. With an assist from A Hawk and a Hacksaw, the two regions seem to move closer again.

“It’s not just for ourselves but for the music that we love to hopefully reach a wider audience,” Trost says.%uFFFD