A History of Violence

In summer 2012, directors of Utah’s domestic-violence shelters, desperate for money to keep their doors open, formed a committee that would represent them and the battered women and children who seek their help. They invited Peg Coleman, the recently appointed executive director of the Utah Domestic Violence Council, to attend. When Coleman told the shelter directors that advocating for them “was what UDVC was supposed to be doing, people were pretty confused,” she says.

But it was Coleman, fresh from a nine-year stint running a shelter in Alaska, who was to end up the most perplexed. “It was heartbreaking to see so much struggle and suffering that doesn’t have a voice,” she says. “The job of the coalition is to give power to that voice.” But when she tried to reposition her supposedly autonomous nonprofit to be the voice of shelter providers and domestic-violence victims, she encountered entrenched opposition from local government officials. She also found that Utah places an unusual emphasis on treating (typically male) domestic-violence offenders with funds that, advocates argue, should be dedicated to serving victims.

Utah’s 16 shelters, three of which are managed by the Division of Child & Family Services, typically function in poverty, advocates complain. “It’s a much better deal to work in McDonald’s; it’s often better pay, you get breaks and benefits, less heartbreak and, often, sadly, more respect,” Coleman e-mailed a state official.

Rural shelters, in particular, are often in dire straits, with one bed available per 348 square miles, compared with urban Utah, where it’s one per .089 miles. The Richfield shelter, which covers five counties, can afford to have only half its lights on. The downtown Salt Lake City YWCA, the oldest and most powerful presence in domestic-violence services in Utah, has one of its four floors closed because of lack of funding.

In 2012, more than 4,099 people found protection from abuse in Utah’s domestic-violence shelters, but more than 2,200 adults and children were turned away in the same period from the YWCA alone. YWCA CEO Anne Burkholder estimates that statewide in 2012, close to 2,000 households’ requests for shelter were turned down due to lack of resources.

Logan-based shelter Community Abuse Prevention Services Agency [CAPSA] turned away 56 families in 2012. “We need more beds or the ability to get them into transitional housing,” says CAPSA Executive Director Jill Anderson, who says her resources are always stretched to breaking point.

She recalls one recent day when she had gone to Salt Lake City for meetings, stayed up till 2 a.m. writing grants, then, an hour after she went to sleep, received a call from local law enforcement that they could not reach the on-call staff at the shelter.

Anderson rushed over to the shelter to find that the one staff member she can afford to have working the night shift—at $7.25 an hour—was counseling a suicidal client and had forgotten her cell phone. Meanwhile, the police needed a trained sexual-assault worker from the shelter to be with a rape victim in a local hospital. 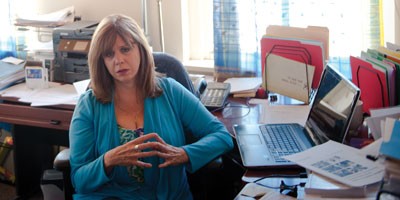 “We are so underfunded,” Anderson says.

That’s an issue that the Utah Domestic Violence Council is supposed to address, at least according to the National Network to End Domestic Violence, which represents 50 state domestic-violence coalitions nationwide. State domestic-violence coalitions emerged from the grass-roots battered-women’s movement of the 1960s, and in 1994 began receiving federal funding through the Violence Against Women Act. The nonprofit coalitions, federally required to be autonomous and nongovernmental, support organizations that provide “immediate, lifesaving services” for domestic-violence victims, namely shelter providers who are required to have the majority vote.

UDVC started in 1978 as an advisory council housed in the Department of Human Services. Although it was spun off as an independent agency in 1994 so it could apply for federal funds, local government involvement— or direct management, some would say—in domestic-violence nonprofits, both UDVC and private shelters, has continued. State meddling has long been a source of tension and frustration, and has resulted, advocates say, in a marginalization of their role and the people they serve.

“Part of our role as nonprofit advocates is to sometimes push back against the system, so if it isn’t responding or providing to survivors in a helpful, healthy way, then [we can] say these policies need to change,” Anderson says. “If they are so involved in the nonprofits and governing them, then we can’t play that role, and survivors aren’t going to have their needs met.”

When New Jersey-raised Coleman was hired to run the UDVC in 2012, only eight shelter providers had votes on the up to 36-member UDVC council. But after 55-year-old Coleman and her board wrote new bylaws to align her nonprofit with the requirements of its federal funders by giving shelter providers control—and curtailing a block of six votes permanently held by domestic-violence-related state offices—she found her efforts the target of behind-the-scenes lobbying by state officials.

Utah’s domestic violence community is awash with coalitions, councils and state offices all dedicated to helping victims, or at least their cause. But relationships between key members of the many acronymed organizations can be volatile, begging the question of how a system that fights so doggedly with itself can effectively fight for the victims they all serve.

For some, the power struggle between representatives of state offices and nonprofits involved in domestic-violence and sexual-assault work boils down to the ever-increasing need for shelters pitted against shrinking resources, but other longtime advocates and providers perceive a more nuanced fight being waged within the domestic violence community: a battle between Utah’s patriarchal, family-driven values and the victim-centered standards of shelter providers who focus on protecting victims from their abusers and help victims build new lives for themselves.

“Utah obviously has very strong family values and a high regard for the authority of men in the household,” Coleman says. “That’s why it’s very important to have the separation of church and state, and to have different points of view to not allow our own hopes, dreams, biases and belief systems to compromise safety.”

THE RABBIT HOLE
On Coleman’s downtown Salt Lake City office wall is a picture of Alice falling down the rabbit hole. That’s how Coleman’s felt since she arrived in Utah.

YWCA CEO Burkholder says previous executive director Judy Kasten Bell pursued a decades-long advocacy for domestic-violence victims and oversaw a complex evolution of UDVC from “a government-sponsored group to an independent nonprofit organization.” When Kasten Bell decided to leave after 10 years, Burkholder chaired the search committee for a new executive director. Among other qualifications, she says, the search committee was looking for someone committed to the critical role that frontline advocates play, “someone who was a strong leader, who would be fearless speaking out on strengthening Utah’s response to domestic violence.”

In Coleman, they found someone with 35 years of frontline experience. Coleman took over UDVC in April 2012 following nine years of running a domestic-violence and sexual-assault shelter in Homer, Alaska.

Such was Utah’s apparently progressive approach to domestic violence on its grant applications that “I thought I was coming to kumbaya land,” Coleman says. She anticipated using her experience working on domestic violence, substance abuse, mental illness and homelessness to focus on policy, and support people doing the work. But it took only a few months for her to realize that Utah was “a puzzling fire-walk.”

Shortly after taking over, Coleman drove around the state to visit shelters. The lengthy distances quickly made it apparent how thinly stretched rural service providers are in Utah. When Coleman arrived at the first shelter, her office called to say Ned Searle—Gov. Gary Herbert’s point man on domestic violence, running the Office of Domestic & Sexual Violence out of the Commission on Criminal & Juvenile Justice—was upset that she had gone by herself to see the shelters.

“I was very surprised there was an expectation that I would go with a state official,” Coleman says. She didn’t want to make the state angry, she says, but she wanted an unvarnished picture. “If their funder shows up, they’re not going to say what they need.”

As she toured the shelters, she found that shelter directors, typically earning around $35,000 annually, were struggling with paltry resources. “Do I cut my salary in half or do I cut services?” was a common question, Coleman says.

“Karen” knows how it feels to call shelters for help, only to be told to look elsewhere. Her name has been changed for this story.