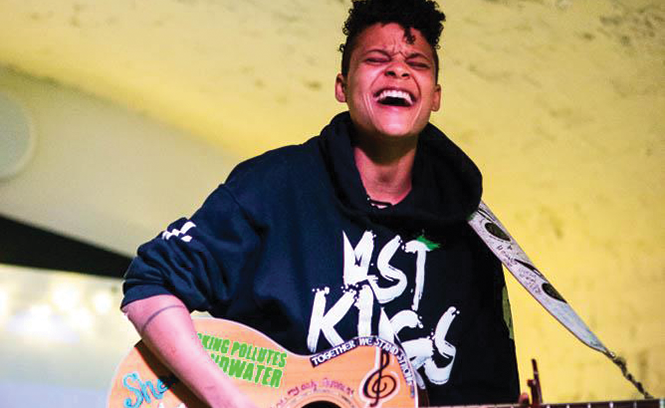 Last year, a Juneteenth celebration took over Washington Square Park at the beginning of what would be a summer of protest around police brutality and systemic racism in Utah and the United States as a whole. It would also become a summer that would carry considerations of racism into more mainstream contexts, where Black people would once again seek to have their voices heard—and a year later, that's still needed. Get familiar with those voices at these upcoming Juneteenth events.

32nd Annual Utah Juneteenth Festival and Holiday Commemoration. This Weber State University-associated date might be the most comprehensive Juneteenth celebration in the state, as it is part of a constellation of week-long events. Those include the State of Black Utah Town Hall Meeting: Education, Equity and Justice on June 11, featuring a screening of the documentary Beloved by Marian Howe-Taylor, a Juneteenth Film Festival in Partnership with the Utah Film Center on June 15 which will show Nationtime and a virtually streamed Juneteenth Concert with Excellence in the Community on June 19 at 8 p.m. featuring Dee-Dee Darby-Duffin Quintet. Also on that Saturday, June 19, the 32nd Annual Utah Juneteenth Festival and Holiday Commemoration will kick off at the Ogden Amphitheater with a ton of artists to look forward to. National artists include Young DRO, the "Kansas City Songbird" Zenobia Smith and more regional and local artists TBA. The music will circle around other facets of the event, including a Mr. and Miss Juneteenth Scholarship Pageant and Juneteenth Essay Contest winner announcement and more activities for all ages. There are also more Juneteenth events to look forward to after this musical centerpiece, including the Father's Day Tribute on Sunday, June 20, also at the Ogden Amphitheater and the Black Business Expo down at The Gateway in Salt Lake City one Saturday, June 26. Find your groove at any of these free Juneteenth events, and get more info at weber.edu/JUNETEENTH.

Juneteenth Freedom Day Celebration at The Complex. Swing by The Complex on June 19 at 6 p.m. to see one of the most packed nights of music the day has to offer. A diverse set of musicians comes by way of NMOTION, a group of musicians with a wide range of musical backgrounds. That includes one of NMOTION's originators Charles Cooley, the Motown touring drummer for the late Edwin Starr and the Starr Child band, who recently has performed with names like Utah's Alex Boyé. He's joined by fellow accomplished musicians who have credits from gospel and Motown to jazz and funk and on to conga and soul: Anthony "Amp" Worthy, Anthony "T-Ray'' Summerhays, Michael Malloy, Greg Lang, Hope E. Ayers, Alex Baca, James Morris, Dylan Wolfe and Katie "Lady K" Lewis. To add even more talent to the night, they'll be joined by locals Icky Rogers, The Pho3nix Child and Cherry Thomas, with beats provided by the one and only DJ Juggy. There's also eats by way of Jamaica's Kitchen, Shrimp Shak and Mas Gorditas, and kids' activities in the parking lot. This will be one night not to miss, and you can get tickets for $25, or groups can pay $30 for a table that seats four. This is an all-ages show, and more details can be found at thecomplexslc.com.

LVRS Presents: Juneteenth, A Celebration of Freedom and Independence. If you recall our feature story from last week on the new soul night entertainment group LVRS SLC, this is the Juneteenth event that was mentioned there. This soul night in particular will still live at Good Grammar, the downtown bar where they've made a comfortable home for themselves this summer and where they've thrown several successful events already. Saturday, June 19's Celebration of Freedom and Independence will feature music by LVRS co-founder DJ Luva Luva, and doors are at 9 p.m., leaving plenty of time for attendees to maybe grab a pre-party bite at one of the great restaurants on Good Grammar's homestretch of Gallivan Avenue. Visit @lvrsslc on Instagram for more details.

Juneteenth: A Celebration of Black Voices. If you want to get inspired, get over to The Clubhouse on Sunday, June 20 for a late Juneteenth celebration presented by W.A.R Gathering. The headliner for the evening of music and a rising star in Utah music is Shea Freedom, a Black trans man who besides plying his solo musical craft spends his time advocating for youth in the foster care system, environmental issues and equality. He's spoken for Mental Health America, California State Foster Parent Association and created his own workshop called TRANScend 101. He'll be joined by Honey and the SLC folk Americana band Early Successional. More artists are TBA, and tickets are $20 for general admission, $40 for meet and greet, Q&A and VIP Lounge. VIP Meet-and-greet and the Q&A are at 6 p.m. - 6:30 p.m., with GA doors at 6:45 p.m. and show at 7 p.m. Go to facebook.com/WarGathering for more info on the event and ticket links.