A Lesson in Change

In his first weeks as principal at West Lake Junior High, Ike Spencer learned that student gang members controlled a certain hallway, preventing other kids from using it. So, as the school’s doors opened at 7:20 each morning, Spencer would sit on a ledge in that hallway.

Students had done their research on the school’s first black principal, who began his tenure in 2010. “Mr. Spencer, aren’t you from Compton?” they would ask. Whether it was his years growing up in gang-plagued South Los Angeles or his daily presence on the ledge, gang dominion over the hallway melted away. “Kids weren’t afraid to walk there anymore,” Spencer says.

Now, on a cold February morning almost three years later, Spencer, in shirt, tie and trousers, strides through the hallways of the school, a walkie-talkie in one hand. A two-minute burst of an ABBA song plays over the school’s public-address system, counting down the seconds to when the school’s 1,200 students have to be in class. Spencer’s gravelly voice calls out the names of children dawdling to class.

“Once they walk through that door, they’re mine,” he says. “For the next six hours, I’ve got to show them a caring environment, with the understanding I expect something back in return.”

West Lake Junior High, which opened in 1964, is located at 3450 W. 3400 South in West Valley City. A Title 1 school, the majority of families whose children attend the school are considered low-income, based on the number of students who qualify for free school lunch. This triggers close to a million dollars in annual federal and state grants to help balance out some of the negative educational impact of poverty.

It’s also considered the toughest school in the Granite School District, if not in Utah, Spencer says. Statistics tell some of the story. Eighty percent of the students come from low-income families. The student body is 60 percent Latino, 31 different languages are spoken by students and 60 percent have achieved proficiency in English as a second language. The school’s 59-member faculty—of whom only two are minorities, neither Latino—face daunting challenges, as do the students themselves.

“I’ve definitely got the kids that come to school hungry,” Spencer says. Teachers talk of students who are homeless, who’ve witnessed their undocumented parents being arrested by immigration officials, or who live in a small apartment with four families.

West Lake’s challenges, Spencer discovered shortly after taking over, extended beyond the personal hardships students themselves face. The results from the 2009-10 academic year’s Criterion-Referenced Tests (CRTs)—the annual grading of the school in the core subjects of language arts, math and science—revealed the school’s year-to-year performance had declined. If the school’s performance dipped for one more year, it would make it a “failing” school under the federal No Child Left Behind (NCLB) act.

Twenty years ago, “you could teach like you’re a college professor,” Spencer says. “The teacher lectured, and if you can repeat it, you get an A.” But the demographics of West Lake have changed so dramatically, from a majority white student population to Latino, that “we definitely needed help to get to so many different kids with so many different needs.”

Spencer illustrates the need to address student engagement through a tale of two classrooms. In one, Gurpreet Tambhar teaches math, moving from one student’s desk to another, looking them in the eye, checking on their comprehension, keeping every student engaged. In the second classroom, another math teacher remains at the smart board—the electronic equivalent of the chalkboard—while the same few students answer his questions. Others sit silently at their desks, bored or lost.

“They’re responding and copying versus using energy to try to figure out things,” Spencer says, standing at the back of the latter class. “She should be giving the lesson,” he continues, pointing at a female student who is answering the questions correctly, and the teacher “should be back here,” moving around, checking for understanding.

The United States is going through an educational revolution, says Mike Fraser, Granite School District assistant superintendent. “We are expecting our teachers to do more and more.” With the mix of technology and cultural shifts reshaping classrooms, “administrators are the messengers” of such changes, and what they have to say isn’t always popular. When Spencer implemented changes to how teachers are supposed to work in their classrooms to better reflect the diversity of needs in the student body, many in the faculty fought what they saw as a dictatorial approach.

Several teachers recall Spencer telling the faculty at his first meeting as principal that West Lake was a failing school and he was there to turn it around. Spencer denies that. “People got this mixed up with Lean on Me,” the Morgan Freeman movie where he played a hard-nosed principal trying to save an inner-city school. “First of all, I didn’t know if I could fix it,” he says. “I knew if they stuck to the same strategies, they weren’t going to turn it around, but I also knew if we used the right strategies, we could be successful.”

NOT ONE LEFT BEHIND
Spencer grew up in Compton, a city in California’s southern Los Angeles County that is home to a heavy concentration of gangs, such as the Crips, the Bloods, MS-13 and Surenos.

While his father laughed at his claims as a boy that one day he would be president of the United States, Spencer’s mother, Anna, always championed his educational ambitions. Spencer’s sports prowess helped him avoid the life of gangs and drugs his friends pursued, and he eventually secured a football scholarship to the University of Utah. 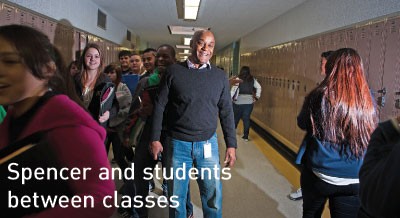 The first of his family to go to college, he recalls a celebration akin to a wedding. More than 200 relatives saw him off, the back seat of his Volkswagen full of fried chicken for the drive.

Spencer credits his passion for teaching in part to his mother’s selfless dedication to his education. Not only did she help him escape the cycle of poverty that consumed many of his friends in Compton, “My mom always made sure I understood I was blessed and had something to give back,” he says.

But his dream of getting a degree and returning to Compton to teach was soured after his high-school-age stepbrother was shot and killed during Spencer’s sophomore year of college. Spencer, newly married with a son, realized that “as much as I thought I could handle Compton, I had a family to care for.”

Spencer played football for the U for 33 games, and every one—except for a game he played in Hawaii—his mother drove from Compton to see him play. “There she was, always in the stands cheering me on,” he says.

In 1975, Spencer got a master’s in education, and was drafted by the Minnesota Vikings. After a short time, he decided football wasn’t for him and came back to Utah with his family, then worked as a regional manager for Xerox for 11 years.

In 1991, Spencer returned to education, first working for a year as a substitute teacher at West Lake Junior High, teaching health. All the teachers were white, he recalls, as were 90 percent of the students. That same year, his mother moved to Utah to be near him.

After securing his administrative endorsement, Spencer was assigned as vice principal at a junior high, then held the same position at Skyline High School and Hunter High School.

In 2001, his mother, diagnosed with Alzheimer’s, moved into a nursing home in Sandy. Every Saturday, Spencer, who’s divorced with grown children, would pick her up and take her to a movie. On Sunday morning, he’d take her to their Baptist church. After service, they would have brunch at Market Street Grill.

In November 2008, Spencer, then vice principal at Hunter High, unsuccessfully applied to be principal of any available Granite District high school. The following year, he again threw his hat into the ring. A district official had told him, he recalls, “when we place principals, it’s got to be the right fit.”

In April 2010, Spencer was named West Lake Junior High’s principal. He resolved to “make West Lake the best it’s ever been.” Being a principal of color, he says, there was so much that was personally at stake for him—not only providing a role model for children at the school, but also for minorities in education. “I just hope to be successful so other minorities would also venture to be administrators.”

Spencer wants “every kid at West Lake to have the same opportunities my kids have had,” he says. His two daughters are senior doctors at major California medical establishments, while his son has his own insurance agency.

Clyde Walker, the father of West Lake eighth-grader Andre, says that Spencer’s upbringing in the infamously gang- dominated Compton means “he knows what he’s dealing with. If you’ve never been there, then nothing can tell you about these kids.”

Spencer, Walker adds, is determined more than anything, “that not one of these kids be left behind.”