A Lesson in Change

“I CAN’T DO IT ALL”
In the second year, when Spencer introduced the block schedule, it did not go smoothly. “There were tons of changes that would about break anybody,” Bartholomew says.

Communication issues with administration and lack of trust led to low morale and what a University of Utah Educational Policy Center report termed “a strained school climate.” According to the report, teachers witnessed colleagues in the halls “crying and saying, ‘I can’t do it all. You know, I don’t have enough time in a day.’ ”

Spencer’s lowest point, he says, came in November 2011, when some staff members wrote to the district complaining about him. The Granite School District denied a records request by City Weekly for the letter, a spokesman stating, “we have been unable to locate the specified record.”

The thrust of the letter, Spencer recalls, was that “the faculty viewed me as being negative, dogmatic.” What wasn’t mentioned, he says, “was how I was trying for those kids.”

Teachers acknowledge there was a group within the faculty who wanted Spencer gone. “I think you’d be surprised that some of those same folk have been very anxious to get rid of every principal who’s been at that school,” Fraser says dryly.

One month later, another letter, dated Dec. 2, 2011, was sent to the district by Leticia Medina, a former state Hispanic Affairs director. Medina had faculty, rather than administration, in her sights.

She noted in the letter, accessed via a records request, that at parent-teacher conference nights, some teachers made comments “that Latino parents don’t care about education, so why waste resources on them.” Such comments make Medina bristle. “Very few parents I’ve met don’t want their kids to get an education.” 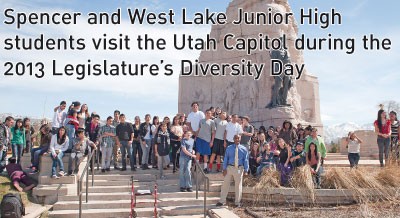 Until Spencer was brought in as principal, Medina wrote, the school’s administration did not reflect the community it serves. Latino parents told Medina, she wrote, that under Spencer’s leadership, “they have felt and seen changes.” No longer, for example, were they ignored in the front office if they spoke Spanish. In his second year, he re-opened the school’s family center, hiring a University of Utah doctoral student to spearhead outreach to Latino parents. Parents, their children and teachers collaborated on a community garden.

Spencer also introduced 20 Title 1 grant-funded para-professionals or classroom aides, many of them Latino, to provide both help to teachers and role models for the students. While the district’s list of approved teachers he could hire rarely offered professionals of color, through the aides, which also included former students, Spencer was finally able to reflect the diversity in his student body.

GAME’S NOT OVER
In January 2012, Fraser had an independent consultancy survey the faculty.

Spencer felt that Fraser’s decision gave credence to the complaints in the letter his staff had written. “I couldn’t see how there would be any difference [between the letter the staff wrote and the survey’s results], since the people who wrote the letter were also being surveyed.”

Instructed by the district to improve his relationship with the faculty, Spencer had the teachers come to his office individually and discuss his performance. “My idea was, ‘Tell me whatever you feel about me,’ ” he says. “ ‘I’m a big boy, say what you feel. I just want to get better.’ ”

By the end of March 2012, teachers who had been ready to quit just four months before were excited by the changes. One wrote on an evaluation of Spencer’s communication abilities, “Is this the same person that was principal a year ago? Glad I’ve stuck w/it here—huge strides are being made. J ”

In April 2012, it was time for the school’s CRTs. Spencer told the students at an assembly, “The most important thing to me is you know how to read, write and be able to count your money. Once you got those capabilities, you are able to do everything else.”

That summer, Spencer began receiving calls from the district telling him how well West Lake had done. The district told him West Lake had gone from one of the worst schools “to the most proficient school in the whole district.”

Spencer had cake and ice cream brought to the library when he unveiled the results to the faculty. The teachers gave each other high fives, as one category after another— language arts, science, math—showed increases year over year.

Spencer took the results in stride. “I’ve been an athlete so long, I know the game’s not over, there’s another getting ready to happen.” He told the faculty, “We need to continue our focus, we need people to understand it’s not a fluke.”

A HOME AWAY FROM HOME
Spencer’s mission will not be complete, he says, until he’s no longer asking the children at his school if they have considered going to college, but rather asks, “What do you want to do when you go to college?”

Part of that drive included taking students to the U on an icy day in January 2013 to walk the campus and see the Rev. Jesse Jackson’s keynote speech during Martin Luther King Jr. Week.

The day before the field trip, Spencer’s beloved 79-year-old mother died. He attended Jackson’s presentation, but it was as if the energetic 61-year-old had aged decades over night.

Despite such a devastating loss, Spencer says, the children’s passion uplifted him. “The thing I remember most,” he says, is his students standing up as Jackson urged all of them to their feet and told them to repeat what he said. “I am somebody,” Jackson cried out. “I am somebody,” the students roared back. “I will achieve, I am somebody.” Again the students echoed his call.

Two months after Anna Spencer’s death, her son struggles with his loss. “It’s hard, so hard,” he whispers, wiping tears from his eyes. “Me and her was always together. I never thought I’d be without her.” His daughters organized the funeral and asked that mourners donate money to the school in lieu of flowers.

Spencer’s mother visited West Lake once. “These kids need you,” he recalls her telling him. “Of all my kids you’ve done the most. You need to make sure they know your story. If they do, they’ll do better.”

Front-office staff say that when Spencer has to leave the school for meetings at the district or elsewhere, students know he’s not around. When he returns, “there’s a calmness,” several report.

Whether he’s behind his desk listening to both sides of a student fight, in the hallway swapping jokes or cajoling students who are late, in the cafeteria letting out a piercing whistle at someone to get off a table, or admiring the homework of a boy who comes up to tell him how well he’s doing, Spencer seems like the anchor around which the school’s pulsing life flows. He seems to know every back story, recognize every face. Indeed, sometimes it seems that when he exhales, so does the school. It’s his home, and these beaming faces, bright voices and extraordinary lives that flood by him between classes are all his children.

In Spencer, Andre Walker finds a powerful example. “We’re not different from anybody else,” he says. “He shows if he can do it, why can’t I?” 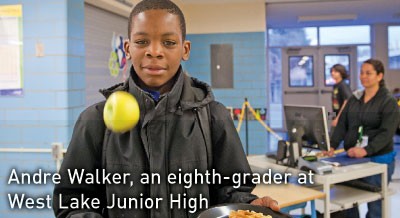 Seemingly, the only cloud on the horizon is that next year, because the district is moving West Lake’s ninth grade to nearby Granger High School, Andre won’t have another year at West Lake.

“I wish he didn’t have to leave,” Clyde says. “He has got the best grades since he’s been in West Lake.” Andre agrees. “I’m two grades away from being straight A’s,” he says proudly.

One teacher told the U’s Education Policy Center appraisers that despite his or her “personal beefs,” the school’s performance under the most trying of circumstances had amazed him. He concluded, “I think we’re going there, it’s just not easy.”

While some of the naysayers in West Lake’s faculty are expected to move to Granger to teach ninth grade there, a few of the teachers who think Spencer’s changes in communication style are, as one teacher put it, “too little, too late,” will remain. But most teachers City Weekly talked to hoped for a more cohesive faculty and administration in the next academic year.

At a recent faculty meeting, Bartholomew had teachers write down on a Post-it note one thing that frustrated them, then had them throw it away. “We need to move forward for the kids,” she told them. What she sees now, she says, “is a desire to be the best, to have kids be proud they go to West Lake.”

Title 1 specialist Morton agrees. Teachers have worked hard, she says, “they are turning it around, they are getting it.”

Spencer never doubted the school could be turned around. “I knew when we started teaching the way kids learn, they would pick it up,” he says. He knows he has many teachers who truly care for their students. “One thing I know about kids,” he says. “They’ll do anything you want them to do if they know you care about them.”