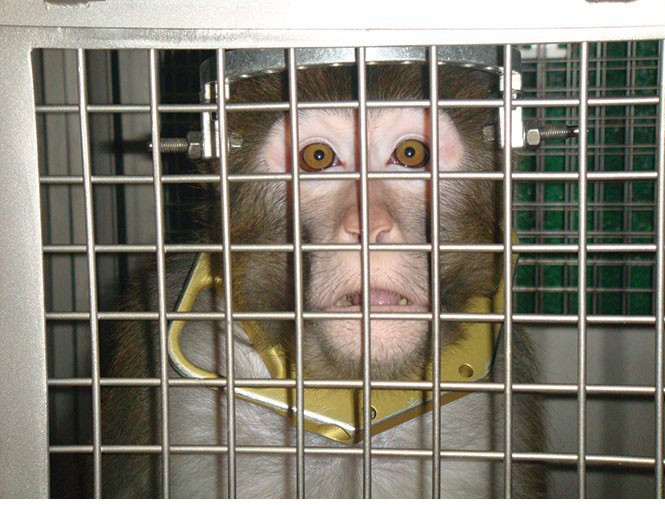 The story was made for television: A University of Utah research laboratory is performing tests on monkeys. A dose of anesthesia is given to a monkey so it can undergo a CT scan. The monkey's body gets dangerously cold, and someone in the laboratory uses a special heater to warm the animal up. But instead, the animal is burned and, to halt its suffering, euthanized.

These are the nuts and bolts of a news story that aired Wednesday, June 1 on Fox 13, but was later scrubbed from its website and social media pages.

Animal rights activists began drawing attention to the monkey, which died in August 2015, after the U.S. Department of Agriculture issued a report in May 2016 that documented "failure of appropriate communication and oversight" by the university's veterinary staff.

The Salt Lake Tribune wrote a story, and Fox 13 reporter Kiersten Nuñez put her piece together. But university officials felt the television story contained inaccuracies and also failed to give them the chance to respond to animal rights activists, who characterized the incident as "extreme negligence."

With stories about the controversial practice of animal testing disappearing from the internet, Jeremy Beckham, the vivisection issues coordinator at the Utah Animal Rights Coalition, says the scenario strikes him as "borderline Orwellian."

"It's like you want the public to forget it even happened," Beckham says. "Just deleting the whole thing is wildly irresponsible."

Before the story could be removed, Beckham says it had been shared more than 1,000 times on Facebook and had garnered hundreds of comments.

Kathy Wilets, the University of Utah's director of media relations, says that while she asked Fox 13 news executives to meet with her to discuss the school's concerns with the story, she never asked for it to be removed. "I'm not trying to block any sort of reporting," Wilets says. "We're a university and there are groups out there who are watching what we're doing, as they should. I just want to make sure that if others speak out on it that we at least have an opportunity to respond to what they're saying."

Wilets says Fox reporter Nuñez reached out to her and asked for an on-camera interview. But Wilets couldn't make the interview that day, and a written statement was given to the news station.

Beckham, on the other hand, did make the interview, and the story, he says, understandably focused in on his points of view.

"This reporter, from my understanding, gave the University of Utah ample opportunity to provide someone for comment," Beckham says. "If they don't do that, then I really don't think they can complain that their viewpoint wasn't in the story."

In an email, Tribune spokesperson Jessica Bellucci wrote: "The story didn't meet the station's journalistic standards (and didn't present both sides of the story) thus it was decided the piece would be pulled from the site."

Nuñez declined to comment, also referring any questions to the Tribune Company.

While the saga of the disappearing story itself has intrigue, the University of Utah's long history with animal testing laboratories remains controversial, and, in the eyes of activists like Beckham, is downright cruel.

But for scientists and doctors at the school, animal testing, they say, has provided a key bridge between a good chunk of modern scientific and medicinal breakthroughs.

The university's attending veterinarian, who helps ensure that animals undergoing testing are being treated humanely, says that while all research projects are not "Disneyesque," they are a far cry from torture.

"Many of the animals that are kept as pets have much tougher lives than the animals we care for here," says the veterinarian, who, citing security concerns, asked that his name be withheld. "The image of research animals that are undergoing significant torture and distress is false and we make sure that that's not the case."

The monkey was injured while undergoing tests on a genetic disorder present in some children that impacts certain regions of the brain.

The University of Utah receives millions of dollars each year for projects that involve animal testing. This particular study, the school's veterinarian says, involved funding from the National Institutes of Health. Beckham says more than $5 million has been spent on the study involving the monkey.

The National Science Foundation also contributes large sums of money to the university for a wide range of studies, including some on animals. One study, which commenced on Sept. 1, 2015, was for $925,000. By using something called computational cannula microscopy, the study aims to take brain scans of "awake, freely moving animals in unprecedented spatial resolution."

While university officials say animal research is important, Beckham disagrees. And he says that, specifically with monkeys, there is no humane way to keep them stored away in confinement.

"What you see in laboratories all over the world when you put monkeys in this type of environment, they start to exhibit several signs of mental distress, mental illness," Beckham says.

Monkeys, he says, have been known to bite themselves as they go "mad from this type of environment."

"This is all, I think, hideously unethical," Beckham says. "I don't think it's giving us scientifically valuable information."

One of Wilets' problems with the Fox 13 story was the use of a picture that shows a monkey in a cage with some sort of device screwed onto its head.

Beckham, though, says the picture, of a monkey named Frik, provided by the group People for the Ethical Treatment of Animals (PETA), was taken in 2009 at the University of Utah by a PETA field observer.

A PETA official in Washington D.C. confirmed that the photo was taken inside a U of U laboratory.

What Wilets and the veterinarian want the public to understand is that the school does what it can to ensure the safety and welfare of the myriad animals it uses for testing.

"I think, obviously, animal research is a controversial subject, but the reality is just about every medical advance we've enjoyed as a society and as veterinarians to treat patients has come, one way or another, from animal research," the veterinarian says.

But on the other side of the testing debate, Beckham says he'd like Utahns to know that a monkey was put to sleep, its temperature wasn't properly monitored and then it was burned severely enough that university officials thought it best to kill the animal.

And as for the Fox 13 news story, which seems to have succeeded in evaporating from the internet, Beckham says that as he sees it, the story was "pretty much entirely accurate."