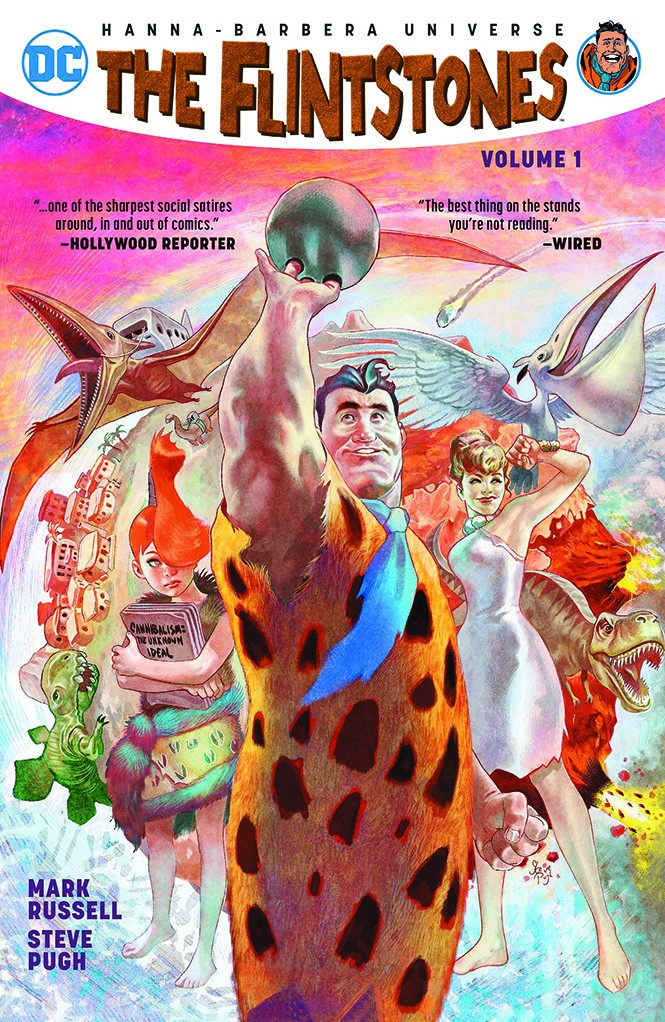 The year is 2017, and there are a lot of things I never thought I'd have to say—like "President Trump" or "There's a new Star Wars movie this year, too?" But what I'm having the hardest time wrapping my head around is the amount of time I've spent telling people they need to read the comic book adaptation of The Flintstones.

I know; I'm just as surprised as you are. I never thought I'd be writing this, but you need to read it. Why? Because it's like nothing you would expect, but simultaneously everything you'd expect.

Written by Mark Russell and brought to life by artist Steven Pugh, The Flintstones was relaunched last year by DC Comics. The first trade paperback collection just came out—representing issues 1-6. Yes, you get all of the bad "rock" puns you can shake a Neanderthal's fist at, but you also get some fascinating and biting social commentary. This version of the Flintstones' story shows the town of Bedrock as the foundation of all civilization. They're making all the mistakes one would make in forming the first civilization, and the writer and artist are able to inform us about our current society as well.

For instance, marriage equality. Back in the time of cavemen like Fred Flintstone and Barney Rubble, sex caves were the preferred order of things. Monogamous marriage was a bridge too far. Fred and Wilma end up at a couples retreat at one point, and it's invaded by protesters screaming about how unnatural their union is. War and the treatment of veterans are topics, too. Before the town of Bedrock can come into existence, Fred, Barney and the rest of their friends are sent to war against the Tree People. The Water Buffalo lodge is no longer just a troupe of bowling buddies, but a veteran's support group that helps Fred through his PTSD and existential crises.

No issue is off-limits for the creative team. One of the more poignant storylines takes us behind the curtains of consumerism. In the classic cartoon, every standard kitchen appliance or bit of technology is actually a prehistoric animal that sits in a closet when not in use. The cave people of Bedrock don't regard the lives of animals as worth anything beyond their utility, but as an audience we catch glimpses into their inner lives. In one of the best scenes in the first collection, we're given a beautifully colored look inside a closet where the armadillo bowling ball and baby-elephant vacuum cleaner ponder the nature of their lives and what their purpose really is. Is friendship a possibility between objects? Are they objects? Should we be thinking more about the lives we're affecting when we buy cheap appliances? Are the people who made them sitting in quiet closets debating their own slave wages and pondering their existence?

The series is a poignant slice of social commentary, and every issue in the collection forces the reader to think about the world around them. But it doesn't miss any of the playfulness of the original cartoon, either. It references just enough to keep fans interested, jabs at the years of Flintstones commercialism (including the vitamins), but it dives so deep that any reader even half-interested in philosophy will come back again and again.

Like I said, I never thought I'd be telling you this now, but here we are. While the trade paperback collects the first six issues, the series is scheduled to continue until Issue 12. You can get it at any of the fine comic shops in the area, and it'll have you saying "Yabba-dabba-damn, that was good."