A River Runs Through Him 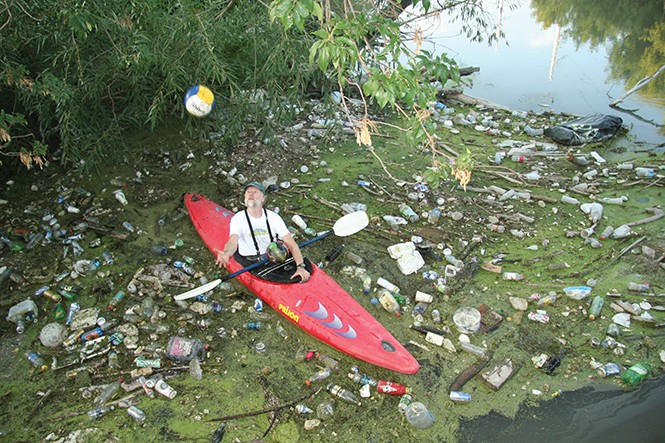 On a late autumn afternoon, the silty stream is still low, a stark contrast to the surging waterway Wheeler's photographs depict from more than 30 years ago. The colossal flood of '83 transformed State Street into a Venetian mobilized citizens with sandbags and sent Wheeler on a funky river adventure through pockets of nature hidden in Salt Lake County's backyard.

That year, while the city constructed wooden walkway bridges so residents could cross streets without getting wet, Wheeler hopped right in and embarked on a 150-mile, 10-day journey up the river. What he learned on his odyssey planted the seeds of a decades-long conservation mission.

The Jordan River begins in the fresh water of Utah Lake. It's fed along its route by canyon creeks and finally empties into the Great Salt Lake. Wheeler mapped out his itinerary, starting in Utah County. He would paddle from the northern edge of Utah Lake, cross over into the Salt Lake Valley, continue along an arm of the GSL's eastern shore, pass Antelope Island and go further onto wetlands near the mouth of the Bear River.

What he saw, he says, was stunning. He floated through flooded homes, under near-inundated bridges, past waterlogged factories and collapsing railroad bridges—all damaged by the great flood. First lesson: Sooner or later, the area will flood again. Floodplains aren't features that need to be conquered, he concludes, but rather respected as elemental parts of a larger river system where native plants thrive.

"Floodplains are designed by floods, not as platforms for an extremely risky expansion of industrial civilization, but to accommodate floodwater," he says. "They serve many different valuable ecological purposes and should be respected and preserved for their awesome biological vitality."

But his voyage led him to another poignant discovery—an unforeseen "beauty of the river where it hasn't been developed."

In one picture, Wheeler's kayak cuts through the water beneath a canopy of trees that line the river banks, their branches bending together to form a green archway. "The trees had knit together over the top of the river," he says. "Squirrels would run across these sky bridges. It was really cool and it really surprised me."

Surprised him, in part, because the terrain was wild, and yet, so close to the urban sprawl that has filled in much of the valley.

It was in untrammeled nature where he found an abundance of wildlife, particularly migratory birds. Already the river was commonly viewed as a polluted conduit that flushed sediment and industrial runoff to the Great Salt Lake. But he saw an ecosystem of wetland habitat where waterfowl made their rookeries in the marshes.

The experience stuck with him.

In an age when it feels like every square-foot of land is claimed, Wheeler has managed to pinpoint 17 areas along the Jordan River corridor that could—with a bit of planning—be preserved as a linear nature park system. He calls it Nature in the City—a riparian restoration master plan.

The spots he's identified differ in size and shape. The largest top 150 acres while the smallest are just a few. Common to all is an emphasis on native vegetation. The funding estimation or mechanism isn't clear, but Wheeler posits a mixture of public dollars and private donations.

Wheeler is a resident of the Glendale neighborhood, an activist of sorts, a retired space planner at the University of Utah and a kayaker. What he's not is a politician. So he's spent the past few months pitching his idea to communities along the river with the aim of getting a large enough buy-in that elected city officials will see its value and push for implementation.

The Glendale Community Council was one of the earliest supporters. Chairman Sean Crossland says the concept was received with near-unanimous support in his community.

"I think it's ambitious but necessary," he says. "We need to think a little different about development and prioritizing conservation and nature in a proactive way."

Beyond the inherent appeal of natural spaces, Wheeler has compiled a list of selling points, contending that nature parks bring social, environmental and economic benefits. Because the proposed reserves are near the Jordan River Parkway Trail, for example, they could be used to promote and connect bike routes for recreation and commuting, thereby cutting back on greenhouse gas-emitting traffic.

"It allows people to explore the river corridor in a really nice way on an off-street bike trail that goes winding through all of this scenery. But, in addition, it provides a really efficient bike commuting corridor," he says.

The natural spaces would make for exceptional hands-on classrooms within walking distance of many local elementary and middle schools, he continues.

Two of the 17 proposed segments are existing golf courses. In 2015, the city found itself wondering what to do about some of its golf and toyed with the idea of shutting a few down on the assumption that it would save taxpayer dollars.

Building on that idea, Nature in the City looks to convert a couple westside courses into public nature spaces. Wheeler envisions the Glendale course, for example, could be relandscaped into a place with a multitude of community and recreational opportunities.

"What we proposed was take the core golf course and make a large nature park with a community fishery, and then around the perimeter do some of the things that the public has identified that they want, like a bike pump track, an urban agriculture area of 9 acres, a Frisbee golf course, a boat dock for sculling, etc.," he says.

So far, Nature in the City is backed by more than 15 national, regional and local conservation groups, including the Sierra Club and Utah Rivers Council. It's also gaining allies in westside community councils, such as Westpointe.

Dorothy Owen sits on the council for Westpointe, a neighborhood that extends from the northern and western city limits to roughly Redwood Road and down to 700 North. Council members favored the concept of Nature in the City and voted to send a letter of recommendation to Salt Lake City. But that's not to say the measure passed without reservation.

"Westpointe really loves our Rose Park golf course," Owen says. "We didn't want anyone to think that, because we support Nature in the City, that we were the golf course."

As she sees it, the choice isn't binary. And the entire plan doesn't have to be scrapped because a small portion isn't to her neighborhood's liking.

"The nice thing about Nature in the City is it's a commitment to principles and values about how you want land developed," Owen says. "Certainly, as you go along, you have to deal with each individual parcel. It's all about getting ahead of the pressure of economic development. We know what our vision is to make this a better neighborhood."

An anchor for the community, the Glendale golf course has been a 50-year landmark that now annually generates around $1 million, Dent says. He also rebuffs the claim that golf in the city is a monetary sinkhole, saying the courses' greens fees generate more cash citywide than the operating costs.

Replacing the Glendale course with a public amenity would be an enormous cost, he argues, and would likely be met with from the community members who enjoy the sport.

But like Owen, Dent doesn't think golf enthusiasts and those who prefer nature reserves need to be at odds with one another. He welcomes the idea of beautifying the areas around the golf course.

"They can coexist," he says.

Most of the proposed land is not on a golf course. Wheeler says Nature in the City offers a land-use plan if courses are closed. "We have broad principles. This is what you would do if you could—if funding were if were available."