A Stroll Through the Avenues 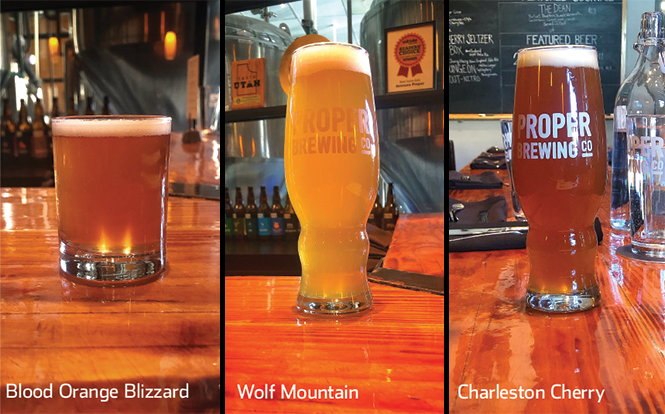 With all of the breweries popping up downtown, it's easy to forget about the fringe brewhouses in the city. Avenues Proper's location tends to get the gastro-brewpub overlooked. Luckily, their unique beers can light the way.

Blood Orange Blizzard: Upon first whiff, I get blood orange, more Creamsicle-like than I expected. Some sweet cake-like malts follow, along with a nice dose of piney hop aromas. The orange definitely takes the lead, but if you allow your sniffer to hover above the foam long enough, the hop selection becomes more evident, adding some floral notes. The first swig delivers the juicy blood orange and its pithy peel, plus more Creamsicle and some piney hops. The malts are more subtle here than they are in the nose, keeping the citrus parts from becoming too overwhelming. On the back end, I get biscuit with a floral and pine hop blend. The finish is dry for the most part, with some tangy citrus lighting up the sides of the tongue.

Overall: This beer excels at punching up the citrus aspects while keeping some remnants of the beer's base intact. It's not perfect by any means, but the citrus has a way of keeping the palate interested in the next sip.

Wolf Mountain: The body has a much darker amber quality than you're probably used to seeing. There's a pleasantly hoppy aroma backed by some mineral-forward caramel malts. However, it's the salad of hops that dominates—big floral, herbal, pine and citrus. As usual, the flavor follows suit with boldness all around: hops, malt, bitterness. It offers a dry, bitter finish with lingering leafy, herbal, spicy and somewhat grassy hops. This is not for the timid ale drinkers. Although the caramel maltiness and yeast choice seem English in nature, the hops are mostly American, with an in-your-face bitter punch that reminds you of what IPAs used to be like decades ago. As it warms, it becomes much more rounded and balanced.

Overall: I don't think this beer was intended to be as bitter as it came out. You can tell there's more citrus qualities that want to be present, but the bittering hops became just too overwhelming. Still, in a world that seems to shunning bitter ales, it's refreshing to have a hop-forward beer that seems much more adult.

Charleston Cherry: It pours a deep ruby red, not perfectly clear, but with no sediment either. The aroma is strong with cherries, almost medicinal, but fresh at the same time. They must have used an absolute ton of them. I smell the funk from the yeast Brettanomyces as well; it has that unmistaken musty barn heaviness. The caramel and vanilla notes play wonderfully with all that cherry. Normally, I'd go off on its Belgian-like qualities, but I don't really get that at all. Tastewise, this is a fruit-driven beer that showcases the cherry and less of the funk. I've had a previous version of this beer that was by far more yeast driven, and I can see that this was designed for a broader appeal.

Overall: Most of the sweetness seems to be from the cherry, not the grain. It's more sour and funky than it is Belgian, but I suppose both elements are there, and the combination is nice. This is one of the few Brettanomyces beers you'll find on draft in Utah.

Although Avenues Proper is part of Proper Brewing Co., it makes its own unique beers that are exclusive to its location (376 E. 8th Ave.), on top of Proper's entire line of packaged beers. It's definitely worth your time and sheckles. As always, cheers!