A Tart Start to Summer 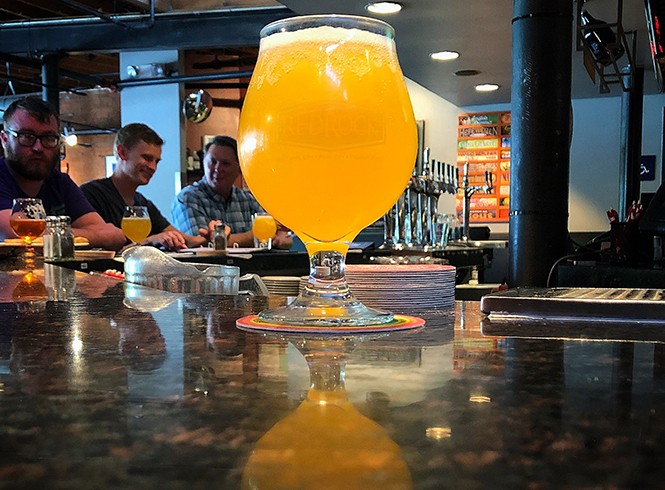 In case you missed it, summer is here. If the temperatures outside aren't a dead giveaway, the seasonal beer selection in the grocery stores should be. Damn near every beer on the shelf skews toward the lighter end of the spectrum; right now, the thirst quenchers reign supreme. What used to qualify as a quenching beer, however, has undergone a bit of a change in the past few years. It once was about Pilsners and wheat beers. Now, sour and tart brews are beginning to take more of the warm-weather market share. You wouldn't think tart beers would be seasonally appropriate, but consider them in the same vein as lemonade, and it all becomes clear. Tart/sour flavors stimulate salivation more than any other taste. Like lemonade, acidic beers wet the mouth and give the impression of hydration even after your tangy beverage is finished. Add the stylistic low alcohol from these beers, and voilá: You have the perfect adult thirst quencher. There are quite a few Berliner weisse and Gose style beers in the market, and here are a couple of my recent favorites.

Zion Canyon Strawberry Rhubarb: This beer looks like rose stained glass in the chalice, with a Champagne-esque white head. The nose is very natural; it's sweet strawberry, for sure, but not sugary, balanced in its aroma by piquant rhubarb. Think jam or pie filling. I've had a few other beers claiming to bear strawberry/rhubarb flavor, but this one really nails it. The flavor starts sharply acidic, with bright and flavorful strawberry giving way to a dose of herbaceous and tangy rhubarb. The wheat malt body is prevalent, but only makes its presence known after the other flavors have their time on the palate. I prefer flavored sours to be built this way, to be honest, because it allows the full flavor of whatever was added to have a bigger focus on the tongue, before the cereal-like grain note takes over. The finish is somewhat acidic, as well, with some sharp lemony bite and brighter citrus notes combining with a heady, yogurt-like tang thanks to the lactobacillus enzymes.

Overall: This 4 percent ABV beer delivers exactly what it's advertising. You get the fruit/field flavors that you expect, with a pleasant tangy base. Trust me, you want this.

Red Rock Mango Berliner: Pouring a slightly hazy/cloudy pale straw/yellow color (pictured), it's got a respectable one to two fingers of fairly dense and rocky white head with great retention. The nose has light lemon, mango and melon, with notes of grass. Mango aromatics aren't as pungent as some fruits, but you still manage to identify the fruit in all the tartness. The aroma sets things up pretty well, so you're not in complete shock when the tartness hits. Upon first swig, you get lemon and lactic tart/sourness along with some hints of cereal grains. A light unripened mango fruit tang begins to emerge from behind, adding a tad of sweetness to cut the pH levels. Lingering notes of lightly tart lime, apple and white grape round out the end. Some puckering keeps your lips smacking in the finish.

Overall: You'll get zero warming alcohol, as expected of this 4 percent ale. I think you'll find this to be a nice fruited Berliner weisse with good drinkability and moderate complexity.

You can snag both of these beers at their respective brew pubs. In addition, downtown Salt Lake City's Beer Bar has made a deal with Zion Canyon to sell drafts out of their pub. Don't procrastinate, since these won't be around forever.