A Visit to Funky Town 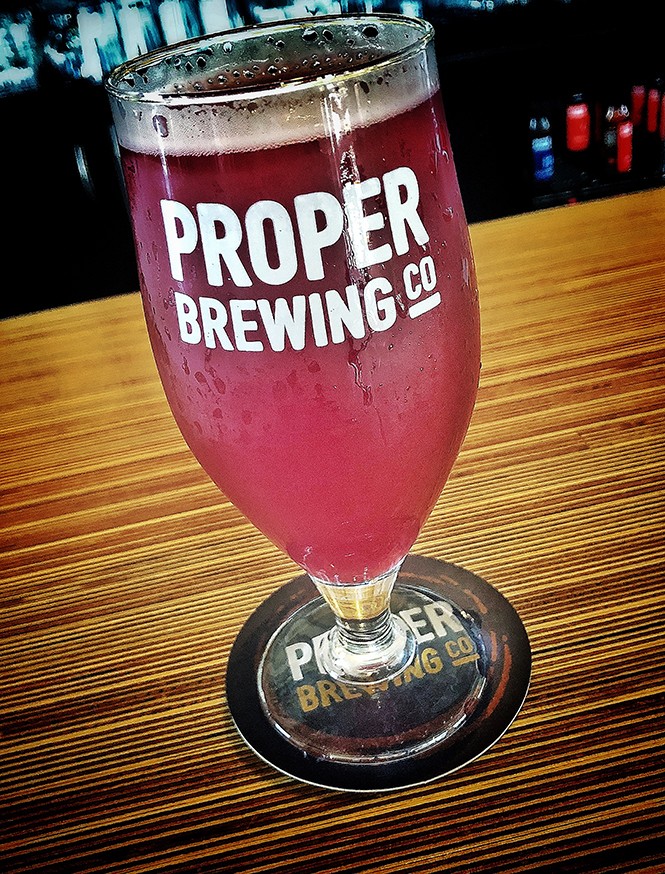 Every region of the world has beers that are unique to it. We're very familiar with German lagers and English ales, but I think the world's most unique-tasting beers come from Belgium. These beers have a style all their own, which comes down to the yeast. In general, the palates are described as funky, full of flavors that are reminiscent of clove, dough and bubblegum. This week, I found two new Utah beers that couldn't be more different from each other, yet still scream, "I am Belgian!"

Proper Black and Blue Skittlebrau: This beer pours a somewhat hazy fuchsia color, with a loosely foamy cap of froth on top. The aroma is a nice medley of musty dark berries with some earthy yeastiness. The taste is pretty laid-back, with raspberry, blackberry and a minor mineral bite. The berries are far from sweet; fermentation has zapped a good deal of sugar, while keeping the fruity essence. Muddled funk (a great band name, by the way) and straight-up estery yeasty notes round out the palate, putting a nice big Belgian bow on this seasonal gift. The finish has a light flavor of earthy hops, which impart a little bitterness that doesn't linger at all.

Overall: This is a fairly enjoyable, complex and fruity version of the Saison beer style. It's easy to drink with a berry flavor and aroma that are assertive yet complimentary to the base Saison. This 4 percent ABV beer is limited and won't be available forever; everyone around me kept asking, "What's in your glass"? That should give you an idea of Black and Blue's trending status.

Shades of Pale Cerberus: It pours a ruby red color with nice crimson highlights when the sun shines through it. The head has a bit of eggshell color to it, which fades to a pocky ring around the glass. The nose starts off with a higher amount of sweetness, with the Belgian yeast being the first to show up as it conveys a typical estery Belgian yeast aroma. Dark fruit notes add a nice mix of raisins combined with bubblegum, caramel malts and a little bit of noticeable alcohol.

The taste seems to be pretty similar to the aroma, and it starts off with a lower level of sweetness as the yeast remains the first to show up. The same estery Belgian yeast punch appears a little more pronounced on the tongue than it does in the aroma. Up next, the dark fruit notes become more assertive, adding fig, raisin and plum to an already sugary malt base. The finish follows with more sweetness; there's hardly any bitterness, with more caramel coming through as a little bit of warming booze adds contrast.

Overall: I thought this was a pretty nice example of the style. Quads aren't for everyone, since they're generally pretty sweet and boozy, and rely quite a bit on the malts and yeast to provide balance—which, if not done correctly, can result in a cloying mess. The whopping 13 percent ABV (believe it or not) is pretty well hidden for such a high-octane beer. It disappeared from my glass much quicker than I anticipated.

These are just two of the many Belgian style options available from local breweries. If you ever find yourselves in a beer rut, consider looking at Saisons, dubbles, tripels, quads and others for a fresh perspective on what an Old-World beer can be. As always, cheers!