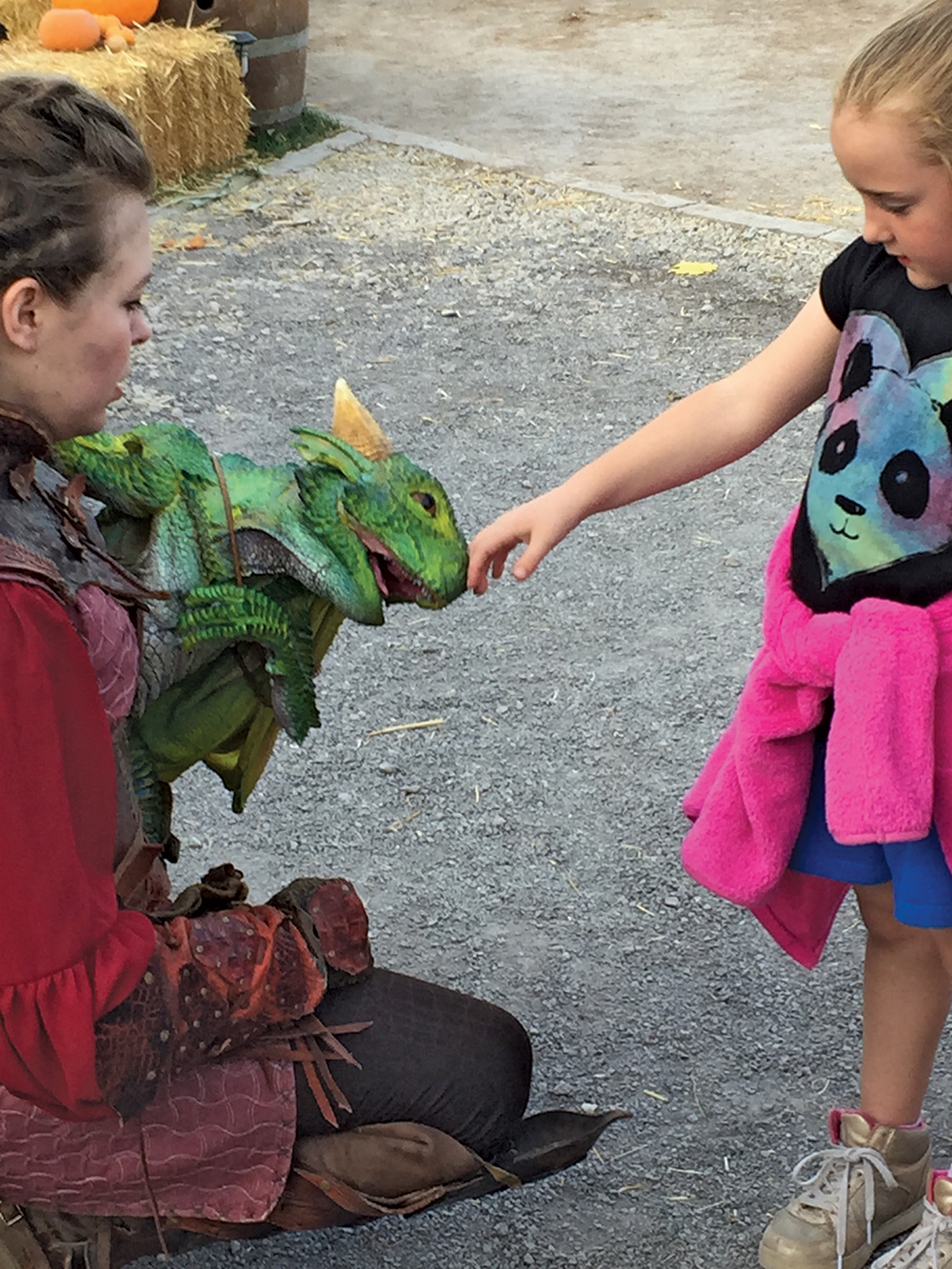 In this quaint, Old World village, faeries and goblins stroll among humans, and a fire imp sits trapped unhappily in a cage. Children pet a baby dragon, and ghosts haunt a churchyard. It's all in a mysterious, faraway place called ... Pleasant Grove.

On Sept. 29, Evermore Park celebrated its official ribbon-cutting, inviting visitors into a theme park that leaves rides and rollercoasters behind in favor of interactive theatricality. Guests become not just part of the detailed world of this village, but part of its story.

Evermore is the vision of founder and CEO Ken Bretschneider, financed almost entirely by himself and his wife from the millions he made selling his internet startup. It's a vision informed by a troubled childhood, one where he sought a refuge. "As a kid, I thought life was really bad, because I grew up in an abusive home," Bretschneider says, "so escapism was really important to me. I found solitude and meaning in those places. It shaped me [so] that in my adult life, I wanted to contribute and create those kinds of things."

That artistic, creative spirit took many forms over the years—including visual arts and video-game design—before Bretschneider made his fortune founding the online security company DigiCert. But the most direct progenitor to Evermore came when Bretschneider and his family began creating a seasonal haunted house out of their Lindon home. That experience became so popular that, by 2013—when it included a Victorian graveyard haunt in an adjoining field—they pulled in 11,000 visitors.

"When we hit this number of people, I said, 'We can't keep doing this,'" Bretschneider recalls. "So I stopped, but I got this idea of, 'You know what, I need to build this. I need a place where I can create these storytelling adventures.'"

To help realize his vision for a park that would revolve around a storytelling experience, Bretschneider found Chief Creative Officer Josh Shipley, a 21-year veteran of Walt Disney Imagineering. Shipley worked on Disney park experiences like the refurbishment of Great Moments with Mr. Lincoln, Hyperspace Mountain and the introduction of Marvel Comics characters to the theme parks. Yet at a time when Shipley and his wife were thinking about the empty-nest phase of their lives, it was exactly the ways that Evermore would be unlike Disneyland that he found appealing.

"What was being created here wasn't a theme park, but a theatrical environment," says Shipley, whose background is in theater. "I had asked Ken if he was going to be pursuing any [intellectual property], and almost apologetically, he told me no. He thought that would be bad for me. But that was actually the real hook. That's what I want to be in."

With Shipley on board, the Evermore creative team then set about assembling the physical "stage" for their adventures—an entire town with a tavern, mausoleum, an elven village and an encampment of itinerant vendors including fortune-tellers. That town would then be populated by actor-performed characters, allowing for either free-form interaction or a more structured quest-type adventure.

That unique design—one where the guests' own initiative becomes key in the kind of experience they will have—also becomes a challenge when guests might be used to theme parks where experiences like rides are uniform and consistent every time. "Now that we are open, and we have people coming in and consuming what we put out for them, are we asking them to drink from a firehose?" Shipley wonders. "There are a lot of characters, a lot of quests, a lot of things you can chase after, and we take it for granted that we're connecting all these parts of the web in their brains. ... Literally every day, we're out there trying to figure out and adjust to feedback."

The ongoing process of improving the guest experience is only one part of the way Evermore will evolve on an almost daily basis. Some buildings on the property remain to be completed, and Bretschneider describes an expansive vision for a clock tower, a manor house, an armory and other future components of this world. Story experiences are expected to change with the seasons, from the current Halloween-themed Lore offering to other tales that will be more appropriate for the winter holidays, or for spring. Shipley even notes that the cast members have begun recognizing return visitors, turning guests' specific experience in the park into something that can be carried over into subsequent visits.

It's understandable, then, that after five years developing Evermore, Bretschneider isn't ready yet to do a victory lap. "I've sunk $31 million of my own money into this, because it's that important to me," he says. "It has a lot more meaning than just a business.

"At our first party, I talked to almost every person, and 98, 99 percent were having a blast. But a couple of people weren't happy, and being the ultimate perfectionist, maybe obsessive, I go into the mode of thinking, 'How can I do this better? What things can we do within this world we created, because we made a commitment to this world, this stage? What do I do next?'"