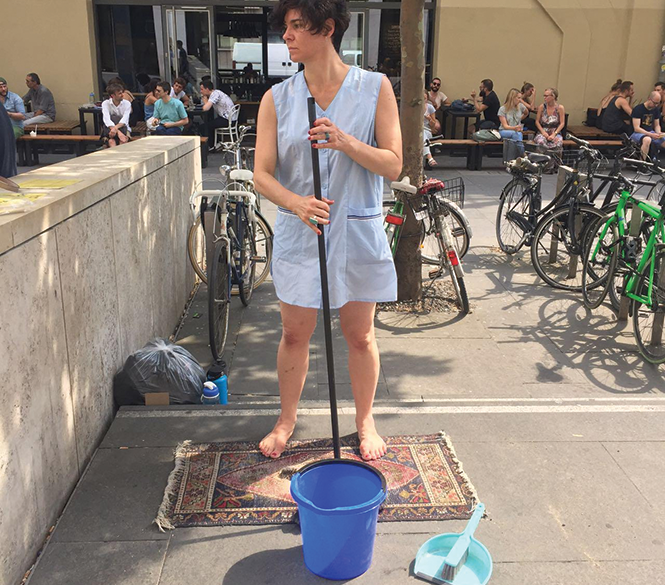 Michelle Standley knows that her performance art concept for 4.5 Hours is likely to provoke people. In fact, she knew it before she ever performed it.

During the piece—inspired by a study conducted by the Organization for Economic Co-operation and Development about daily unpaid domestic labor done by women, and which Standley performs at Temple Square this week—Standley sweeps a pile of dirt up on a rug, gathers it into a dustpan, dumps it into a bucket, then empties it onto the rug to start all over again. Repeatedly. For 4-1/2 hours.

Standley recalls one of the first times she mentioned the concept for 4.5 Hours to anyone, at a dinner gathering, and a close friend had an unexpected response. "She started laughing at the very idea of the piece," she says. "And made fun of me, in fact, in front of everybody."

That's the kind of reaction you have to expect when you're challenging orthodoxies, but that's something Standley has plenty of experience with. A scholar of modern European history, Standley was raised in The Church of Jesus Christ of Latter-day Saints in Southern California, and attended Brigham Young University-Hawaii and the BYU campus in Provo. Over the course of her academic studies, however, she began to realize that her study of history was making her question her beliefs. "I realized how ideas change," she says, "and things you think are solid are tied to a specific moment or culture. ... When I was finishing at Brigham Young, in my final course, there was a question, 'How did your study of history influence your thinking?' I wrote an essay on how it walked me right out of the church."

It also took her a while to find her way back to artistic expression as an adult, after being very artistic as a young child. Standley recalls that around puberty—and shortly after, when her mother passed away—"I lost my way. ... I think a part of me was buried in a way. Self-expression takes guts. For me now, pursuing the path of the Ph.D., then finishing it, kind of liberated me to be brave enough to say, 'These things don't have to be separate.' In fact, as a curious, creative person, it's really about embracing the world and finding different ways to communicate that excitement."

Most of that artistic expression for Standley has involved visual arts or video projects; 4.5 Hours is unique for her in being a piece of live performance art. Taking that risk involved baby steps, from the six years between her first inklings of the concept to performing it for the first time all alone, in an open field, in 2017. "I taught for 15 years as an adjunct professor, so I'd been 'on stage,'" she says. "But I don't particularly like it. I kind of can't wait to get off. So for me, this was kind of a bold move. ... Everyone responds to life and aging in different ways, but I think it's liberated me to take risks."

The second performance came last year at a colloquium, where she was invited to present a paper but offered instead to perform 4.5 Hours—which meant being in a place slightly more populated than an empty field. "I thought I was going to throw up," she says with a laugh. "But I feel quite strongly about it, and maybe this is something that comes from being raised Mormon, but I'm deeply sincere. When I believe in something, I really stand by it. And I believe in this thing I'm doing."

The Salt Lake City presentation of 4.5 Hours marks only the third-ever public performance, which Standley timed to coordinate with the LDS church General Conference weekend, before the planned four-year renovation of Temple Square. In her news release, Standley observes that she's aware of "the very gendered nature of the division of labor that characterizes most Mormon homes," and that the Sunday performance is a way of recognizing that the "day of rest" doesn't apply equally to everyone. Yet she's also careful to recognize the importance and value of labor, and that her solo performance is just one representation of the way it manifests itself—and perhaps also a recognition of the way she wishes most domestic labor didn't manifest itself.

"I wish there were more social solutions to these seemingly private problems," Standley says. "When I do this [performance], I'm alone. Tonight, I was in the kitchen with my son, doing the dishes and playing music, thinking about childhood growing up Mormon, and one of the great things that taught me was the joy of communal labor. Somebody has to do [domestic labor], it can't not be done, but wouldn't it be great if the labor was distributed more fairly, and if it was done together."