A Year of Living Virtuously

In 1726, when he was 20, Benjamin Franklin created a list of 13 virtues to live by in order to build his character, including sincerity, frugality and temperance. Although the idea of living virtuously seems archaic nowadays, Teresa Jordan took on the task of living by and noticing these virtues in her daily life. After crafting essays and meditations each week around her experiences with different virtues and vices, Jordan created a book of her experiences called A Year of Living Virtuously: Weekends Off. She'll be discussing her book at The King's English (1511 S. 1500 East, Salt Lake City, 801-484-9100, KingsEnglish.com) on Dec. 9 at 7 p.m.

How did you embark on this experiment of living virtuously?

Writing had been my life, but I really veered away for a few years. I went to art school at the University of Utah and I really just did visual art for some time. I was wanting to get back into writing seriously. I wanted to get my path set, like finger exercises for a pianist. I had just run across the autobiography of Benjamin Franklin, something I read probably in junior high. I was paging through it and found his list of 13 virtues. I've done a lot of teaching of writing and I use triggers to get my students free-writing and I'll throw out a trigger or an idea or a word and it will take them in unexpected ways. I thought I'd set up a series of exercises for myself, and that was a good list to start with. The first couple were really easy, and then it got more interesting and deeper. I really started thinking about these virtues because they certainly pay off in every single one of our lives all the time. I didn't start out thinking I was going to write a book—I thought it would be something on the side. But in the end it was quite absorbing. 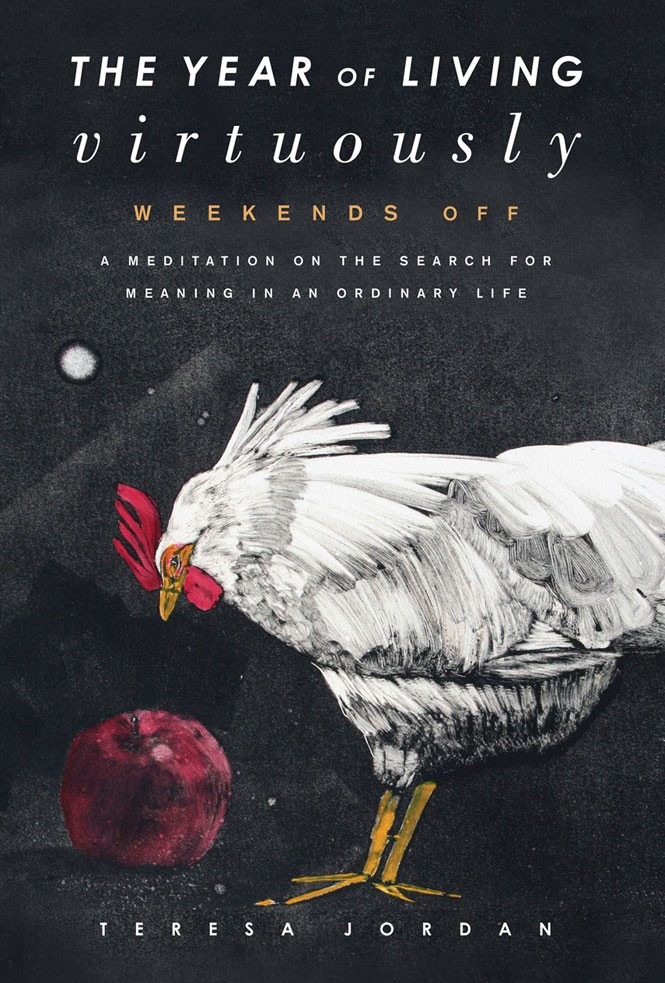 Do you still try to live by the 13 virtues?
I actually finished the experiment a couple of years ago, but it has made real and increasing changes in terms of my life. I have deepened my own spiritual practice because of this book. It's given me a much larger understanding of the degree to which most of us want to do the right thing, and all sorts of things get in the way. What I kept coming up against over and over was how our over-programmed, over-distracting lives interfere with our ability to get along with each other, to be tolerant of each other, or to even question our own motives and whether or not the way we're living our lives is in accordance with what we believe our deep-seated values are.

Were you trying to earn a halo by living virtuously for a year?

When Benjamin Franklin started this project, he titled it Virtuous Project for Moral Perfection. Trust me, I never thought I was going for moral perfection. I wanted to pay attention. I wanted to think about how virtues and vices play out in ordinary life. I've never had much truck or interest in righteousness. I think that the really big problems of the world often derive from someone thinking that they have a handle or that they have a corner on virtue or righteousness. Benjamin Franklin's virtues are tolerance, tranquility, moderation, humility, silence, order—they're things that, in the end, are suggesting a way of being like each other, listening to each other, respecting each other.

How do you suggest readers begin their journey to living virtuously?

I think many of us in our daily interactions will come back from an interaction that didn't go as well as we wish it had. Maybe we got short with our daughter, or a telemarketer called and we sounded so incredibly rude, or a misunderstanding with a friend. Those are real opportunities to get quiet, to ask ourselves what happened, why did we respond in that way, is that the core of the relationship that we want to have with this person, how do we repair it if we have damaged it or if we have in turn felt damaged?

We certainly see things play out on a huge stage, like scandals in Washington and the implosion of economic system and the extraordinary improprieties that were done on the highest level of finance that led to that, but virtue and vice play out in our lives in the most intimate, close ways.

Think about the Shakespearean tragedy King Lear. He didn't commit genocide, he wasn't a murderer. He was hungry for flattery from his daughters, he wouldn't listen to his best friend—these are things that happen over our dinner table every single night. That, to me, is the place where you start to look at virtue and vice. It's really easy to look at the world stage and judge, but I think a really good place to start is over the dinner table with that conversation that maybe didn't go very well.