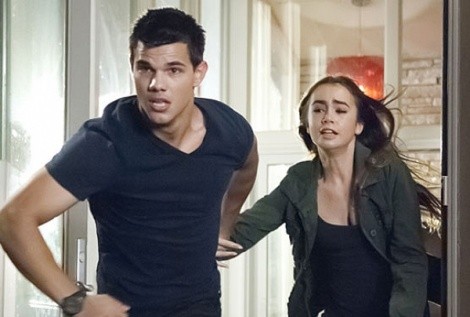 Abduction
When a guy who isn’t a dreamy werewolf (Taylor Lautner) begins to unravel the mystery of his real father, he’s targeted for death by werewolf hunters, er, assassins. Can he, his abs and his girl (Lily Collins) survive? Woof! (Lionsgate)

Dirty Girl
In yet more Searching for Daddy news: An Oklahoma girl (Juno Temple) road-trips to California, obligatory gay BFF in tow, to find her real father and—wait for it—herself. No werewolves or assassins. (The Weinstein Co.)

The Ides of March
A campaign press secretary (Ryan Gosling, in his 84th film role of 2011) becomes involved in a scandal that threatens the presidential candidacy of his boss (George Clooney). Also starring Philip Seymour Hoffman as the fat, wheezing guy. (Sony)

Killing Bono
A pair of Irish brothers (Ben Barnes and Robert Sheehan) form a band and fail to become rock stars as their schoolmates go on to become U2. Like the rest of the world, one brother becomes obsessed with murdering Capt. Doucheglasses. (Arc)