Thursday 5.14
ABSTRACT RUDE
Like Bloodshot, Sub Pop and Nonesuch, Rhymesayers is a name you can trust. The Minneapolis-based record label boasts a roster that’s consistently 99.9 percent dud-free. Its latest signee Abstract Rude shakes things up a bit by sounding … familiar. Where his labelmates are known for pushing the envelope and crossing over to near genre-less territory, Abstract Rude brings with him a traditional West Coast sound reflective of his many years in Los Angeles’ underground scene, particularly time clocked at the Good Life Café. On Rejuvenation, he drops a flow that’s deep and pleasing like Jurassic 5’s Chali 2na. Guest artists Gift of Gab, Myka 9Nine, Aceyalone and even comedian/lyrical chameleon Reggie Watts add to the appeal of the album which should be a part of your summer soundtrack.
Kilby Court, 741 S. 330 West, 7:30 p.m. All-ages. Info: KilbyCourt.com 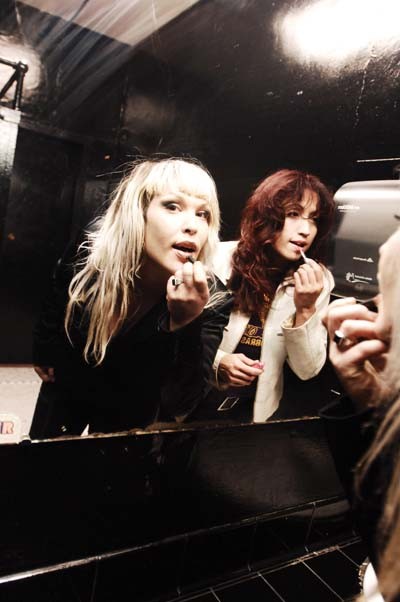 DETROIT COBRAS
Motor City rockers Rachel Nagy and Mary Ramirez are like Grease’s Rizzo—tough and sassy, cool as ice and fiery as all get out, completely comfortable in their own skin. As the pipes and pulse of Detroit Cobras, Nagy and Ramirez take a little of this, a little of that from the best classic garage rock, R&B, soul punk and country to unleash a familiar sound that’s no less tantalizing for its worn-in flavor. Nagy’s voice is powerful and deep, not quite gravely but still evidencing signs of lord knows how many cigarettes. In other words, her voice is real. So remember that quality if someone pans the Cobras’ Tied & True (Bloodshot) for being “just a covers album” the record is spit-shined and outfitted with giant brass knuckles. Irma Thomas and Betty Lavett would be proud. Stockard Channing too.
The Urban Lounge, 241 S. 500 East, 10 p.m. Tickets: 24Tix.com


Friday 5.15
SARA WATKINS
When John Paul Jones says, “If you make a solo record and I don’t produce

it, I’m not going to speak to you again,” you don’t just comply—you race to the studio before he changes his mind. The Led Zeppelin bassist helped convince Sara Watkins to get busy with her self-titled debut, an album she long considered making while playing in Nickel Creek. As one third of her family’s band, Watkins grew up onstage and in the studio, but until recently didn’t quite know how to break out on her own. The tremendous fiddle player with a heartbreaking soprano twang found her sea legs, so to speak, after gigging at Los Angeles’ Largo in a rather freestyle revue. Armed with new arrangements and a sense of purpose, Watkins joined Jones in the studio along with contributors including Jon Brion and Pete Thomas to record live in a cavernous room. The result is one of the best albums of 2009—a bright, solid work that while timeless should establish Watkins as the new face of bluegrass and oldtime music.
The State Room, 638 S. State, 8 p.m. Tickets: TheStateRoomSLC.com

Saturday 5.16
JEFF LINSKY, MICHAEL SPIRO
Jeff Whiteley, founder of the Excellence in Community concert series, always has his hands in something. This time around, Whiteley has cooked up a promising new project with Gordon Hanks of the widely lauded GAM Foundation that harkens back to the days when folks went out dancing— not clubbing, dancing. The gist—national artist performs with local artist (a population near and dear to Whiteley) in a cabaret setting. Audience members can sit and chillax or take a romantic, nostalgic turn on the dance floor. The GAM/ Excellence series kicks off tonight with classical guitarist Jeff Linsky and percussionist Michael Spiro. Linksy, a California native who spent his formative years with a guitar practically glued to his hands, has a smooth finger-picking style that on a recent track “Kalaupapa” tangos with the sound of gentle ocean waves. He describes his influences as “endless,” citing continued travels around the world and a home in the South of France.
Murray Theater, 4916 S. State, 7:30 p.m. Tickets: SmithsTix.com

Tuesday 5.19
MIKE WATT & THE MISSINGMEN
Mike Watt probably doesn’t have to tour the country in a van, but the legendary punk bassist prefers to “jam econo,” adhering to the DIY lifestyle that first helped a little band from San Pedro lasso a following that grows with every project he gets his hands on. “Watt is way into learning from doing w/others,” he writes on the Website of current collaborator Kaori Tsuchida. The pair teamed up with Tokyo group Two Lite for the Funanori EP Twofer, a wildly inventive and fun album that at moments recalls Cibo Matto’s high-pitched adventures. Watt swings into town tonight on the Prac’ n the 3rd Opera tour—his first road trip in five years following a steady gig with the Stooges—with road/band mates Raul Morales and Tom Watson. Stop in and say hello.
Bar Deluxe, 666 S. State, 10 p.m. Tickets: SmithsTix.com

Wednesday 5.20
MAGNOLIA ELECTRIC CO.
No one sounds quite like Jason Molina. His powerful, restrained voice drips with sorrow and beauty, carrying the weight of the world so you don’t have to. Molina, a prolific artist who has released around 20 full-length albums and Lord knows how many singles under his name, as Songs:Ohia and with Magnolia Electric Co. whose recording spree hit a six-year wall. Followers suffered some pretty severe withdrawal until the Secretly Canadian band came out with a blink-and-it’s-over 7-inch this year in honor of Record Store Day. The exclusive album is already out of print, but perhaps the thrill of bestowing new music upon hungry listeners got the blood stirring again. Fingers crossed for a forthcoming LP of more brooding, electrified folk/ Americana.
The Urban Lounge, 241 S. 500 East, 10 p.m. Tickets: 24Tix.com (with The Black Hens and Band of Annuals; also playing the Rim Rock Patio in Torrey, Utah, May 21)