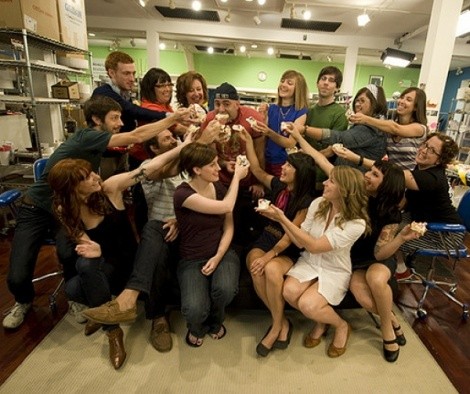 Season Premiere:
Not only the season premiere, but the 100th episode! Duff and the Charm City Cakes crew work on a roller-coaster confection and reflect on 99 previous installments of Ace of Cakes—not to be confused with TLC's unwatchable Cake Boss knockoff, or its slightly less-grating Ultimate Cake Off (once again, didn't TLC used to be The Learning Channel?). Anyway, back to Ace of Cakes: Elena, call me.

Series Finale:
The only Thursday-night show pulling lower ratings than 100 Questions this summer is Moonlight on The CW—reruns of a two-years-canceled series from another network. Imagine How I Met Your Mother rewritten by brain-damaged chimps who've been forced to watch every Friends episode from the '90s, then acted out by JCPenney models who envy the mental capacity of the sitcom's writing staff. Throw in an obnoxious laugh track from an audience that must be watching a completely different show or a reel of cattle decapitations, and you have the worst NBC "comedy" in a decade. Yes, counting Joey.

The Forgotten, Three Rivers
Saturday, July 3 (ABC, CBS)
Series Finales: Why ABC is burning off the final two episodes of the critically trashed/viewer-rejected The Forgotten (poor ol' Christian Slater's second canceled series in as many seasons) instead of cult favorite Better Off Ted (also canceled, also with two unaired eps in limbo) is beyond The Only TV Column That Matters™. Showing the final Three Rivers (hospital drama about organ donors and the good-lookin' doctors who transplant 'em) makes more sense: CBS has to keep star Alex O'Loughlin's profile up to promote his upcoming Hawaii Five-O remake/probable cancellation trifecta; sister net The CW obviously can't do it all alone with his old Moonlights.

Warehouse 13
Tuesday, July 6 (SyFy)
Season Premiere: Last summer, Warehouse 13 became one of the biggest new hits in Sci-Fi/SyFy history—even though it's not a great show, this at least saved us from another hour of Ghost Hunters Kindergarten, Psychic Cats or some other crap reality filler. The setup is simple: Warehouse 13 is a South Dakota (!) storage facility for supernatural artifacts; two Secret Service agents (Eddie McClintock and Joanne Kelly) have been reassigned to keep tabs on said artifacts, track down new finds and regularly argue in a cute-sexy manner while looking impossibly pretty in drab suits. Worked for The X-Files, still works for Bones, and it works so well here that McClintock and Kelly float Warehouse 13 over a river of sci-fi cheese and cliches (does there always have to be an eccentric geezer scientist?). Dumb summer fun, defined.

Hot In Cleveland
Wednesdays (TV Land)
New Series: And here's dumb straight-up, defined. Hot In Cleveland debuted to record TV Land numbers a couple of weeks ago, riding mostly on the bizarre phenomenon that is the Betty White Pandemic. So what if the actual stars of this sitcom are Valerie Bertinelli (One Day at a Time, Jenny Craig), Wendie Malick (guest on every series in TV history) and Jane Leeves (Frasier and one of my favorite tube obscurities, 1986-88's Throb—Wiki it)? Premise: While flying from Hollywood to Paris, this downside-of-40 trio of an author (Bertinelli), ex-soap star (Malick) and eyebrow-sculptor-to-the-stars (Leeves) land in Cleveland, where the living is cheap (especially when your landlord is Betty White) and Attractive Women of a Certain Age are considered "hot." Naturally, they decide to stay; hilarity, random Drew Carey Show references and the most painfully amped laugh track since 100 Questions ensue. And I can't look away. Help me.