Have I got a deal for you: Become a Rapture business partner! 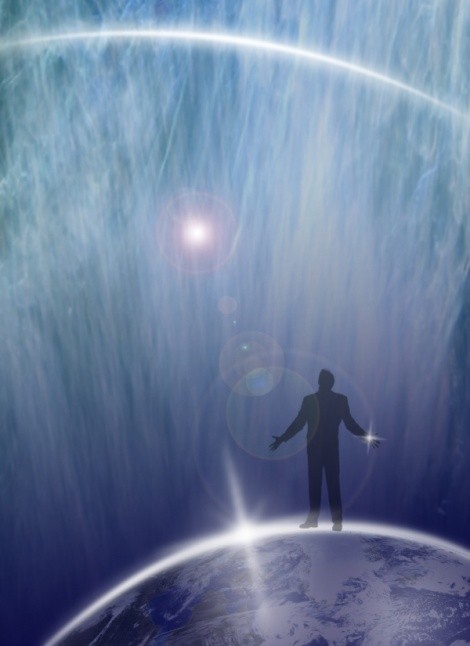 “Hearken, all ye denizens of Earth—both saved and unsaved—the time is nigh. Nay, it is here. All true believers shall be Raptured into heaven on the 21st day of May in the Year of the Lord Twenty and Eleven. The exact hour is not available, and the day lasts 48 hours, including all time zones, so please be flexible.”

OK, that’s not a quote from some sacred text, but Harold Camping, the 89-year-old president of a Christian broadcasting network and part-time math wizard, has painstakingly computed all this from the Bible. His prophecy has gained traction among a sizable group of loosely affiliated followers, and his prediction now graces over 1,000 billboards and the sides of vehicles across the land. Never mind that Camping made similar forecasts for 1994; this time he has it right without even a qualifying “maybe” like he used then. A worldwide super-quake will accompany Camping’s estimated 200 million faithful making their aerial exit, and the even more thrilling conclusion will follow in October when the entire planet is consumed by fire.

Fortunately, I’ve designed measures both for those moving onward and upward and for those who, as the popular book series says, will be “Left Behind.”

First, if you’re not saved, don’t get into a vehicle or airplane with a confessed believer at the wheel on May 21. They’ll vanish (“in the twinkling of an eye,” in St. Paul’s words) and you could meet your demise even sooner than you would otherwise during the ensuing five-month hellscape.

To those who’ll be carried away: Isn’t it a shame that all your worldly goods might lie about rotting after you’re gone? There’s an off chance that some semblance of civilization will persist, and your assets and properties could be used to bring last-chance salvation to those few remaining souls in remote parts of the globe who’ve never heard the good word. That’s where I come in.

I used to be a believer and could be again (I absolutely promise) if a quarter billion people disappear without a trace. Hell, I’d do it for 144,000 (See Revelations 7:3-4).  If I’m not earthquaked flat, I’ll do everything I can to bring salvation to any sincere souls who have somehow been overlooked, even if I’ve blown my own chances. But I’ll need your help.

Things are tight right now, but I could be the planet’s most committed and best-equipped missionary (I’m thinking private 747 here) if enough of you cosmic ascenders will leave me all that stuff you’ll never need again. Just fill out this convenient form and send it to me c/o this paper: 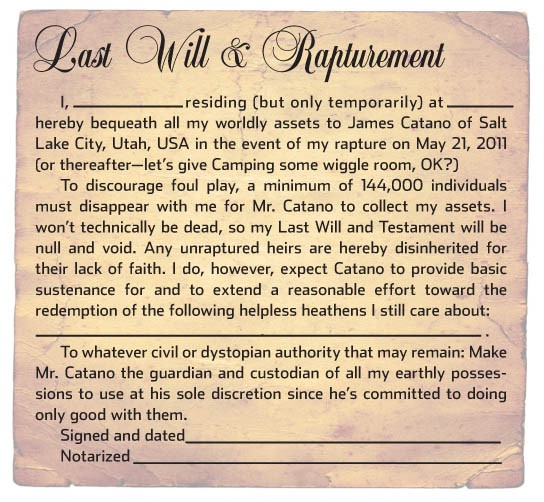 Finally, if you don’t think you’ve properly confessed, don’t have adequate faith to try, believe you’ve committed unpardonable sins, or otherwise don’t qualify for the Rapturenaut corps, let’s you and I do some business!

Note: This is not an offer for an investment or a wager (I think I’d get into legal trouble for that). Do, however, send me $100, and I’ll make you a “Rapture business partner.” After the great event, you’ll share in the property and assets of those who’ve left me everything. I’ll be allocating half the entire take to my $100-a-pop partners. Half may seem light, but I did come up with this idea and will have all that last-ditch salvation work to finance.

Some, no doubt, are thinking I’m a walking-dead scumbag like those who mocked Noah for building an ark or chided Abraham for ducking out of Sodom and Gomorrah. But having witnessed the 1987 Harmonic Convergence, cult suicides without any of the predicted cosmic aftermath, the Y2K bust and little in the way of my own profound enlightenment unfolding prior to the end of the Mayan Calendar in 2012, I’m growing a tad skeptical of apocalyptic endings. But don’t worry: Witnessing the Rapture from ground level will snap me right out of it.

Besides, you have to admit that Rolex-wearing, pompadoured televangelists, Florida Quran burners and armchair celeb theologians such as Glenn Beck, Kirk Cameron and Stephen Baldwin make it nearly impossible for us agnostics to get behind any program that lacks hard evidence. But, honest to goodness, I’ll be cured of cynicism as soon as I see empty clothes falling to the sidewalk.

Oh, and if I mess up and get saved prior to May 21, I hereby leave everything to my remaining partners.

Now, forward this far and wide. If it goes viral, I could be the post-Rapture fusion of Bill Gates and Billy Graham. I’ll use your assets only for righteous purposes. That’s my solemn promise. Act now! My letter opener is standing by.