Compelling action, not much else 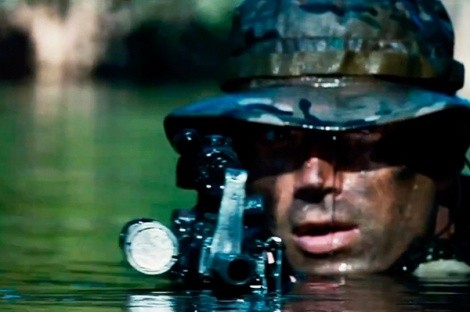 Plenty of movies let you know fairly quickly that they’re going to be excruciating. Far rarer is something that starts out excruciating, then becomes utterly fascinating. And rarer still is a movie that, after making that 180-degree turn, pivots back to unbearable again.

That’s the curious experience of watching Act of Valor, a military thriller that prominently advertises that many of its “actors” are, in fact, active-duty Navy SEALs. This thinly fictionalized squad starts out on a mission to rescue a hostage CIA analyst (Roselyn Sanchez) in Costa Rica. But they soon discover a connection between the analyst’s abduction and a terrorist plot involving drug smuggler Christo (Alex Veadov) and Chechen-born extremist Abu Shabal (Jason Cottle).

It might not shock you to discover that professional soldiers are not necessarily very good actors. But directors Scott Waugh and Mike McCoy put them even further into cinematic harm’s way by cranking up the melodrama, giving us the tearful goodbyes as Lt. Rorke (Rorke Denver) heads into action, and reminding us as often as possible that Rorke and his wife are expecting a baby. Any time Act of Valor tries to drive home that these brave men are also just ordinary guys, it fails miserably.

Then the missions begin, and suddenly Act of Valor becomes utterly engrossing in its battlefield verisimilitude. Perhaps even more compelling than the guns-blazing action is a scene in which a Navy interrogator whittles away at Christo’s cocky demeanor. It’s one of the most effortlessly engrossing psychological power plays you’ll see on a movie screen.

Too bad, then, that the movie has little to offer after that but variations on the theme of chaotic urban warfare—thoroughly authentic but generally uninvolving, an experience akin to watching someone play Call of Duty. You may walk out with even more respect for those who devote themselves to keeping us safe—just not so much respect for the talents of the people who made this movie.